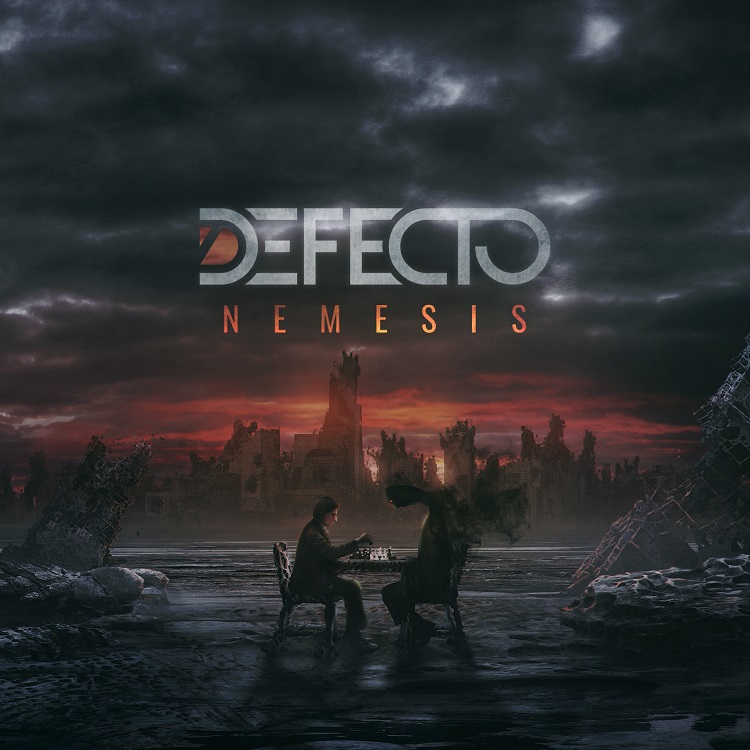 The cover of the album was very much inspired by the first two songs – „The Final Night of Silence“ and „Nemesis“ – and can be viewed as a quite literal interpretation of the „battling inner demons“-theme. On the cover, you see a dark, twisted figure playing chess with a man; symbolizing an inner struggle to gain control.

THE FINAL NIGHT OF SILENCE

Frederik: This song is actually an intro that sets the scene for the entire album, an “overture” if you will. It is quite dark and has a very ominous feel – foreshadowing the themes on the rest of the album. There are no lyrics, but thematically it was imagined as being the „final night“ before an inner war within one self begins. Bonus fact: the composition was created/recorded using only digital (virtual) instruments on the computer in Sonne’s studio. This makes certain things a lot easier (like, not having to pay an orchestra of 50 people), but also means that Sonne had to sit and try to make hundreds of virtual instruments sound realistic, which is no small feat. In the end however, we were very happy with the result!

Frederik: Directly following in the thematical- and atmospheric footsteps of the intro, Nemesis serves as the album’s first “real” song, and is also one of the singles from the album. It is a fast-paced, intense and catchy song; a lot of material was packed into this one despite it’s short (3 minutes). The chorus is quite high-pitched and somewhat difficult to perform live, but the whole song just has a great vibe that really works well when we play it at our concerts.

Frederik: This is the third single from the album, and another one of the „darker“ songs on the album. It was actually written quite a long time ago – even before we released our first album, Excluded. It has a super cool main riff, and a really powerful and catchy chorus. The verses of the song also features some really cool alterations in the riff and melody that changes between the minor/major chord, making the whole verse sound somewhat “unhinged”, as if the whole thing is starting to split at the seams.

Sonne: The lyrics deal with the metaphoric notion of falling; plunging into a darkness without end. You’re feeling the helplessness and futility of it all; constantly running around in circles, with no promise that things will ever become any better.

Frederik: Yet another single – the first single that was released, in fact – and arguable our most fun and addicting song to date. It was inspired by the 50’s rockabilly/Elvis style, and has a danceable feel. It’s almost impossible to stand still while listening/playing this song. Good for starting the party at our concerts!

Sonne: On the surface the lyrics might seem somewhat straightforward and direct, describing a sort of „psycho person“ – like a bounty hunter/hitman, or a “clean up guy” that comes and takes care of business once it’s out of your own hands. However, it was actually written as a metaphoric way of addressing how we utilize exterior forces to help us deal with our own inner conflict; taking care of the „bad guys“ of our psyche, so to say.

Frederik: This is the first song on the album where you get some glimpses of the more technical/progressive side of the band, sounding more like some of the „djenty“ bands out there (although not necessarily drawing inspiration from them). Some meaty, brutal riffs in that song for sure. And also one of the most difficult verses to sing on the entire album.

Sonne: This is basically a song about a broken heart. Although that sounds a bit depressive, it is actually cautiously optimistic – now you’ve reached a point where you can finally see beyond the scars, you find that you’re on a path towards something better.

Frederik: The ballad of the album! But not in the typical sappy „romantic“ sense – to the contrary, it is a very dark and somber piece, and like the intro, almost written/recorded exclusively using virtual instruments (apart from a few acoustic guitars and the vocals, of course). Probably the darkest song on the album, but mainly just because it is so atmospheric. Also a song that inspired the scene seen on the album cover – the apocalyptic, hopeless feeling that eminates from it.

Sonne: Lyrically, it is actually serves as a „prequel“ text to The Nameless Apparition, the song that came before it on the album. It’s about begging for a specific person to return to you, even if it will destroy you. You pray that he/she being there for you and will shed some light on your path, and hope this person will see clearly and reciprocate the love you had. And no, it is not religious!

ODE TO THE DAMNED

Frederik: This is another of the more progressive songs on the album, and a quite long song. It features a lot of intricate/technical playing, and is definitely one of the harder songs to perform live. The intro, which was recorded using an acoustic guitar we had to borrow from a store, took at least 5 million recordings to get just right. It has a really gloomy and foreboding ambience, which seems to take hold and spread through to the rest of the song.

Frederik: Ode was written mainly with a certain atmosphere in mind – a ominous feeling that I felt when I wrote the intro acoustic riff. Later the song/lyrics merged into a more metaphoric way of addressing inner demons, keeping in touch with the theme of the album. Everyone has a dark side – and depending on how you choose to act, you can either try to control it, or you can accept it at let it run your life. The main musical inspiration came from the soundtrack to a PC classic – Diablo 1!

Frederik: This was initially thought to be another single from the album, due to its very infectuous drive and catchy chorus, but was actually for the very same reason not chosen for this – we wanted the singles to more accurately reflect the „darker“ theme that the album represents. It is however a very cool sort of rock n‘ roll song that’ll definitely stick in your head.

Sonne: Gravity is about trying your best to keep your feet on the ground when things are getting out of hand emotionally. The lyrics in the chorus – „Gravity hold on to me again” reflect this, i.e. don’t let me lose touch, help me by holding me down.

Sonne: This is a song that definitely sticks out a lot on the album; due in part to its more „electronica“-sounding inspiration, and later in the song due to the quite heavy breakdowns that the song features. It is quite melodic however, and has a super groovy main riff.

Frederik: A lyric dealing with the end of a relationship; the confliction emotions where both longing and aversion towards the other part can lead you to act and think in ways you hadn’t thought you were capable of – both good and bad. Musically, the song was mainly inspired by Pendulum! Thus the electronic references.

Sonne: This song is actually a hybrid between what was supposed to be two songs – Sonne had written a song, and Frederik had a song, and in the end they worked better together than by themselves, so they became “Before the Veil”.

Frederik: Lyrically, this song relates to extremism with regard to faith and how communities of believers acting according to ancient doctrines and ideologies can lead to hate and violence. Musically, it was at least in part inspired by Amaranthe and Malrun (another danish band in which Sonne sings).

WE’RE ALL THE ENEMY

Frederik: The all-out balls-to-the-wall metal song on the album. A really fierce, frenetic and extremely fast paced song that only wants one thing: to explode and strike you down with its soundwaves. Still has a very melodic chorus, and if the rest of the song hadn’t been all growls and trash-metal, it could have served as a potential single for the album.

Sonne: This is the first political song I’ve ever written. Basically, the message is that in a warzone, we’re all the enemy. No one’s innocent, no one’s good, and the question about moral superiority is entirely subjective. On either side, the opposing force is seen as an evil enemy, and only in hindsight will the winners be able to dictate who was „on the good side“ (i.e. the winners) or on „the bad side“ (the losers). The song is also dedicated to the „psychos of war“ – the few soldiers with a specific mindset, that go into war, believing themselves the good guys, the heroes come to save the day. They will do whatever they want, feeling that the end justifies the means and that whatever side they’re on is righteous, but in reality, they have misunderstood what they’re actually there for, and may commit terrible acts in the „path to freedom“, or whatever.

Frederik: This is another song that was actually written well before our first album, Excluded, came out in 2016, however most of the song was re-written/rearranged for this release. It is the „epic“ to end the album, and is also one of the more technical songs on the album. The middle heavy part has a Opeth-esque feel (Sonne in particular channeling some Åkerfeldt in his growls). The middle section also has a really crazy instrumental part, where we get to play a really fast, frantic unison-section, entirely composed using diminished scales. Challenging to play but also fun!
Also, we placed a little easter egg in the very end of the song.

Sonne: The song deals with depression; about feeling so much pain that you feel like you’re going to die. Heavy stuff!