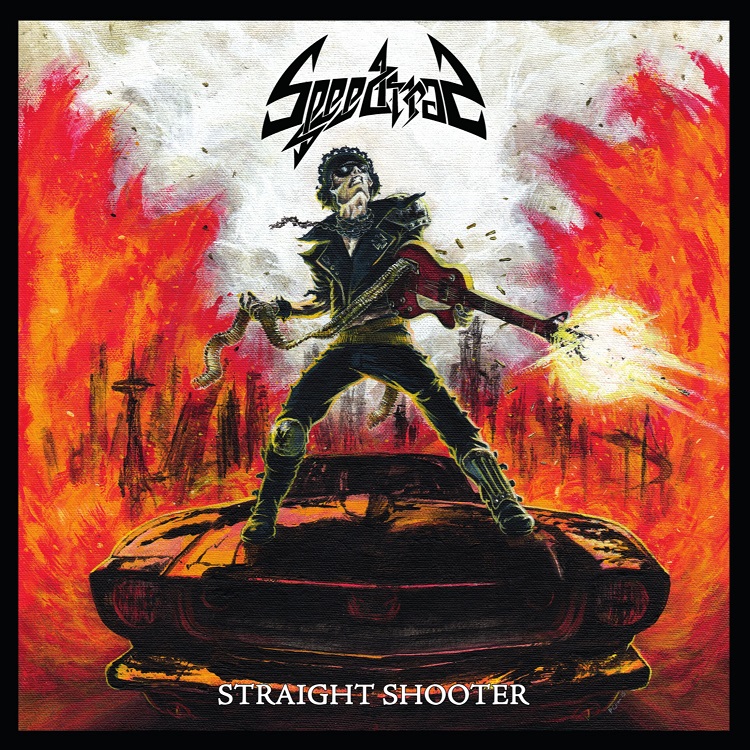 Jaakko brought the main riff for this one. It’s a Speedtrap kind of way to start the album going out all guns blazing. The main riff’s got a real Axe Crazy-feel to it and the ending makes it one of the most diverse tracks on the album.

I wrote the main riff while on tour in Germany in early 2014. Then it just got stuck for a long time until we finally finished the song right before the studio. This one starts off as more traditional heavy/speed metal, which then turns into Razor/Destructor-style aggressive thrash towards the end.

Originally this song was supposed to be way slower, but after a few rehearsals it turned out it would be a lot better if we picked up the tempo a bit. It’s really a pain in the ass to play this on drums and guitar since there’s no cheating with the hi-hat, and guitar tracks are just downpicking throughout the whole song. The rock n roll solo part balances the song a bit though. The lyrics are about the ruling class getting away with basically everything, while the less-fortunate always take the fall having no other options.

One of the two long songs on the album. This one starts with a huge-sounding intro before turning into mid-tempo heavy metal. We wanted to make this album more diverse than Powerdose and this is defeinitely the kind of song we were missing from the first album. There’s not as many riffs as you’d expect for a song of this length and the vocals sort of carry the whole song while guitars are more in the background.

The B-side needed to have an explosive start and ”Serve Your Masters” was perfect for that purpose. You can definitely hear the punk-influence here – both musicwise and lyricwise. Fast paced drumming, aggressive riffs and lyrical content dealing with the oppressed working class, while the out-of-control solos add another layer of icing on the cake. This’ll make you go crazy for sure.

There’s a lot of Motörhead/Tank -influence here and it’s easy to hear. We were struggling with the vocal arrangement in the studio since the song wasn’t ready when we started recording, but eventually through intense brainstorming we came up with the simple-yet-catchy chorus which made this the obvious choice for the 7” single.

Being the longest track on the album and clocking in at 6:40, this one also has the oldest riffs we used on this LP. I wrote most of the riffs a loooong time ago and we tried to come up with a song like this for years until it finally happened in 2015. I think everything except for the main riff was written somewhere between 2009 and 2010. ”Heavy Armor” is a song unlike anything we’ve done before, but in a cool way it still sounds like a Speedtrap song.

We wanted to have a go-down-fighter as the last track of the album since it wouldn’t have been a Speedtrap kind of way to end the album with something like ”Heavy Armor”. From the painkiller-ish vocals to the dueling guitar solos everything is pretty much getting out of hand and ready to go over the edge all the time. I think it’s a perfect way to end the album like this; leave you gasping for air as if you’d just got beat up by the strongest man on earth.