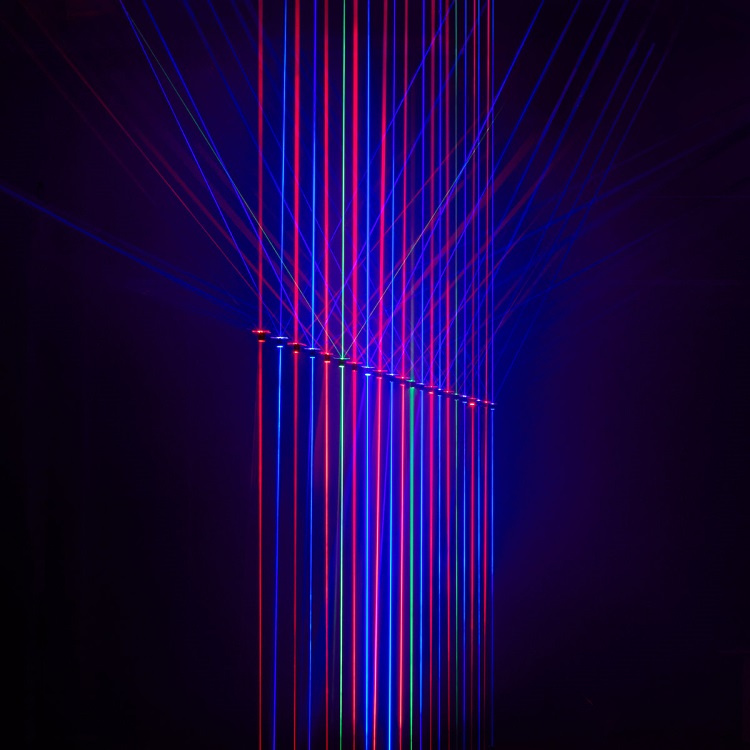 We created the art with lasers in a huge and freezing cavernous space in Deepest, Darkest Yorkshire. Some of the lasers were pretty powerful and dangerous in the wrong hands! The art came before the title so the name of the record changed the meaning and nature of the artwork for me. Now I see the line of Laser diffractors themselves as being ‚The Great Distraction‘, causing the direction of progress to be split into many directions, away from the fundamental goal of advancement. That’s just my personal reading of it, but it was interesting to do it that way round – we felt the image captured the music brilliantly, but it was nameless as a work of art for so long and in the end the name was specific enough to totally change what the visual metaphor meant for me.

This track definitely feels like the heart of the album and the band for me. No messing around here. It really has an energy that feels like it captures everything that we’re about with its locking polyrhythms and sense of yearning, hope and melancholy. It makes the hair on the back of my spine tingle when we play it. What a joy.

There’s a kind of playful, childish joy at the heart of this tune that often brings a smile to my face. We were searching for a cherry on the top of the music for some time – a final hook or melody to complete it. We sent the track to Wayne Coyne who instantly proclaimed his love for it – which was a total boon. Wayne and Steven were like a creative fountain and we had immense fun playing with what they sent back and honing it into the final track that you hear.

In some ways this track is understated but it’s also built on a pretty blistering groove which gets under your skin and creates a really interesting headspace. The vocal loops were created using a module that samples bits of random radio broadcasts which are then chopped and effected.

What I love about this track is that the melody is up front and central and the timing of the groove is odd enough to turn something which is quite obvious into something totally hypnotic. It’s definitely a tune to get lost in. I love the steady build which gradually turns a solid groove to a blistering euphoric peak. I think it’s got to be hands down my favourite on the album.

DEEPER IN A SKY (TE)

This was inspired by an Isaac Asimov short story called ‚The Last Question‘ about an artificial intelligence that survives beyond humans and onwards until the end of the Universe, which is where we find it musing about its existence. This idea was in turn originally inspired by Indra Dunis from Peaking Lights who sketched some ideas on this track last year, which had a slightly robot-vibe with the effects she’d used. When we’d finished the final version, Lee persuaded Katie Harkin to give life to this machine!

We had this tune almost finished for over a year before we broke through the barrier of what to do with the awesome bassline after it drops in the second half. It was only when we finally chopped it up for a switch section that it started to fall into place, and then Pete finished it off with a sweet melody for the climax. The soundscape outro is a sweet moment too. The noise at the start of this and after Deeper In A Sky contains some Cosmic Background Radiation (radio waves left over from the Big Bang).

This is a track that went through a number of different permutations and the version that ended up on the album is a long way from how the track started out. The vocal line that Vincent (from Django Django) put down was incredibly catchy and immediately elevated the tune. For the album version we remixed Vincent’s gold into something much darker and moodier.

EVERYONE IS FALLING (MT)

I feel like this track is a deep exhalation. It’s simple and pure and I feel cleansed after it finishes. Like aural meditation.

The premise for the name Radio Decay ties vaguely in with Deeper In A Sky, and it refers to the radio signals left by an extinct civilisation (no prizes for who we could be referring to here) which are drifting evermore thinly and quietly across the cosmos, awaiting their possible discovery where the reasons of their fate could be deciphered. The melody at the end is played on a kora, which is a West African harp, and then granulated to create the stuttered effect.

We wrote this track around John’s vocal which is so distinctive and compelling. It really feels like it belongs at the end. I love the arpeggiated music box and accompanying melody which Lee created for the end section. No way to follow that except with silence! John sings ‚a fake distraction‘ here, but we liked the universality of ‚The Great Distraction‘ and all its connotations – especially given the interesting dark period of the world we are experiencing at the moment. John’s take on the track title is that it’s ‚about getting rid of bad self-dialogue and getting new ‘tapes‘ to play yourself‘.