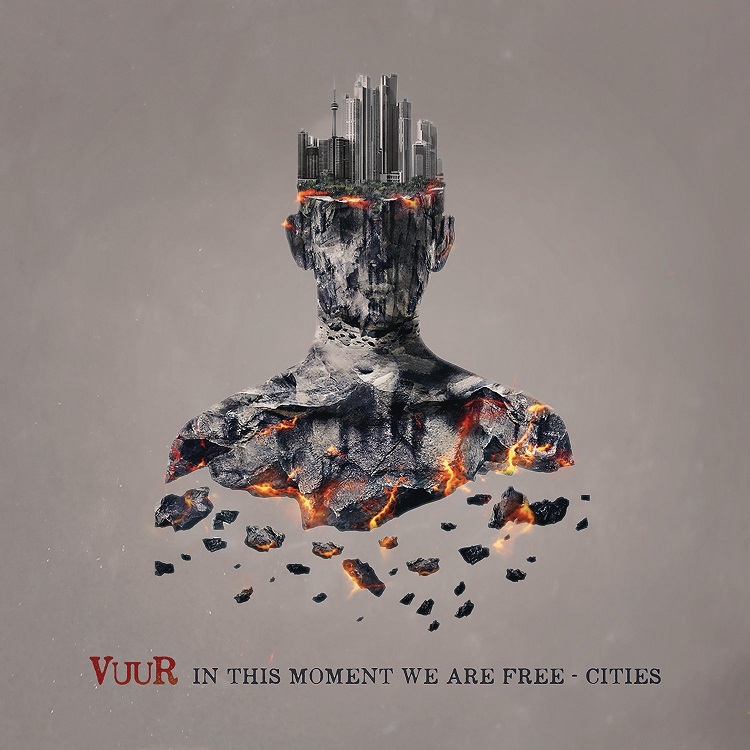 For many years, I have traveled the world playing music. I love traveling! It inspires me to write new music and I learn a lot about myself and about the ways of the world. In every city I feel a another kind of vibe. Culture, climate, food, and people. Every place is different and unique and for many years I felt the desire to write a song for each city I visited. So I started writing in airplanes, in hotel rooms and at home. Only now, with my new band VUUR, I felt that I could genuinely accomplish this concept. I am extremely proud and happy with how this album and these songs turned out. We live in a dual world, we live with darkness and light. Every day we make choices, big or small, wether to go towards one side or the other. It is the one thing in which we need to find a balance and in the exact middle we are able to find peace, in the ‘here and now’. Not the past, not the future. In that exact moment, we are free. In one way or another, every song deals with this duality and the search for balance. I am a dreamer and a fan of positivity and love. I work very hard to make my dreams, and our collective dream of peace come true trough music and appreciation. This is how I can contribute.

Jord Otto is the newest member in VUUR. We knew he is a wonderful and charismatic player and during the writing process of the album we found out he is a great composer as well. He comes up with these rich melodies and intricate guitar parts.

This song is about Berlin post WWII. The angel-like figure on the Berlin Victory Column was raised there to commemorate military victories, but in the song the city speaks to her and asks her to help it to overcome troubled times. The city asks her for forgiveness and strength.

This song deals with the city of Rotterdam, just before WWII breaks out. The lyrics are the thoughts and fears of the city itself. She knows that something unbelievably dark is upon her, but she has no idea what or when. Hope and memories of warmth and glory days keep her together.

We can still feel and experience the aftermath of WWII in our everyday lives. We are reminded by our former generations about the devastation and the pain. We educate our children about the past and on how our parents and grandparents rebuild this part of the world. We love and appreciate our birth ground and we will never take it for granted.

I wanted to write a very doomy song. Heavy and in a slow tempo. Joost and I came up with this great riff, I love it.

THE MARTYR AND THE SAINT – BEIRUT

This song is written by our guitar player Ferry Duijsens. He’s been involved in almost everything I do since 2011. He is a man with many talents. He surprises me every time with the way he interprets art and music. He is very humble and when almost all the songs for the album were written, he said to me; I have written some music, maybe you’ll like it. He came up with this absolute beauty of a song! He always comes through. He is our secret weapon :)

Beirut is a city with such a rich history, it’s one of the oldest cities in the world and a lot has happened over the centuries. What stands out are the multiple religious groups living together in a relatively small city. “A fountain of diversity. There have been many conflicts and I feel, whenever I talk to people there, that they are strong and they have the will to make it work. To me they try to unite the fighter and the peaceful soul in themselves.

Ed Warby came up with such amazing drum parts for this song. It’s very complicated, but very groovy at the same time. Ed and I go way back, The Gathering and Gorefest toured together in the 90s, I’m super proud to have him in my band. He’s a legend.

San Francisco suffered a major tragedy in 1906 when one of the most severe earthquakes to this day in the US occurred. The lyrics are from the perspective of the inhabitants in a timeline-like manner; before, during and after the event. The earthquake itself whispers hauntingly “Feel me” to instil fear in peoples hearts. The high pitched voice represents the fire truck sirens.

In most cases, big cities have a rich history and it’s not always a positive history. Wars and natural disasters scar these places, but they do make them what they are today. Even nowadays life can be extremely difficult in these vast and crowded places, but for this album and these songs I wanted to emphasize the beauty, the abundance and the glory of our world. I wanted to share the sense of freedom and positivity that comes with the experience of traveling and visiting the different countries on our planet.

I met Mark and the Periphery guys on the very last day of the Progressive Nation At Sea Cruise, but we have become great friends ever since. At one point I asked him if he would be interested in writing together for the VUUR album and he sent me this wonderful song. I especially love the middle part which is both intricate and melodic.

In 1666, the city of London was struck by ‘The Great Fire’. This overwhelming, devastating catastrophe/crisis took everybody by surprise. The lyrics are partly the fire speaking to the inhabitants, and partly the inhabitants praying that they will get out of there alive. The ‘halo’ part is the moment when the smoke/smog slowly comes in and eventually saturates the entire city. This was the first song we release as it has most the elements that represent the album and the band. It’s heavy, progressive and melodic.

We wrote this song together with Esa Holopainen from Amorphis. It’s easy to recognize his melodic fingerprint in his main riffs. His music speaks to me in the strongest way and it inspired me to write about Santiago.

Santiago is one of those cities in which I always feel at home and when I leave, I immediately want to return to it. It has an open and inviting nature. The people have both a deeply melancholic as well as a positive heart.

When you fly over Mexico City, you can truly see the vastness of this city and once you come closer, you more and more see the details, the houses, the people moving around. Although this city is dense and chaotic, you can find many beautiful people and places. At night, there are millions of lights flickering, like diamonds.

The music was written by Daniel Cardoso, who is in Anathema. He and I co-wrote my Album „Everything Is Changing“ and we’ve stayed in touch ever since.

Johan came up with some pretty interesting bass parts for the whole album, but for this song in particular. His bass sound on the album is very rich, there’s both darkness and beauty in his playing style. He plays these super heavy basses – literally heavy.

YOUR GLORIOUS LIGHT WILL SHINE – HELSINKI

Although Helsinki is now a beautiful, peaceful, self-sufficient city, from the time it was formed until well into the 20th century the Finnish struggled with the occupation of Russia as well as a civil war. I see Helsinki as a beautiful, pale and tall man with a pure heart, wanting to break free from the shackles of the past.

For a couple of months Joost and I would meet every Tuesday to write together. This is one of our songs and I especially love the strings in the intro. We’ve played this one live already on a couple of summer festivals and even though the audience didn’t know any of the VUUR songs, this one seemed to be an audience favorite right from the start.

Istanbul to me, feels like a strong man’s embrace. Like a powerful being, protecting me from harm. I literally fell in love with Istanbul the first time I set foot in that city. The people, the culture, nature, everything. There is a sense of melancholy and a powerful strength that runs through the heart of this city which I love very much. The initial idea of the song was written by Esa Holopainen from Amorphis.

Paris, imo, is a city of freedom. Cultural and spiritual freedom. I feel the need to shelter and to nourish it. Like we should with our own lives and the world around us.

We wrote this song together with Mark Holcomb from Periphery. At the time Mark came up with this idea, he was busy touring and on the road all the time. He sent me a quick iPhone video recording of a riff to start up this song and told me that he would record it properly as soon as he was able, but the melody and the emotion in that short vid already struck me so deeply. I immediately wrote almost all the words and vocal melodies to it.