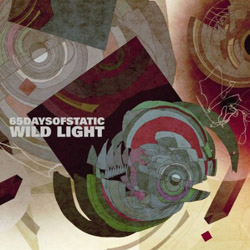 Entropy. The great leveller. The Paris Catacombs. Have you ever been down there? A dry silence. Incredibly peaceful, down amongst the skeletons. An infrastructure of skulls. It sounds like we’re a bad black metal band but we’re not, we’re just kind of into the idea of infinity. A mathematician once tried to explain to me how there are different types of infinity but I’m just a musician so it was hard to get my head round it.

I think it’s something like, there’s a ‚finite‘ infinity – like the number of grains of sand on planet earth. Technically, that’s a number that has an end point. But working out what that number might be is impossible. I think maybe the same holds true with atoms in the universe? Check with a scientist.

But then mathematical infinity is altogether different. That’s actual infinity. You can start counting and just keep on going until the sun explodes and the universe dies a cold lonely death and the numbers will never run out.

Why is this song called Heat Death Infinity Splitter? I’m not sure. Something to do with the Scottish sculptor Eduardo Paolozzi, I think. I wish I could be more specific than that but I can’t.

Fractal life. It’s a lot like infinity, I suppose. The ‚Many Worlds interpretation‘. Rainbows; colour spectrums; wavelengths. There’s a lot of waves on this record, I think; a lot of sea metaphors. There’s more spaces for frequencies to oscillate than on previous 65 albums. This song reminds me of the skeleton of a skyscraper built from granite and cold, dark metal. Who built that? How’d they get planning permission?

When life turns into a Ray Bradbury novel, the only way forward is to write songs like this.

All I really know about The Undertow is that it came from a piano, originally, but got turned into noise for a while, before the piano came back towards the end. Ebows and arrows.

Imagine if we just all decided to stop walking into the future. Imagine the collective sigh of relief. You’d probably hear it round the world; a disembodied choir of happy ghosts. The free markets would shrivel and turn to black dust, like a vampire exposed to sunlight. We’d frolic in the unspoiled fields of history, keeping one eye on the path we had ploughed to get here, so as not to lose our way, but spreading ourselves sideways instead of building top-heavy pyramids. How can you a single civilisation be so hopeless as to manage to engineer something as stupid as a top-heavy pyramid? I’m not even sure the laws of physics agree with that.

Now imagine the opposite of all that. That’s Blackspots.

In a small village outside Katowice, Poland, a lonely teenager built a rogue algorithm late one night in 2008. It was at the peak of the global financial collapse. The markets were turning into black holes and bankers, instead of jumping off tall buildings like the days of old, were hiding in their private jets and throwing all their might at ripping the safety net out from underneath the rest of the world.

Like a wild fire in slow motion, the algorithm spread off her laptop, corrupting her phone. Downstairs her father, drunk and asleep in front of Polish cable TV, failed to notice the static take on a rhythmical pulse as the code spread through the mains electricity of the house. By the next morning, the town’s power supply was in thrall to the algorithm’s formula. It took control of the street light system to fashion a scruffy but serviceable matrix that could be seen by the satellites up above.

The algorithm studied the markets, the collapse, the turmoil, and it illuminated and darkened the streets in that small Polish town to display a message.

The black eyes of the satellites took note.

‚KEEP AN EYE ON GREECE TOO‘, the algorithm spoke with its clumsy town-tongue.

‚THE REST OF IT WILL TOPPLE AS WELL, SOON ENOUGH‘.

The satellites watched on impassively.

Taipei. A city that keeps its pipes and wires on the outside. A visible infrastructure. A city-sized exoskeleton. it’s important to know how cities work, I think. Going to Taipei is a good lesson in that, somehow.

You know there’s that Dutch space program that put out an open call for people who were willing to take a one-way trip to Mars? Well, Joe really wanted to apply. We wrote this song as his pitch. It’s great, but, for selfish reasons, the other three of us don’t want Joe to go to Mars, because then we wouldn’t be able to be a band any more, so we wrote this song in 7/4. Martians hate 7/4. He probably won’t get picked.

Right now we’re on tour. It’s a place where everything makes sense and nothing makes sense simultaneously. These days of fast travel are surely almost over. This way of living is not sustainable. A hundred years ago it would take a week to cross Europe. Now we are spending weeks in Europe crossing back and forth countless times on a tour bus the size of a spaceship… None of this is gonna hold.

There’s an interview from 1996 between Chomsky and Andrew Marr (A BBC journalist). At one point, Marr is contests Chomsky’s ‚propaganda model‘, taking offensive at what he sees as Chomsky saying he is ’self-censoring‘. Chomsky replies:

I don’t say you’re self-censoring – I’m sure you believe everything you’re saying; but what I’m saying is, if you believed something different, you wouldn’t be sitting where you’re sitting.

This is important. It’s important to keep a check on yourself, to work out if you do actually believe what you think you believe. Or if, in fact, you’re lying to yourself.

This party will soon be over.