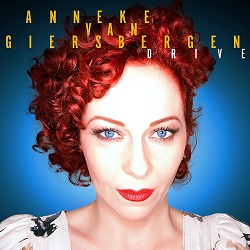 This is the opener of the album and it’s a great mix of power & melancholy. A song about loving life and living it to the fullest. I can’t wait to play this one live.

”Treat Me Like A Lady” is fiction, but I guess every girl has been there. You just want to be treated nice and respectfully. Kinda like the Aretha Franklin song „Respect“. Although I do think that that song is originally written by a man named Otis Redding.

It worries me that some of my friends are taking lots of psychiatric medication without having a proper mental coach. It inspired me to write this song.

I like driving, being on the move, playing music on my car stereo, but I also think that having a certain drive in your character keeps you going. I don’t consider myself as ambitious, because I just love making music and I don’t really focus on success, but I like to ‚go somewhere‘, better myself, explore new styles, so in a way that’s what drives me.

This song is as personal as it gets, because the lyrics in the verses are actual talks I had with my parents. I am a mother myself and I think as a parent you shoot off a child like an arrow, it’s close to you in the beginning, but it gains hight and flies away from you through the sky. That’s the way it should be, although emotions sometimes are in the way.

This is about loving somebody so much, you almost feel the need to apologize ;-)

YOU WILL NEVER CHANGE

I think that changing and adapting yourself to new situations is healthy. I can’t imagine meeting childhood friends and hearing something like: „You haven‘ changed one bit, you are still the same person as 25 years ago“. That would make me feel pretty miserable, to be honest ;-)

I have been friends with Turkish artist Hayko Cepkin for a couple of years now. I have performed with him in Turkey and he has performed with me in The Netherlands. I just love his voice & vocal phrasing and I have been wanting to record that on one of my songs for years. My guitar player Ferry Duijsens had this really cool riff with an eastern-vibe, so I knew this had to be the song. I’m really happy with the way it turned out.

SHOOTING FOR THE STARS

Never settle for less! I love the euphoric feel of this song.

THE BEST IS YET TO COME

”The Best Is Yet To Come” is one of my mottos in life. I don’t like looking back at all. The song is written with a dear friend in mind who had become some sort of passenger in life. The song was meant to wake him up and convince him that life’s for the living.