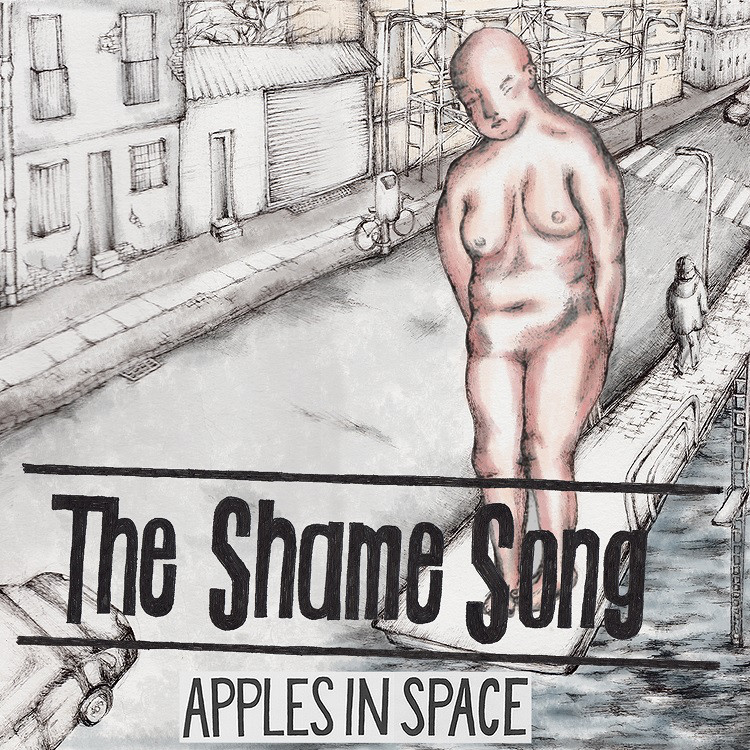 “Shame is a coat I put on and it smells like you”- And “you” is in this song an eating disorder, but could be an addiction, too. Everyone can see it, but nobody talks about it. This song is an attempt to kill that taboo and express something a growing number of people can relate to. We experienced that you involuntarily befriend your mental illness as you feel lonely and distanced from other. It takes over your entire reality. At some point you feel as though there is no border between yourself and the illness. And it becomes a part of your forever. There is no way back, but writing this song was a big leap forward. Jonathan is doing a pretty cool thing with the tom in chorusses. On the album we are combining the folky, Leonard Cohen-ish influences of the first record with 90s alternative garage folk rock/punk bands. I think this song makes it very clear.

UPON THIS WAVE (WE’RE FLOATING)

This is a song about growing up to realise that you can’t live up to your own or anybody else’s expectations. It’s about poverty and trying to escape a world that is constantly moving in on you. If I remember correctly it’s also partly inspired by the writing of Elisabeth Smart.

“Behind Closed Doors“ is a song about non-consensual sex, or date rape, as told by Julie & Phil. Phil is taking the difficult role of the abuser. (This is not a story about Julie & Phil, by the way). As the differences between non-consensual and consensual sex are often very hard to spot, we wanted to show the listener both sides for them to judge the situation on their own. Instead of pointing fingers we attempted to highlight just how twisted the conventional view upon consensual sex is. This is the last song we wrote for the album, pretty quickly, but felt like an essential part to the “The Shame Song” right away as it addresses yet another taboo and something a lot of, in particular, women have experienced.

This is a song about depression, the feeling of constantly hanging in-between and the loss of a loved one. (“Are you winter or fall? Are you something at all? (…) Oh, I feel just like you: Between winter & fall. And I remember the rain hitting hard on the street. Trading kisses like change, watching crappy TV, then November, it came to take you away). We started writing this song in Oslo in 2011/2012 while sharing a tiny apartment with our friend Johanna, just repeating the pre-chorus. The lyrics took a long time to finish. Some just need forever to grow- we have around ten somewhen-to-be-finished songs in our drawer.

A couple of years back Julie & Phil, still living in two different cities at the time, met up in London for two nights. We stayed at Manor Hotel, the cheapest and creepiest, yet most romantic hotel in the city- people would just knock on your door in the middle of the night, but were gone when you opened. We’ve been planning to write a song for Manor Hotel ever since. It’s a song about those early days of our friendship: A love song about two fuck-ups saving each other’s lives. We added some subway/bus noise to the musical part and outro of the song. You should listen to it while on the public transport as it feels like the music becomes one with the environment.

It’s a song about being rootless, staying up all night & being scared of the outside world: “Why do I feel like I’ve been pulled by the root and placed in a vase in a thirdrate hotel room?” There is a bit of a The Smiths-vibe going on as Phil listened to them a lot last winter. Julie could never understand that, though. Janusz & Jonathan recall endless heated discussions about the artistic value of „The Smiths” while on tour.

“All My Things“ is with “November“ one of the first songs written and recorded for the album. It’s the most cheerful tune, we suppose, and the first time Phil picked up an electric guitar for Apples In Space. We are very happy about the synth-sound that Julie found in the instrumental bits.

BECAUSE THE NIGHTS ARE ENDLESS

The longest song on the record, “Because The Nights Are Endless“, is about an abusive relationship. Eventually, even if it takes 6 years, you find a way to forgive yourself for having let yourself get that hurt, and staying with someone who was hurting you. Some experiences fundamentally change you and your view upon everything. All of a sudden, there is a darkness everywhere you look, because you can not unlearn the fact that someone who loved you was capable of hurting you on purpose.

(A TIN CAN) ODYSSEY

“Tin Can” is kind of a country jam-session, a band-in-a-room sort of thing (the whole album is recorded as a band in a room, though). Fuck perfectionism. Fuck mistakes. It’s a song about the (music) press, being on tour and having nothing to believe in except your own success in a world that is spinning to fast- something we’re guilty of but find very questionable. It’s a song written by musicians about musicians for musicians who, in their midtwenties, are still stupid enough to be doing nothing else with their lives than playing in a band. “Well, I guess I need a purpose, some sort of fading hologram I can chase around the city and spend my whole life trying to touch. But it’s getting harder, ’cause I never stay long enough at the same place with the same faces.” And in the end nothing matters as we will all be swallowed by the universe anyway: What a shame!

Our instrumental outro. We love weaving street sounds into music and have created this on the computer one liquor-soaked night in France, shortly before mastering the album. The whole record is an attempt to create something that sounds like Berlin, like a dark autumn night kind of Berlin. Like our Berlin.