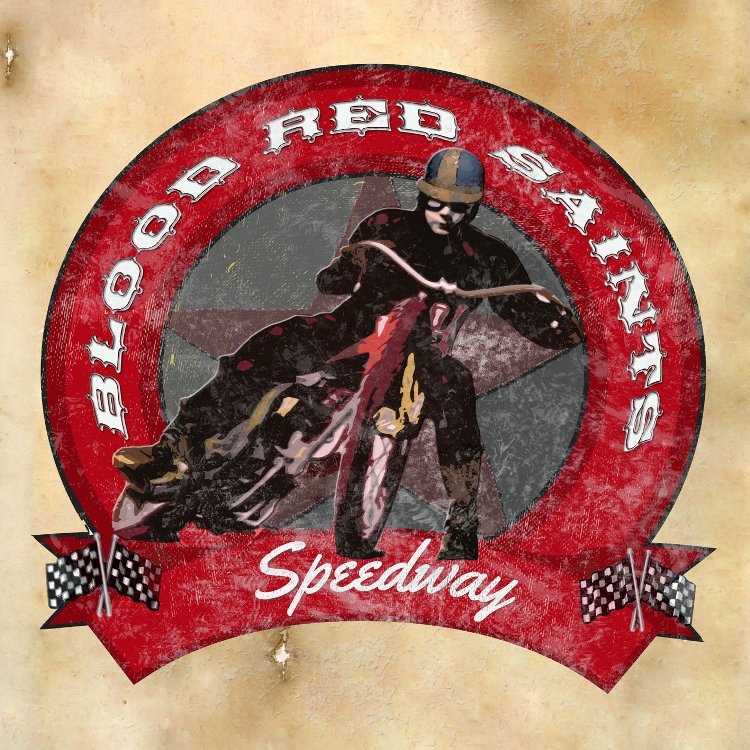 Rob Naylor came up with the concept. We wanted to do something out of the ordinary; we were bored with seeing the same band photos or themes. Rob was in Florida on holiday and saw a ride called ‚Speedway‘. Originally we were thinking of a song title but as the ideas developed, we found stories of a semi legendary speedway team called the Blood Red Saints, who originated in Brooklyn New York in the late 1920’s. Freddie Rendetti was the team captain and leader. We designed the album cover and booklet to try and ‚bring Freddie to life‘.

This was the last track to be written for the album, we had the theme and we needed a song to tie it all together. “Kickin’” is the only track on the album that ties in with the speedway theme. I worked the track up to the demo stage and then passed it on to Lee Revill our Guitar player, who added the riffs and that feel of excitement. Rob did the voice overs in the track, giving it that 1930’s radio commentator feel and finally Pete Newdeck who mixed and produced the album, came up with the chant at the end of the song.

In my mind, I wanted the album to run a little like KISS Destroyer, ‚Detroit Rock City‘ and ‚King of the Night time World‘ always worked together brilliantly for me. With that in mind, I set about writing “Mercy” to compliment “Kickin’”. Rob came up with a lot of the lyrics for this song, commenting on how Religion dictates people’s way of thinking and how flawed that idea can be. Lee Revill played a great solo on this track.

This track was written by Tom and James Martin of VEGA and myself. Tom & James sent me a track they had worked on without any vocals, I added the words and melody and extended the intro to try and give it a little more drama.

I had this song lying around for a couple of years, when we started writing the album, it’s telling the story of how kids play computer/console games and have become desensitised to the reality of death. This ‚Kid‘ grows up and finds himself in a real war, one where he can’t simply switch off the TV. I played it to Rob who thought we should use it. Rob added the speech prior to the solo which increased the sense of drama and then Lee brought the guitar section to us which we were blown away with. The track just came together brilliantly.

LOVE SET ME UP AGAIN

Rob sent me this song title; I came up with the melody and sent it back to Rob who worked on the lyrics. I wrote this one on keyboard and it needed to be more dynamic. Lee added that dynamism with some beautiful guitar work. Pete Newdeck laid down some great drums as he did on all the tracks, no guidance was needed – he just ‚got it‘!

This one talks about what we are doing to our world and how close to the point of no return we could be. Rob did a great job with the lyrics on this one.

Another track that had been written a couple of years earlier, very FM/Steve Overland influenced vocally, the guys in the band heard the demo and decided to record it for the Speedway album.

We wanted to add a different feel to the album and we jammed this track from scratch. We instantly knew it had to have a good time lyric so we set it in the eighties a bit of Southern Boogie got added and voilà! If we could make a video for “Unbreakable”, it would be one of those, camp fire party, good time Kid Rock type things.

WRAPPED UP IN THESE ARMS

We tried about ten different chorus ideas for this, Rob finally coming up with the title that proved to be the catalyst. Again, it has that Steve Overland/FM feel about the vocal. Not as hard rocking as most of the other tracks on the album. Pete Newdeck and I tried to get a gospel feel in the breakdown section and Lee added another great solo.

Lee had a friend called Chris Greer who unfortunately, we lost early this year. They had been together in bands for years and Chris was a big part of the reason how Lee ended up in the Blood Red Saints. Lee wanted to honour Chris in some way and we were writing over at his studio, Lee played this part just warming up. Instantly I knew it had to be included. Technically amazing but melodic sounding. Chris Greer, rock ’n‘ roll.

I had demoed this track some time before the Saints had gotten together, again I played it to the guys and we decided to record it for the album.

I played the idea for “Faith” to Rob, he loved it, we worked on the lyrics but it still wasn’t quite right as a song. Pete Newdeck passed it on to Harry Hess who was mastering the album. Harry came back with this beautiful piano/flute part which just made it all come together. Pete Newdeck added some amazing backing vocals and it was ‚job done‘!