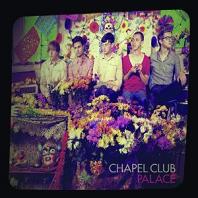 One of Mike’s bedroom experiments with guitar pedals and loops and stuff like that. He made a nice video for it, too, of leaves in Yellowstone National Park distorted and reflected and flickering in the sunlight. I think you can see it on our Tumblr site.

The one with the “Dream a Little Dream of Me” chorus lyric. And what an albatross that nearly proved to be. The simple truth is, it was only ever used as a sarcastic joke – at that point, I didn’t think anyone would ever hear the song. Then suddenly everyone was talking about it! Anyway, this is a moody song, a hate song. No one has yet worked out whom it’s about, but the clues are all there. I had fun writing the lyric, it was like creating a semi-cryptic crossword. I think I’d been reading “Under Milk Wood” by Dylan Thomas, hence the “shells and silvery scales and torrents of blue” etc. My poor attempt to capture some of that maritime fluidity.

The first single from the sessions with Paul Epworth, something a bit more upbeat/up-tempo. Best listened to on headphones while walking along on a bright day with clouds piling up above your head and the trees coming into leaf and all that kind of thing. The lyric comes from a dream I had just before waking on a rainy Monday morning ages ago, after a weekend of massive over-indulgence. It was a very beautiful and vivid dream that I wanted to believe was some kind of omen or vision. But then I was still drunk when I woke up.

One of the first tracks we ever wrote. It’s a song about recollection and reminiscence, looking at the ways in which the natural world can hold a mirror up to our memories and emotions. I wrote the lyric years ago while driving along this incredible viaduct in the French Alps after a big argument with my girlfriend, watching the clouds and cliffs and feeling awestruck but also a bit weary of life. Of human life, anyway.

I always imagined this being a party track, albeit one for people who like their parties heavy and dark and a little bit frightening. But it ended up being more like Sinatra fronting Primal Scream. Musically it’s a pretty full-on, high speed assault. Lyrically it’s about hedonism and the restrictions we place on ourselves – and the desire we sometimes feel to throw caution to the wind and do what we want. I’m not sure I could stand behind this on a moral level, you understand. But sometimes it’s what you tell yourself or your friends; it’s what everyone wants to hear when they’re young.

The youngest of the songs on the album, in every respect: we wrote it about two weeks before the first recording sessions and the entire lyric is devoted to the subjects of youth and freedom – freedom from doubt and fear and age and illness and all the emotional issues that permeate the rest of the record. We wanted to make something fresh and upbeat, and this track was written with memories of summer holidays and light nights and festivals in mind. It starts off slow and woozy and sensuous, then explodes into this driving krautrocky kind of middle section, then bursts into a big repeated chorus at the end.

When we wrote this, I was playing around with how to write a self-consciously “pop” lyric. It’s meant to be a dialogue between two people, a couple whose relationship if falling apart; it isn’t strictly autobiographical, but I guess we’ve all been there. I like that it has the word “darling” in it. I think “darling” is an incredibly handsome word.

My favourite song, the best song on the album.

The intention with this was to somehow evoke a vast, slow-heaving expanse of sea and sky and empty shoreline in a trippy, swirling guitar haze. The lyric touches on drugs and booze and the feelings of self-doubt you deal with in your twenties, especially when you’re in the habit of getting wasted quite often. And I guess it hints at some religious questions, too, about feeling abandoned by God, or the idea of God. Anyway, my favourite part is when the guitars go mental at the end. The weird thing is, the closest I get to believing in some higher power is when we play this song live.

Another early song, and another about looking back – though the wistfulness and melancholy here has a happy ending. It’s another one full of natural imagery. I was reading a lot of R.S. Thomas and Ted Hughes during the writing of all these songs, so I guess my head was full of wild weather and remote places.

ALL THE EASTERN GIRLS

A bit of an anthem now, this started life ages back as a Bad Seeds-esque number called “Ape”. Mike and Alex put together the basic music and sent me an mp3 at work one day, and I wrote the lyric on the number 8 bus home from Oxford Street that night. It was a sunny day and I was going through central London so there are references in there to church bells, kings and other London-type stuff. Including, of course, the eastern girls, who were art students I saw coming out of Central St. Martin’s college. My girlfriend is part Cantonese-Hawaiian, too, which is where the more personal side comes into it. It’s a grand, lush, declarative love song, and a London song to boot, with a galloping second verse that always seems to get people moving. I don’t know if I’d write such a florid lyric again, but I can see why people enjoy the song.

Kind of like an old ‘50s space-soul-pop song, re-imagined by some guys with really loud guitars and an omnichord. That was the intention anyway – although I miss the original version a bit, which had a less conventional structure and was musically more intense. The words were written shortly after the death of someone close to me, it’s a bit more symbolic than some of the other lyrics. Hopefully the sense of loss still comes through, though. I get pretty emotional when we play this live, it’s an important song for me I guess.