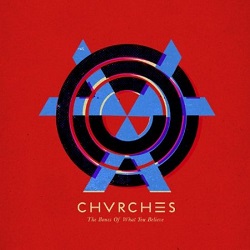 Martin: ´The Mother We Share´ is probably the song we chopped and changed and revised the most on the album – in the actual way it is dressed not the poems of the song. The chords and melodies always remained but we tried different ways of producing it – some faster tempo, some still tempo. We had different production ideas so it cost us the most effort to get everything right at the end.

Lauren: And the song was probably one of the earliest ones we wrote.

Lauren: Martin and I were discussing who is going to sing in it for a long time. First it was him then it was me and then it was him again but eventually we settled on a lady vocal. I like the fact that it has a strange opening and the production is just…really strange.

Martin: Gun is the most R´n´B influenced song on the record. The actual melodic structure of the melodic content is to me deeply R´n´B influenced. As we are huge R´n´B fans. At least I am…and Lauren is listening to a lot of R´n´B stuff as well. We didn´t plan that R´n´B influence but ´Gun´ just came out like that. It happened naturally and that is the only way it can possibly work.

Lauren: The emphasis on the vocals is quite R´n´B influenced, that´s right.

Lauren: This is one of my favorite ones and it was also one of the first ones we wrote but then we left it for a while and we came back to it towards the end of making the album. It was a song that was always on the back of our minds but we knew that we still need to spend a bit more time on it that all the ideas become realized. I think it came out really well and the guys worked hard on the mix. For me it has kind of a ´Twin Peaks´ kind of feel. Or at least ´Twin Peaks´ come to my mind when I listen to ´Tether´.

Martin: Seriously? I don´t know about the `Twin Peaks´ thing but I really like that song because it is one of the more mirrored tracks on the album. First there never comes a back punch. It just goes all the way to the very bottom – just vocals – and just when you think it´s over there is a massive punch and that´s always fun.

Lauren: And it´s one of Ian´s guitar jam songs.

Lauren: I guess ´Lies´ is a very special song for us because this is the first song anybody ever heard of us. We put the demo on´ Neongold´ in May 2012 and that was the first ´Chvrches´ song the people ever heard. So I think it has a special place in our heart. And I wanted to say that the lyrics are not all about fucking. People always think that the song is just about sex but it´s not. But anyway this is the good thing about lyrics – the people can read into them whatever they want to but this one is not about sex at all.

Martin: This is probably the most dancy production on the record. It´s got the most classic dance style production. It´s based on just two chords. The whole song came out of one idea – one keyboard idea – just bells and bells and bells but at the same time it´s got a four on the floor thing going on. It´s a lot of fun playing it live.

Lauren: It´s definitely one of the dancier songs but I think that works really well with the lyrics here.

Lauren: This is the song most people know because it´s the single I guess.

Martin: It´s nice when people respond to your music and ´Recover´ gets a pretty good reaction. But part of the reason for that is that ´Recover´ is one of the only songs the people have heard before seeing us live. It´s an unusual position to play to so many people when your album isn´t out yet. The people are great and respond positively to all the songs we play but it´s normal that when the song you´re most familiar with comes on and you´re opening up a bit more. My favorite thing about ´Recover´ is that it has two choruses. I just like songs with two choruses. Why having one chorus when you can have two?

Lauren: I know that this is Ian´s favorite song. I think he likes it that much because there is a guitar solo. And he always likes the choruses which got more of a dance element to them.

Martin: It´s the only song that got a full live drums track on the album what I think is pretty cool. Live drums are not something we want to make a habit of using but while making the song, the more and more we heard it, the more we thought live drums would make `Night Sky´ a lot bigger. We have like a three way creative partnership. We can question every decision. We all have our individual idea of what is tasteful or tasteless but we always find a conclusion that makes everybody happy.

Lauren: Everybody mostly writes the part he is responsible for. Ian writes his guitar parts because I am not as good in guitars as he is and I am writing the lyrics and vocals. So everybody brings their strength to the table and that´s what makes it whole.

Martin: That´s another one of the dancier songs. It´s always a lot of fun playing that one live.
When you´re writing a song there´s often this first spark of an idea you have. But this first spark doesn´t necessarily stay with the song till it is finished but in ´Science and Visions´ this first spark definitely remained.

Lauren: This one I think came out really well with the mix and stuff. I think it is one of my favorite ones because on the surface it seems to be one of the shortest poppiest sounding one in the bunch but production wise it is one of the most aggressive and extreme songs on the record. The base guitar is really heavy and really distorted and lyricly it´s one of the more uncomfortable ones.

Martin: That base guitar is so good. Just when you settled on this nice melody, nice production, nice song it suddenly slaps you in the face.

Martin: This is an interesting one. It´s the very last song we wrote for the album. I like the song because it feels like we were at the point we relied on and trusted each other the most creatively and it came out just after a few days. You know it just took a few sessions in the studio and the song was there. I mean it took a bit to finalize things but…. We had this period of time after we finished the album and we wanted to do nothing for three weeks except being in the studio without any pressure, if anything comes up it´s great if not we still have the album done. And there it was that song. I think I like it that much because it was the last thing we did and there was no pressure at all making it, just fun.

Lauren: I think it´s my favorite song on the record. Probably because I think it sums up the zone of the band quite well. And also this is the song I´m most proud of the lyrics.

YOU CAUGHT THE LIGHT

Martin: It´s the slowest song on the album and it came out really quickly and natural as well. We were discussing about that for a long time. Ian had a lot of opinions how the album should be sequenced.

Lauren: I think to me it is the perfect closing song because it leaves the record complete but also open ended – the last song on a first album but leading to a second one.
We were thinking as the album as a whole but also as a vinyl and when we were sequencing the album we were thinking to sequence it with trying to put one of Martin´s lead songs at the end of the first side and also at the end of the second site. We really like the symmetry and balance of that.

Lauren: We don´t want to be one of those bands who just cares about the singles and not the album as a whole. I know that a lot of people just listen to single songs but there are also people who want to listen to the album as a whole and for those people we wanted to make a properly sequenced album. It’s the same thing when you are playing gigs – you want it to flow properly within the playlist and the set so we thought about it for a long time. And also in the different formats – the digital one, the deluxe one, the CD version, the vinyl version, so that´s why it turned out the way it finally is with ´Under The Tide` as final track.

Martin: And do you know what is the best thing about being in this band? That nobody is after personal glory. There´s no ego in this band. It´s just loose discussions and even the most heated ones have only the quality of the album at the back of their minds. Nobody is making any decisions based on personal ego.

Lauren: That´s another good reason for the shared songwriting. Nobody has ´his´ or ´her´ songs. This would be where I think ego problems start. But we write everything as a group so we don´t have any problems.

Martin: I can´t wait to get back to the studio and write something actually.

Lauren: We are touring quite a lot this year because the album will be released but we have a couple of things we started working on already for the next EP or album or whatever. And writing is very important to us so I don´t think we will stop doing it even if we are on tour.

ABOUT THE ALBUM COVER
Martin: The concept is designed by a graphic designer from Australia called Amie Burrows. She came up with the idea of the cohesive art campaign. We had different shapes and different colours on the covers of the singles and if you put them all together the album cover comes out. That was kind of important to us because there is something static in it. We were talking to Amy and discussed with her a lot. She actually did all the hard work but everytime she was showing us something we were like: “This is amazing – perfect.” She´s really talented.