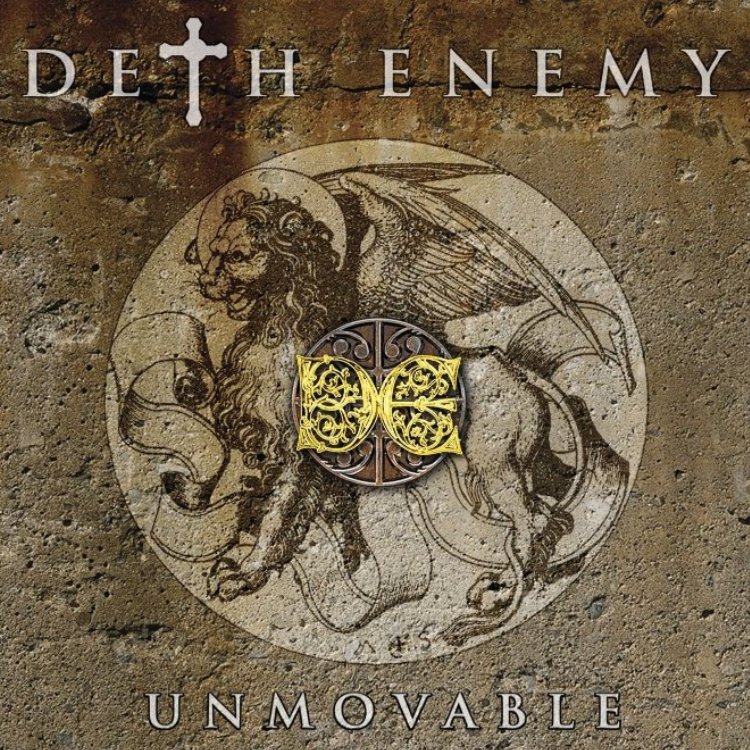 The cover was designed by Hugh Gilmour in UK. Had a good chat about what Deth Enemy is about. We gave him a listen to some tracks to grasp the vibe and were expecting a long winding process but it was  love at first sight.

That was the second track written and was originally named „777“.We jammed the tune in our garage and recorded the basic demo but the audio mysteriously disappeared and after endless drama we shelved it. After the recording of 11 tracks, we were on tour in UK and were two songs short to play a full gig so we unearthed the track with new lyrics and melody and renamed it „C.O.D“. It was a twist of fate that it eventually became side A of our first single.

This track came about instantaneously within the first minute of jamming. The whole track was created while Queensland was experiencing one of the worst floods in Australian history. We recorded all the multi tracks while our studio and house was surrounded by water which added to the epic vibe of the song.

This track come really close to not existing thanks to a huge spider sitting on studio desk. It was that big, nobody entertained the thought of getting close and personal with it. We eventually catapulted it out the door and were able to jam and „Wicked World“ was created. It was one of the tracks that was effortless to write. In fact the whole arrangement was created  on the spot and in 30 minutes. We knew our producer Tom E Morrison was gonna have fun with this one – and he did! We never got the opportunity to thank the spider.

WHEN AN ANGEL FALLS

This was the 13th track and was created in UK alongside C.O.D. It ended up Side B of first single. The inspiration behind the lyrics is dedicated to our baby cousin who passed away. She was nine days old.  Straight to the heart this one with the battle and pain one has to endure when a child is lost and how it challenges your faith and in humanity itself to find the answer to the ultimate question: Why ?

DARK SIDE OF THE BLUES

The original version of this track was twice as heavy. When we received the produced track from Tom in London we were a bit shocked at first with the added keyboards. It grew on us very quickly Coz it gave it the touch of light it needed and ended as one of our favourite tracks on the album. The lyrics focus on the hard times and getting through the storm stronger and happier than ever before.

I remember reading the newspaper which I rarely do and reading endless horror stories that are happening in the world we live in and how easy it is for some people to lie and hide the truth and do evil things without a conscience.  We had a jam shortly after and our thoughts  and feelings rubbed off onto this track. The jam  started heavy and ended heavy with a bluesy edge to it.

This track was the first track written and the birth of Deth Enemy. Frankie had phoned me that morning and we got together at his home for a family barbecue. Frankie mentioned he’d purchased a new drum kit and to bring my guitar just in case we felt like jamming. It was inevitable we would and eventually drifted into his den and it was like first beat and first riff. Everything fell into place like it was meant to happen and the bones of song was created in 20 minutes. The lyrics are about three warriors fighting the good fight against all evil and defeating the beast.

This track started off as a song named „Holy Rider“ and it kinda went nowhere really until our producer Tom E Morrison caught a hook which was in the bridge before the chorus „Welcome to the devils Playground “ and encouraged me to write a new song revolving around that melody and lyric. The inspiration behind the lyrics were the London riots. This track emphasises the true chemistry between Deth Enemy and Tom E Morrison.

I BELIEVE IN ANGELS

This song is dedicated to my little girl, first child, and how it completely changed my life and perspective on everything. It took me to a place that I thought never existed , heaven on earth. This moment changed my life forever and gave me the inspiration to pick up my guitar , write songs and record an Album. The track also features  amazing backing vocals from Rachel Morrison.

I was watching  Rodger Federer in the Australian open tennis  final on TV  when he created history and it inspired me to head to the studio at like 2am. I was playing around with different stuff and „Eternally Blessed“ was created. The lyrics are based around faith and truly believing in yourself through the good and bad times, never giving up on your dreams.

I was driving to work one morning before dawn and it was so peaceful driving. When I left three hours later in daylight it was  like „Welcome to the real world“. Cars were cutting each other off like there was only a few minutes left in the world. „Ordinary People“ was written on the same day.

This is the heaviest track on the album and even heavier played live. I was playing around quietly and stumbled apon the intro which had that old ancient vibe about it. The only way it could go from that point was either heavy or stinkin heavy. We chose Stinkin heavy. It has an unexpected twist in the middle. Very powerful track – both musically and lyrically.

This Song is about unconditional love of the purest form without judgement. I was puting my seven year old daughter to sleep and playing an accoustic guitar in the dark – kida evolved from when she finally got to sleep to the studio thereafter. As I was finishing the track the sun was rising and a strong ray of light shone through the studio window. Made the hairs on the back of my neck stand up. Very cool!