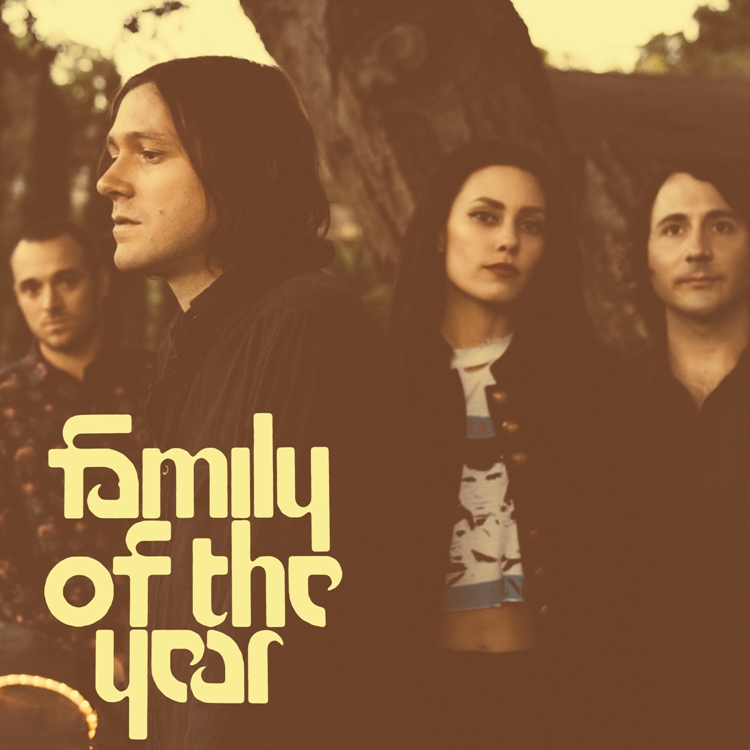 We recorded that album in Berlin. Most of the impact the city had on the record was the studio we were in versus the city because we were actually working most of the time we were here, so we didn’t get to party or do anything. It was more the equipment and the vibe in the studio, so it could have been anywhere. It became like a very special bubble because it was far away from home. At times this new record is more aggressive and then it’s more intimate and emotional at other times. This is like a slightly more powerful album. Whether people like the new songs more or not, we think we become a better band.

Sebastian: It’s the summer track! It was written in the wintertime. Joe wrote it.

Christina: Most of our songs like the happy songs usually come from places of darkness or opposition because it’s kind of hard to write a happy song when you’re happy. If we’re happy, we just go out and do things and we don’t wanna write songs about how happy we are.

Sebastian: And if you’re too happy, it’s sometimes good to write a sad song. So this one came together on a snowy day in winter when Joe was home for Christmas and he was thinking about the summer.

Sebastian: That one was inspired by a group of friends that we had a few years ago in Los Angeles. They were adopters of the festival style, the hippie kind of vibe, that modern kind of style that kids in California have: like wearing rags, adopting animals and walking around in town together like smoking.

Christina: Yet Mom and Dad pay the rent.

Sebastian: And then they have a new car. This is like a funny thing going on. Maybe that song is actually most influenced by Berlin because our producer, who’s little older than us, was always fascinated by the early Berlin dance scene. So when he came here, he was very excited about that and when we were jamming in our studio, he had this jumpy bass line over that. A little bit of that got into the very end of the song.

Christina: “Carry Me” is one of my favorites to play live. I was hoping I would have less to play when we sing it, but unfortunately I’m busy and stuck to my keyboard. The lyrics are repetitive at the end, so it’s easy for the crowd to get into it.

Sebastian: It’s a really fun song. We hope it’s kind of an anthem. We want the music to be anthemic but we don’t want to be annoying because some bands try to go for the anthems too many too often.

Sebastian: One of my favorites on the album! I love the sentiment of it, I love the “we got each other” kind of attitude it’s got. It’s encouraging. I didn’t write it, so I feel like it’s as much for me as it is for the audience. What I’m playing on the drums is really fun, so I love it.

MAY I MISS YOU

Sebastian: I don’t know how autobiographical it is, but to me the idea of leaving people and things behind and just hoping that it’s okay with yourself and with them and this explanation for why this has to be is very powerful. And musically it’s one of our best songs. Joe’s guitar playing on it is amazing. I think it really goes places. It’s really 70s kind of rock.

Christina: That one is one of my favorites. Usually when Joe and me work on a song, he tells me what to sing, but for this one I worked on the harmonies on my own. Therefore it’s the easiest song for me. The harmonies are in my range. I’m not like a very strong singer, so coming up with the parts on my own was kind of exiting for me.

Sebastian: We start our set with this one now. We feel like it’s a good opening song that tells a lot about where we are right now as a band. I feel like it’s almost the emotional anchor of the album.

Sebastian: This was written for a love of one of ours. It was written for her. We had a lot of fun getting some of those sounds in the studio. It’s a very acoustic guitar driven song. We actually had our touring crew with us in the studio and we basically picked up every guitar. Seven People sat around the microphones and played. I was the only person not playing a guitar because I  was filming it. That was fun because everyone knew who that girl was.

Christina: It’s secretly about someone one of us knows.

Sebastian: His or her life has taken a tumble. It’s written for someone that needs help and I think it’s just the best way that we can reach that person. And it’s one of the older songs on the album. Parts of it were written like four or five years ago.

Christina: I wanted to sing on something where I don’t have to sing again like in the high register that girl normally can sing, so that was a fun one to do.

Sebastian: The demo of it sounded so different and interesting we couldn’t resist doing it. When we were done recording, it just worked and turned out right. I’s definitely one of the more different songs we recorded.

Christina: Another one of the more personal songs about someone one of us knows. (laughs)

Sebastian: But I think it could be for anybody and anyone of the members of the band at any point in over the last few years. For that reason we all have a very deep connection to it. Joe feels like it’s the most emotionally intimate song. It’s really good in my opinion. I feel weird saying that. Is that weird to say?

Christina: Not if you didn’t write it. You’re just a fan!

Sebastian: Damn right! I’m just a fan in love. Thank you guys for letting me play on this!