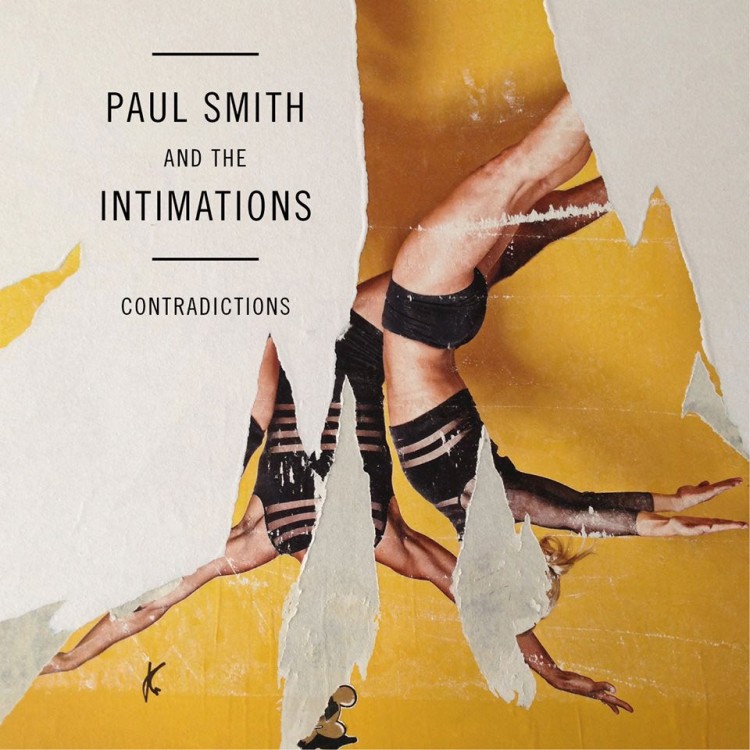 Over the last four years I’ve been traveling from New Castle to Manchester where my friend, drummer and co-producer lives. He’s got a studio so we could have it for free at the weekend or on evenings. After we got the basic tracks we just did it in our homes. I’ve got Wendy Smith from Prefab Sprout on some songs. She just came to my house and sang and I was amazed that you can do that. I know that you can, but I’ve been a lot in studios and it’s just really nice to have that homemade feel. Maximo Park always had kind of unspoken rules like we did not want any guitar solos to get to the point. I am making my own decisions and it’s nice to have that kind of freedom to explore. I’m sure everyone else in the band feels like that when they are doing other things.

Five years ago I was on tour with what are now called The Intimations – my friends Andy and Claire. During that tour we were messing around with musical ideas. Claire was playing the bass line and I was playing the guitar, which is pretty much how you hear it on the record. This song was a kind of a sonically template for the rest of the record. It has a driving rhythm, but yet there’s dreaminess and the vocals are very soft. It’s about being brave. I can’t swim very well. I was in San Diego and that’s kind of where the song comes about. The water is warm and I’m not used to that living in New Castle where nothing ever more than paddling has happened. Then I was actually in the ocean up to my waist. I suppose it’s a new step each time you make a new record and you throw yourself a little bit into the deep to see whether you can swim or not.

This is the pop song on the record. Quite a lot of the songs are catchy and have simple rock ‘n’ roll structures, but this one is the straightest of them all. It’s a summer song for me. It’s basically about me and someone who’s a bit older and not necessarily doing the right thing and then realising when you get to that age how that person felt. You look back and you think: “Maybe I could have done things differently!”. It’s a very romantic song about meeting somebody and going for a drink and your defenses come down. I really love simple rock ‘n’ roll music like Buddy Holly and this felt like that to me.

I’ve had that title in my notebook forever and I didn’t know what to do with it. I thought maybe Maximo Park might be able to use it at some point, but it never came up. Claire wrote the bass line. I added the refrain and all of a sudden it was weird, but then it had that kind of insistent upbeat rhythm. I added another section towards the end and it suddenly felt like a song. The lyrics came a bit later. I was thinking about what I can write to go with this title. I had lots of stuff in my notebook that was kind of about somebody who was quite withdrawn and at home. Then I created this character. It’s kind of like a song about coming back from loss.

BEFORE THE PERSPIRATION FALLS

This is a very simple song. I wanted something that was between Nirvana and The Pretenders – something that just has got a snappy catchiness but also that heavy side of things. It’s almost like a working class pop song. I’ve done a few crab jobs like working in a call center. I was on a help line so people would shout at you and you try to fix it while the computer doesn’t the work and the boss is going crazy. It’s like being in a factory without physical facts – it’s more mental. I remember thinking I can’t do this forever, but you know you need the money at the end of the week. The verse is more about dealing with things and having somebody to help you.

It’s about the town I grew up in. There is a big chemical factory and everybody knows somebody who works there. Now it’s changing because this industry is dying out, so that’s probably not the case anymore, but my grandparents worked there and my father still does. This song is about my granddad who used to take me down to the transporter bridge and we would have an ice cream. He died when I was young and I asked my grandfather “What was granddad like essentially?” and she was like “He was no trouble!”. I know that he liked putting bets on things and I tried to do a picture of him in the song. It sort of speaks to that history that is shared in that town.

I SHOULD NEVER KNOW

This is my shoegazy moment on the record. I like stuff that’s a bit more airy and atmospheric. It reminded me a little bit of a band I loved when I grew up called The Sundays. They were kind of a poppier Cocteau Twins. I wanted to write a song where I wasn’t as focused as I usually am. There was a phrase in my head when I started writing: “I should never know, I could never know”. I was like “Well, why change it?”. When I started to think about the rest of the song, I tried to write about moments where you’re about to embark on something. You just met somebody at a party, you don’t know where it’s gonna go.

This is an interlude. Just a little moment to have a think. I had this little bit of music that was kind of very similar as “Before the Perspiration Falls” and “Fill In The Blanks”. I thought I can’t make a whole song out of this because there were some very similar riffs, so I thought I just keep it as an interlude.

FILL IN THE BLANKS

This is a song about a point in relationship where this silence between you and the other person could go in either way: It could be the silence of two people who are very comfortable with each other and don’t need to talk all the time, or it could be silence because you’re not really getting on. It’s up to the listener. You can never get inside someone else’s head. It’s quite a romantic song and the center piece of the record because it’s very long and there are a lot of guitar solos where I just mess around, so I enjoy listening to this one.

This one refers to the old German silent film “People On Sunday” from 1930, directed by Robert Siodmak in Berlin. It’s pretty obscure and classy. The Weimarer Republik is still in swing and it’s kind of an innocent time before all goes wrong. The film is two couples go to the lake and have a good time with a little record player, but when it’s over it’s the end of the weekend and you have go back to work. Things go on but for this time there’s something idyllic. With the music I wanted to match that. It’s my song for Berlin.

I did a little video for this with the lyrics because I wanted people to concentrate on them. It’s describing these photographs that I saw by Robert Frank. In 1958 he did some photographs of Coney Island on 4th of July after the party. There’s something melancholic about it which I wanted to get into the lyrics, but also a celebration has just happened. It’s kind of about the feeling that the American Dream has another side to it where people have to sleep at the beach because they don’t have any home. I wanted to have upbeat drums, very 80s, but then the lyrics are a bit more complicated.

This one is about domesticity. It’s about being at home with somebody. There’s this line which says “Don’t hesitate, domesticate!” which is like an advertising slogan. I think is just about being comfortable with somebody and getting ready to go out. This person is in the shower and you’re looking out of the window on the mezzanine floor in the middle of the house and you can see the light out of the bathroom. You are just looking at it and thinking about where you live and the chaos on the road that you live on. I wanted it to be hard rocking but soft and dreamy as well.

This is a tender song. A song about remembering the moment you met somebody and feeling that excitement and then being in a relationship with them and thinking “Why don’t I look at you more often?”. We get on with our daily business and sometimes you don’t take the time to appreciate the other person. This is a song about wanting to do that. You can never get enough of somebody sometimes.

Because the last song is so soppy and sentimental I wanted to leave everybody on a high. This song is very catchy and silly. It’s influenced by a band called Felt from the 80s. I love the guy’s vocals. He doesn’t seem to care but also it’s quite funny. I think it’s about people judging you. It’s kind of me making fun of me as well. There are no new ideas. I’m just regurgitating history, but in my own way. Sometimes I think to myself: “What am I doing?”. But then I also think: “If people like it, what more do you want from life?”. It’s a good way to finish the album I think.