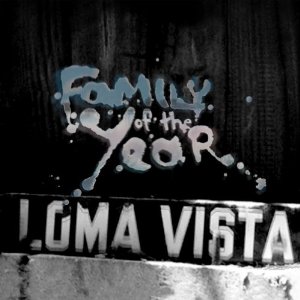 Christina wrote the lyrics on this one – we were just hanging out and started playing some chords along with it. (Joseph)

It’s kind of about a time in our lives where everything seemed to be changing for some reason. We were working on the next record but we were unsure what was going to happen with our band, if anyone was going to care about the next record. We were all living together and we were partying a lot and our neighbor wrote very passive aggressive letters to us and left them on our door. We’re not sure who named the track, but the place that this all happened was up on a hill above like 200 stairs. (Christina)

We were all kind of broke and living together. Things were difficult, there had been a lot of ups and downs, members had come and gone and the industry is just so fickle. So that song is about not letting bad luck get to you and being positive. (Joseph)

This is a fictional song that we wrote about James. (Christina)

When I was younger I lived on an Island in the Caribbean for a few years because my Dad was stationed there. We were on tour in New York and a friend of mine invited me down there with a bunch of other friends and at the time I was going through a pretty bad break up, so I decided to have a vacation for myself. So the song is kind of autobiographical to an extent. (James)

We were basically making a song up about James’ vacation and what we thought it was going to be like. So maybe he was drinking a daiquiri, listening to Island music – I just pictured him walking out into the waves and shouting, “Why??” Laughs (Joseph)

This is really simple. It’s about a list of stuff that you would bury with you, like the Egyptians, so it’s kind of a play on that. Although the things we list are completely ridiculous, like the modern day things that you wouldn’t want to live without. Or if you were going to hell and you could only take ten things. (Joseph)

This one is very personal so I can’t really elaborate too much on it. (Joseph)

I remember when we were working with the producer he suggested we make it Reggae, but it didn’t really work! Laughs (Christina)

So I just picked up the acoustic guitar and I played it. (Joseph)

It’s about us all being together and what we were doing in the moment. (Joseph)

We didn’t have any money…(Christina)

We were just living on love and libations. You can’t always get everything you want but there wasn’t much we needed so we knew we had friends, we had each other and we had some booze, so let’s just do it! (Joseph)

In terms of the music I was listening to a lot of metal at the time. (James)

Yeah James rocked it up! (Joseph)

That’s the slowest song on the record, a real ballad and it’s a pretty personal song because I was feeling really homesick when I wrote it, so it came out really honest. It’s a little bit different also because I played piano on it, I think it’s a really pretty song. We did a kind of 70s sound for it with the production, like Elton John, a kind of slap back drum sound and some good harmonies. I like it. (Joseph)

I cried the first time I heard it. (James)

I cried when I wrote it. And there’s a double entendre behind the title, MA is the initial of the state that I lived and where my Mom lives too. (Joseph)

We wrote this after we had the whole record already figured out and me and Jo came up with this other song and the producer liked it. Actually in the demo there were children screaming, “Yay!” Laughs That was cool, I don’t know why it didn’t make it onto the record! (Christina)

And Chrissy was kind of going through some stuff and I was trying to be supportive of her, but I don’t know where the title came from? (Joseph)

Because we said, “In the end, I’m your friend.” (Christina)

No matter all said and done, no matter what. (Joseph)

This was probably the most rockin’ song, and we had to fight to get it on the album as it wasn’t the producer’s favourite. (Joseph)

I think he saw us play it live and changed his mind. (Christina)

That is musically a pretty simple song and I like to sing it. It’s hard to play live though because the singing is kind of complex, but the instruments are easy. I wrote it about the feeling of longing, like when you are a kid and you look out your window and you are wondering what it is like out in the world and what it will be like when you can finally go out there. It’s a beautiful thing to have that feeling and once you have the chance to go out there you just want to go back and you think, “Why did I leave?” and you just want to be in your Mom’s arms! Laughs (Joseph)

True story about going to a party with these guys…(Joseph)

And I left him there…(Christina)

I turned around and everybody had gone! So I spent the rest of the night trying to get a ride home with some strangers and I finally did get a ride home and they got lost, so by the time I got home the sun was coming up and it was 6am! I was miserable and pissed off about it! Laughs (Joseph)

She Wants to Talk

This is my favourite. The title has nothing to do with the song – it comes from a part of the song that ended up being cut that my brother had written, but it didn’t fit the mood. But we ended up keeping the title. And musically I love it, I think it’s really pretty with the chord changes and the arrangement. I think it was a little too mellow for the American release but I love it. It was the first song we recorded and finished on the record, it’s about loving something very, very intensely. (Joseph)