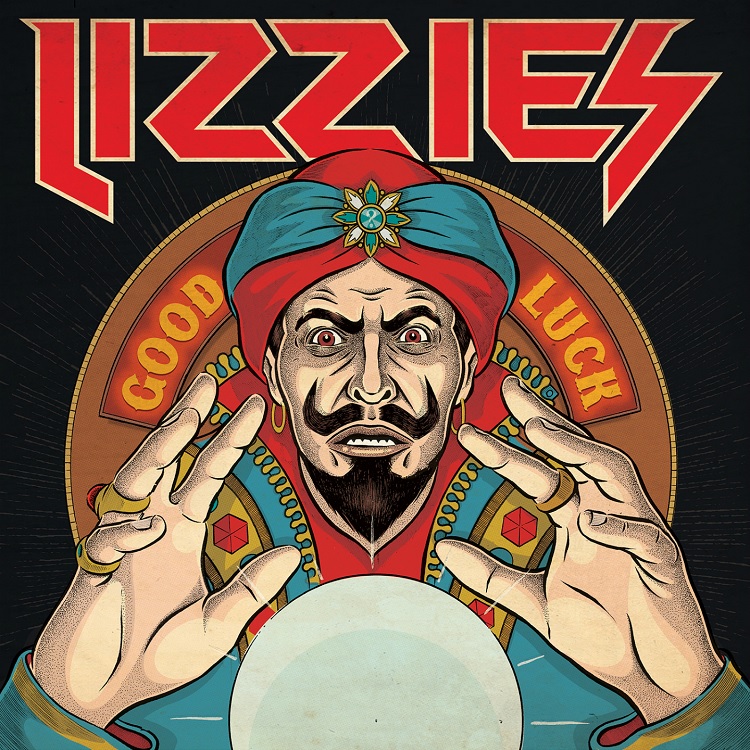 Good Luck is a whole story about chance, daring and life experiences, it’s like a road trip. As we were finishing the songwriting process we realized most of them talked – in some way- about gambling, fortune, luck… so we thought the most fitting name for our first record would be Good Luck. Also because in the end this is some kind of bet: our sweat, blood and tears on nine timeless songs, written with all our passion. For the album cover artwork we imagined some kind of a creepy trade show with that fortune-teller called Zoltar in the movie Big (1988) and he inspired us so much!

Phoenix means a new beginning. It doesn’t mean that we’ve hit rock bottom, but we’ve felt a bit dejected when we couldn’t play as much as we wanted to, or because it was taking time to finally have a full album out. We’re also tired of destructive criticism and we think the best way to answer is with music. Rock n Roll is made to say ‘Fuck you!’ somehow, so that’s what we did in this song. It’s a statement: “hey, we’re back and stronger than ever!”

This one is about running away from your everyday life, because people sometimes get trapped in boring routines and forget they’re only gonna live once. It’s about people doing whatever the fuck they want if that’s gonna make them happy. It’s about being tired of societies that teach you to live by the standard rules. So take a ride and run away with us!!!

Viper is about toxic people. We all have dealt at least with one of them. Those who always are the victims and who only see things from their point of view; any other option is just out of their logic, so in the end you don’t know if you’re getting mentally ill or what, but what is actually stupefying you is their poison and their manipulation. After some time you realise there was nothing wrong with you, and that you’ve been “bound with ball and chain.” And then you decide you don’t want to be any longer “under the spell of a silent lethal snake”, so you kick them out of your life and, of course, head out to the highway and “speed away” hahaha!

This a long and strange story and it could seem a joke, but we’re telling the truth, we swear! Patricia (guitars) dreamt she wrote this song (it was way crazier, it had trumpets too! Hahaha) and showed it to Elena (vocals) and Marina (bass) while they were eating huge slices of pizza. But when she woke up the only thing she was able to remember was the melody of the chorus “Night in Tokyo, Nigh in Tokyo…” She recorded it immediately and wrote a new song from that weird dream. So for the lyrics we thought we could talk about all the crazy stuff we dream from time to time, that’s why they are kind of non-sense, cause they are dreams!

SPEED ON THE ROAD

Speed on the Road has been with us for many years. We decided to re-record it because we love its vibes and rhythm. It’s about the nice part of having a band, the different stops of a tour, the parties, the ice cold beer kegs… this song means freedom and enjoying life at its best!

One Night Woman is about a woman whose life hasn’t been easy. She’s been mistreated and has ended up working as a prostitute. She tries to change her life but can’t, cause she hasn’t learnt nothing else but the “rules of living in the streets”. At least there she can make others play by her rules, “if you play right she’ll make you glad, she’ll cut your balls if you’re a scum!”. It’s a fist in the face.

Russian Roulette deals with some sort of gambling, but not in the sense of making money or something like that. It’s the game you play with a revolver and a single bullet in it. It’s a bit of a metaphor, because sometimes life can be a Russian roulette and you don’t know if you’re gonna have good luck and survive this time or you’re gonna end up stone dead. It’s about daring, about having guts and going for something… no guts, no glory!

The Magic 8 Ball is an old toy used for fortune-telling, but here is a metaphor for making your own decisions and taking over destiny. One could take this song as the final episode of a road-trip. Imagine waking up in a car in the middle of the desert, thinking about the past and all your sins you left behind. It’s time to choose a new destination, ask the 8 Ball. But “if I don’t like what the 8 Ball says, I have to shake it once again”, that means you have to choose your destiny yourself. Once you’re ready, start driving again. It’s already dark, and the city lights of your next stop are in the horizon, waiting for you. Good luck. It’s some kind of catharsis, you close an episode and the road leads you to a new place.