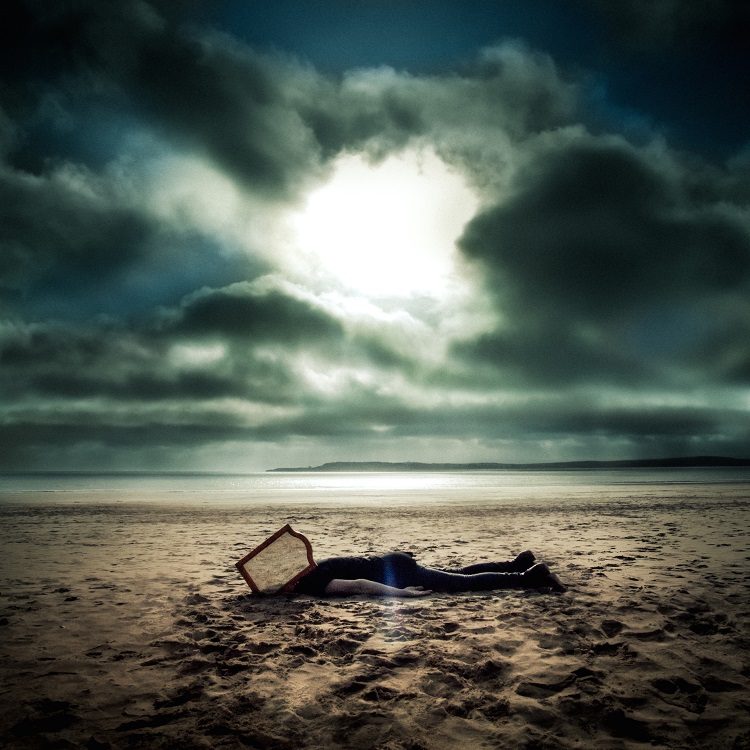 I NEVER GOT TO SAY GOODBYE

The climax to this song started as a section of another song entirely. We knew that the climax was connecting emotionally with us, we just had to figure out how to get there. We picked out the chords and Tom just happened to have the synth sound you hear at the beginning, running in the studio. The chords sounded really beautiful played with this sound and slowed right down.

We decided to make the song all about suspense. About the journey to this incredible climax. Lyrically, it is a journey of a girl and a boy with a tangled history, who travel and eventually meet at the shore. They stand hand in hand and wait for the tide to come in and when it hits, „hold their breath for all time“.

The beach on the front cover is the beach Tom had in mind when he wrote this song, so we were delighted when we found out we could shoot at this location. For Tom, the character on the floor represents the Ruiner who is a recurring protagonist throughout the album. He’s been washed up on the shore and the mirror is a reflection of his past. „If you want to change the world, turn around, but take a look in the mirror“… Sorry, wrong album!

This was the last track written for the album. After many melancholic months in our toxic bubble, Chainsaw was screaming out to be written. We wanted something, high energy, furious, bitter and enraged. Something to get your teeth into. A song, foaming at the mouth. An opportunity to face the demons and fight them. Chainsaw is the incensed phase of realisation. It’s that feeling of wanting to self destruct, but not alone, with someone who you know you can trust to make sure as much damage can be done as possible. An antagonist and a facilitator, someone who knows exactly how to push your buttons. „Two can play, two comply, two can use. You poison me and I poison you“.

THIS IS A WAR

This one began as a solo effort from Paul who began singing the melody over a looped beat in a writing session back in our London studio before we moved to Berlin. It instantly hit us as being something special, so it was one of the first tracks we developed when we arrived in Berlin. It’s quite a beast of a track and took a lot of grappling, being one of the last tracks on the album to be put to bed. Some tracks come together in a day. Others need more work. This one needed a lot of taming. A great example of how perseverance in the studio can lead to something great.

The first track we wrote after arriving in Berlin. On arrival we were welcomed with an array of new toys to play with and almost before unpacking, Paul and drummer Dean embarked on some mad vintage synth jam before Tom even had time to set up the studio. Paul played Tom his phone recording of Dean’s synth baseline and Tom’s eyes just lit up. Dean was quick to lay the drums down after putting down the bass and his „speeding up“ hi-hat part was something we had never heard a drummer do before. Lyrically, as with a lot of the album, the song reflects on the ramblings of a miserable failure of a human being. A Ruiner. Someone who has lost everything and has been banished to a desert island waiting for a boat that never comes. Someone so poisonous he only needs to step into a room to cause damage.

This one began as a balls to the wall jam in our old studio with the bass drone you hear now and the drums turned up to 11. It was a bone shaker and hopefully it has stayed that way! It was a jam that insisted we move any breakables from shelves and work surfaces in the room. Dean our drummer is an incredibly creative drummer and is always coming up with ways to throw the rest of us off the scent. He kept changing the emphasis of where the start of the bar was while we jammed and this became a recurring theme in the song. The lyrics were inspired by an actual car crash which took place one morning outside the studio. And the top line melody? Paul must have eaten something funny, or hit his head because after he splurged out the verses Tom was so confused he knew it was a keeper.

This song arrived in Berlin as an instrumental piano piece that Tom had written the previous year. Tom had big plans to develop it into an entire band piece which we did, over the course of a year. It had big drums, dirty bass , ripping guitars and heavy industrial sounds which were all really powerful but unfortunately it never quite connected with us emotionally. It was all there, we just couldn’t get a mix of it sounding close to where it did in our heads. Sometimes, the downside of having so many layers and textures is that you must compromise the elements that are in a track and you can end up missing the crux. When Tom finally threw in the towel, Eddy reminded him how beautiful the original piano piece was and so Tom simply muted everything other than the piano, vocal and a few tracks of atmospherics. It suddenly connected with us and everything fell into place soon after.

A true story and modern fable about a rare female sociopath and a male empath. The lyrics are written from those two points of view. The first line is the sociopath, the next three lines are the empath. The last line of each verse is the sociopath, because sociopaths always have the last word. The last line changes slightly with each verse, as the sociopath has feelings she’s never had before, because people like that are chemically incapable of feeling.  The track itself was inspired from a late night listen to Someone Great by LCD Soundsystem, a song we all love from a band we all admire. Eddy sang the original guide vocal, Paul did a great job making it his own and Tom’s ears and fingers gave it one of the best crescendos on the record.

At the time this was written, Eddy was going through acute insomnia, sleeping around 8-12 hours per week. On one of his commutes from London to Berlin he wrote these words, a literal reflection of his state of mind: Therefore the word ’shit‘ appears in every line of the song. It brings into focus just how strong a word like ’shit‘ is and how it can be used in so many contexts. The main keyboard riff was Tom’s incredibly rare ‚Skywave Lord‘ analogue synthesiser. Paul or Tom kick started it, let it run and run and after a cascading drop from the top of its range to the bottom, Eddy spotted a potential riff, Tom isolated it, and began to build a great track around it.

„Like A Red Rag To A Bull“ was a sentence that went round and round in Tom’s head so much one day that he ended up recording it on his phone as a potential idea. The loop of the sentence dictated the time signature. From the off, we knew we wanted this to be ferocious, so this came together pretty quickly. This song really gives Paul the chance to tear up the speakers in his own inimitable way.

Tom’s Skywave Lord synthesiser was again the inspiration behind this track. It’s the vibe machine. It always throws out something „bat shit crazy“ as Paul puts it. Something seemingly random but in this case Paul used his sixth sense to hear (it still baffles us how he heard this) that the Skywave was in fact trying to say something to us. The loop that you hear at the start is what came out of the speakers on this particular day when we turned it on. Paul shrewdly noticed that there was a time signature to the pops that made up part of the loop. „Listen, he kept saying… 1… 1,2… 1… 1,2,3…1… 1,2… 1… 1,2,3… it’s looping like that“. At this point, Tom thought Paul had finally lost it and it was time to go to bed but sure enough he was right. This immediately inspired the rhythm section with Dean able to play the sequence without even batting an eyelid. Tom just kept recording and decided to drink through it in hope of some kind of clarity.

The lyrics are the thoughts of our Ruiner character trying to sum up everything that he believes he is. After every thing that happened, he made his bed and now he must lie in it. He chose it. The huge crescendo at the end is the complete opposite to what Guy Garvey had intended the crescendo of Starlings by Elbow to be; The representation of Love, Joy and Happiness. In our version, this is the sound of a man with eyes closed, and clenched fists, head back, screaming at the sky above. Possibly the last thing he does before he walks towards the shore.