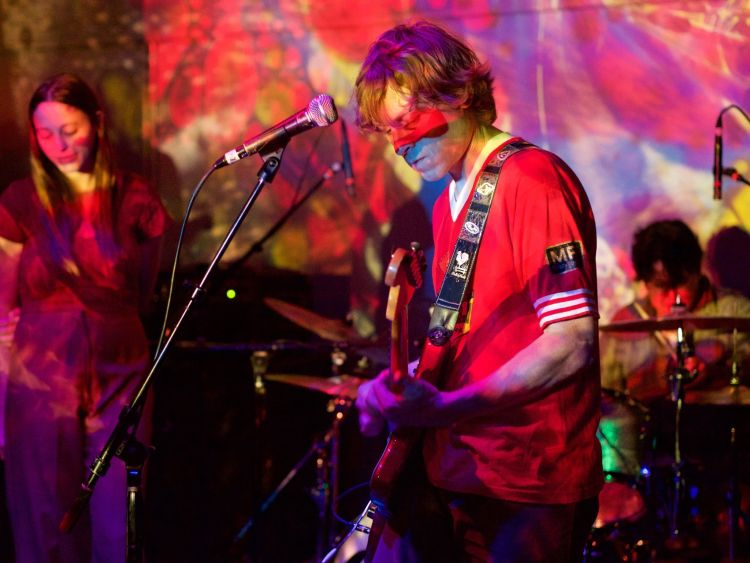 LSD AND THE SEARCH FOR GOOD (Indie/Shoegaze/Psych) released their EP „Heaven Is A Place“ in 2016 on Deep Space Recordings with new memebers Ryan Lescure and Ricky Maymi (Brian Jonestown Massacre). They’ve been perfecting their lucid live show up and down the U.S. West Coast and on tours across the U.S. and Canada, including sets at Austin Psych Fest Levitation (2013), Bathysphere (2013) with A Place To Bury Strangers, and Desert Stars Festival (2014) with The Dandy Warhols.

LSD twice toured the U.S. with legendary Creation Records band The Telescopes, with Liszt, Fifield, and Maymi doing double-duty each night, performing as members of both LSD and The Telescopes. This collaboration led to The Telescopes’ recording project in Los Angeles that resulted in two records: the acclaimed EP, Harm (Neon Sigh 2014), and a 7” single, Thrown (Genjing Records 2015).

Over the years, LSD and the Search for God’s cult-like following within the underground psych/space/shoegaze community has remained as passionate as ever, and this EP picks up where they last left off—then blasts off for parts unknown. “Heaven,” “(I Don’t Think That We Should) Take It Slow,” and “Elizabeth” showcase the band at their best—swirling, reverb-drenched guitar chords, intertwined with shimmering male/female vocals — while “Outer Space” and “Without You” slow it down a bit and throw hazy, psychedelic guitar riffs into the mix. The obvious comparison to the Creation Records sound in its heyday is appropriate, yet LSD have definitely taken that noise and made it all their own.

On the heels of releasing „Heaven Is a Place“, the trip continues. In addition to more shows across the U.S. and Canada, LSD made their European debut on a month-long tour in spring 2016, starting with the Cosmosis Festival in Manchester alongside The Jesus and Mary Chain, Wire, and The Raveonettes.

Make no mistake: LSD and the Search for God are here — now more than ever — and they’re ready to solidify their rightful place as the sonic harbingers of blissed-out rock ’n’ roll!