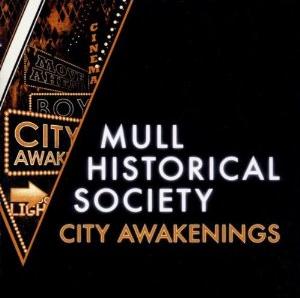 MUST YOU MAKE EYES AT ME NOW

I programmed this song quite early on the in the album writing. The timpani drums at the start felt exciting and to me like an album saying ‚I’m here!‘ The first chord then set the structure in motion, it just felt quite poppy and immediate. It’s about going it on your own, very positive and seeing the glass half full.

CAN YOU LET HER KNOW

I overheard a conversation on the London tube one night. I remember seeing this couple breaking up, making up the whole way out of the underground. I already knew the album was going to be about cities and people living their lives in them – so I went home with the line ‚Just the way that the river runs through her hair.‘ And that was it. The song was written.

This is the first single. Coming from an island (Mull, in the Hebrides) I recall being 5 years old and travelling down in the back of the car to Glasgow. I was so excited and kept asking my parents ‚is this the city?‘ every time i saw an oncoming car light. Eventually we arrived and i can still remember the flood of sounds and smells – and cars everywhere. This song is basically that memory, bottled. Being the child in the back, getting the car stereo feed, and making up my own melodies.

MUST YOU GET LOW

It was written at the same time as ‚Can You Let Her Know‘ and when i had the line ‚We Write dreams so what’s your part here?‘ i knew I was onto something – it is about looking down on a city a the multitude of subjects, and then you are only one of them, finding your own moment. The city can give you life or take it away; turn it’s back or embrace – like the people living in it. I also imagined an Orwelian force controlling the subjects, the city. But then – it’s a pop song I hope – upbeat and bright and summary!

Similarly to ‚The Lights‘ this is a childhood memory. I didn’t live in a city growing up so I made one with paper and cereal boxes etc on my bedroom floor. Sonically I like the textures in this song – I started it on my Mac and then gradually added real instruments, and it was nicely produced by Dom Morley, who Produced the album with me, and has a nice Grammy on his mantlepiece for Amy Winehouse’s ‚Back to Black‘. We had fun with that one – it comes at a stage on the album when it needs to slow down, and breathe.

YOU CAN GET BETTER

I wrote this quite quickly. It’s about anyone in pain, offering them hope. I like hope. The intro loop I created by accident and then build a song around it. The lyrics I chopped from various interviews in the Paris Review books which carry interviews with the world’s best writers. It was also written at the time of the Japanese tsunami, and song of my lyrics reflect that, the sadness of it. But then the chorus is a positive message – as is the album I hope.

THIS IS NOT MY HEART

Is had something of the above song in it. A friend told me a moving story about a fleeting connection they had with somebody and I scrawled the lyrics very quickly. It’s about people’s changing lives, looking back and thinking ‚where did I go? / where did we go?‘ It’s never too late to change and be inspired, but then this song is a it of a sad refrain. I wrote it early on in the album process and I liked the idea of this meta-physical refrain that this pain is happening in somebody else’s heart – but we cant always kid ourselves on.

I wrote this at the time of my first MHS album ‚Loss‘ and it just kept hanging around. It is very update and throwaway – steel drums, riffs and a narrative of a man representing his at some Euro Conference or Nato directive on climate change or such. Ticking boxes, straightening ties or living the living corporate dream. He has a briefcase, a wife (honey pie) and a very forceful walk – straight into the sea. Maybe he’s a commissioner on European sea fishing quotas. Something like that. It;’s just a fun sugar rush I hope!

FOR BAS, THE HAGUE

This is one of the songs that made me realise this was a MHS album again – it was written in honour of a man called Bas, that, yes, I met in The Hague. Something he said moved me and that was it. It’s about kings and queens, but not the kind that wear crowns. It’s about reliving your life and never forgetting who has gone before that meant something to you. It has timpani drums, mandolin, banjo, indian harmoniums and whatnot on it, but I also like the driving simplicity of it. I love it.

This song is about the area of London near Kind Cross station, where many Scots arrive into the centre of London. Some stay, so leave, some make their mark and song are broken. It’s about being an outsider and trying to move ahead. It is mostly instrumental and I was very proud of the programming I did on it – I made it on my laptop! And then added guitars and real drums etc. I think it is one of the best things I’ve done and it finishes the album off in an atmosphere of having been on a journey I hope. Then the London riots happened, some people burn cities too. The melody I first played ten years ago at my Dad’s funeral, my father;s passing inspired ‚Loss‘ so ten years on, this song is fitting for me to close my new MHS album.