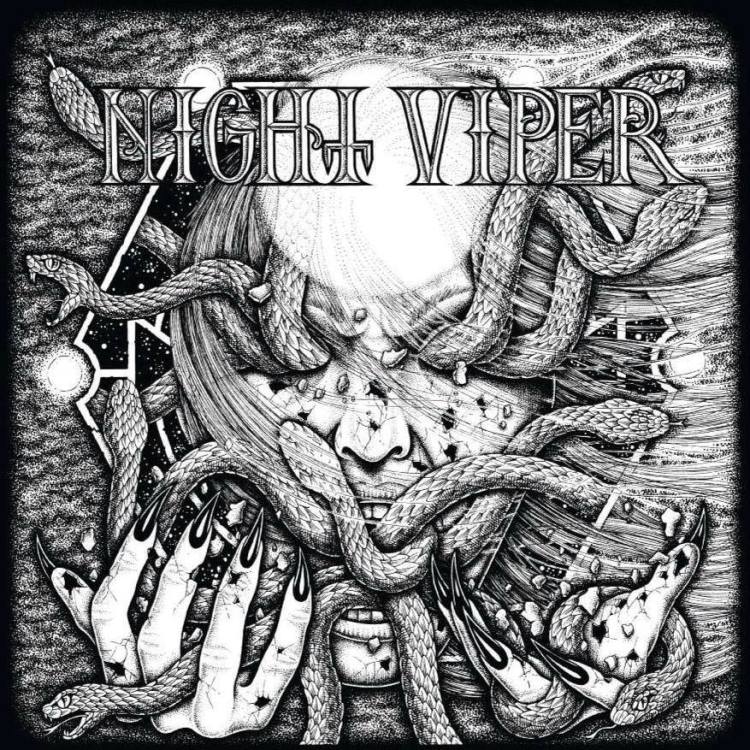 Tom: Not everyone likes songs where the band references their own name, but I kinda love it. Manowar! Born to live forevermore! We’ll never stop, we’ll never quit, ‚cos we’re Metallica! You get the picture. The main riff came to me as a kind of Entombed-type riff, but once we started doing this song as Night Viper and the guitars were tuned regularly, it came out just pure heavy metal. I love the trade-off solos. There’s no clearer illustration of the difference in style between Emil and I. My solo sounds like a motorcycle accident, and Emil’s sounds like riding a beautiful horse bareback through a sunny meadow. His solo after mine is like getting handed a big cold glass of water on a really hot day.

Tom: This also totally came from my love for Entombed. The riffs are very much inspired by their Uprising/Morning Star period, but again, we don’t tune down our guitars, so you wouldn’t necessarily notice it. We love playing this live, and I looooooove what Jonna did in the mid section with all her fills. Metal drummers can be so stiff, but she’s just wonderfully swingy. And this is one of my favourite swingy Jonna moments.

CURSE OF A THOUSAND DEATHS

Sofie Lee: This is a very special song for us. We rarely play it live, because it requires a particular atmosphere.

Tom: Yeah, true. I think we need to prepare some candles for this one for future shows. I had so much fun writing this with Sofie Lee. It was one of those sessions where we decided we needed a certain kind of part, and I was able to come up with something on the spot. And this is where you really hear Emil’s folk background. He does great things on it. It’s a long song and has tons of riffs, but they all sit together so well. And I love the story in the lyrics. It tells the story of a witch who is captured and killed by a king, and her daughter who in her grief puts a curse on the king, and his entire male line for all generations to come.

Tom: I have to admit that this song musically was totally the result of my Kill ‚em All obsession. Ha! Anyway, the riffs are pretty complicated, and I wasn’t sure if people were gonna be able to pull it off, but everyone beavered away at it, and now it’s a total favourite for all of us. And Sofie Lee did the impossible again by making a fast and thrashy song super catchy and sing along-able.

Sofie Lee: Initially this was gonna be a party song, with party themed lyrics. It turned out the angriest song on the album. The lyrics are not only a personal release over some dysfunctional relationships, but also about the frustration of being reduced to an object and a muse as a woman.

Tom: I think Sofie Lee recording the vocals for this was my favourite moment recording the album. The parts at the end when she’s all, ‚Run!! You can’t Hide!!‘ were so fun. We were all in the control room screaming and going

Sofie Lee: You could say this song’s about Fridays. It’s about losing more and more self control during the week, questioning working life.

Tom: We’ve been opening shows with this recently, and it really works. The intro is for all the Trouble fans out there. He he. But the rest of the song is that combination of heavy metal and rock ’n‘ roll that really defines us. Look for hidden messages in this one, people.

FACES IN THE MIRROR

Sofie Lee: This was the first Night Viper song made. Back then, Tom came up with both the lyrics and the basics for the vocals. It shows very much the core of Night Viper. It’s classic heavy metal, with a certain swing to it, together with catchy, soul scented vocals.

Tom: Absolutely. Y’know, I agreed to start working with Sofie Lee and Martin our first guitarist without ever having heard Sofie Lee sing. I was new in town and was just saying yes to everything at that point. I remember sending her the demo for this, and her sending a recording back with her vocal idea on it. I almost cried. Seriously! ‚Oh my GOD, she can really sing!‘ I got so excited thinking about the possibilities. I remember telling people it sounded like Tina Turner singing for Judas Priest. I’d had this song in my head for at least 10 years at the time, so I was overjoyed to finally be able to do something with it.

Sofie Lee: The lyrics for this song has almost kind of a hardcore-tone to it. It’s quite dark and depressing, but also about finding some sort of happy place outside of that.

Tom: I like the melodrama of this song. Sofie Lee’s melodies are so evocative.

Sofie Lee: So the vocals for this song was actually suggested to be AC/DC-ish. This was the closest we could get.

Tom: Ha! Yeah, I remember saying that. This was another song I had the basics for for a looooong time. I still can’t believe it turned out to be such a good song. I wasn’t sure I was ever even going to show it to the band. That mid-paced head banging riff is hard to resist. It’s nickname for a long time was ‚Megalife‘, ‚cos I think it reminded Ruben our bassplayer of Megadeth. I can certainly hear that.

Sofie Lee: This song’s about being considered ill in a very sick world.

Tom: The main riff on this came to me after listening to a bunch of Ted Nugent. It’s also got a lot of Motörhead in it. This is one of my personal favourites. I think Sofie Lee did something amazing with the melodies on this. Again, it’s so catchy, yet so tough. Kids, if you listen to both Abba and Venom, you could grow up to be as talented one day too. Haha! We weren’t shy about the big rock ’n‘ roll ending when we recorded it, either. I like that. Bands sometime take away that stuff when they record, but we just did it the way we do it live, and I’m glad we did.