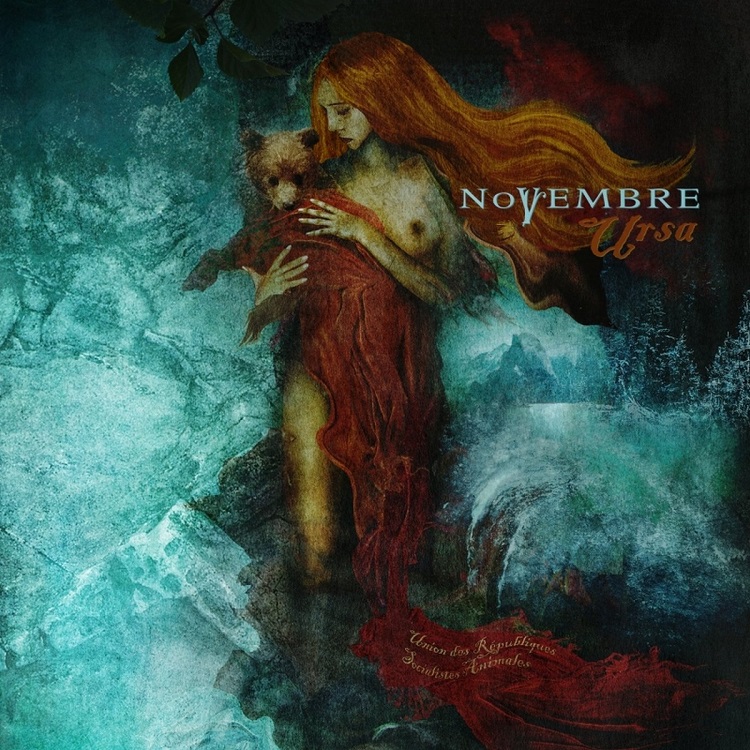 Australis, the opening track. It’s the first thing you’re gonna hear from us after nine years of silence. Quite a defining moment. It starts with a calm shore sound and major chords (quite rare in our compositions) to empathize a sense of rebirth, a new beginning. It’s a track which has different moods, a panorama of sounds and emotions spanning from hope, to rage, introspecting calmness and impetuousness again. The track’s ending has been blessed by the touch of extremely beautiful piano notes, courtesy of our friend Riccardo Studer.

The Rose kicks harder. It bears a Russian-like theme throughout its whole length, both vocally and harmonically. There’re many scale step-ups and a haunting refrain, which leads to the tracks higher moment, which is Massimiliano solo! This is probably the only song where there’re two solos actually, the other one being mine. There’s an unusual, stand-alone ending which is quite riddly and enigmatic, made of low guitar tapping and ambiances.

„Umana (Italian for ‘humane’) is quite an old track, maybe 8 years old but it somehow managed to remain fresh. It’s the first step into our new era, where songs got rid of useless frills and soar up above easier.

I like to think of it a new ‘Nostalgiaplatz’. At least that’s the mood it draws you into as it begins. Then it gets wilder and screamy. The ending part is a “crescendo” march leading to a of chorus climax.

Also lyrically, we expanded into new territories, a no-mans land where philosophy, sociology and psychology meet. We let a giant like philosopher Jiddu Krishnamurti speak for us.

It’s a martial and austere track. Quite medieval in its visions and harmonic curlicues. A truly old-school doomy track with reverbed guitar harmonies and piano ornaments. Clean vocal harmonies and screamings cohabit this hollow monastry.

This is the title track. We’re very attached to this one. There’s some eastern European folk vibe about it. Reason why we relate to this one is because it deals with themes we’re very interested in lately; such as Animalism and the George Orwell’s narrative, issues that only mirror the inner state of our soul.

As I said in other circumstances: This song was the title initially chosen for the French translation of Orwell’s masterpiece ‘Animal Farm’. It was the acronym for —Union des Républiques Socialistes Animales (and ‘Ursa’ means also ‘the Bear’, Soviet Union’s symbol) but eventually it was changed in fear of Stalin’s counterblow. So I borrowed it.

It perfectly suits what I envisioned as this song is played: I loved its bone chilling ending flutes.

Not sure which is my album’s favourite, but it is certainly one of the best candidates.

Big, big pain to write. Not sure how many versions of it have been written but in the end we’re proud of it. This song is relax, it’s fresh air, a trip back to our wombs.

Also seagulls, ocean-waves. And Dan Swano was able to blend everything nice and clean.

Tatiana Ronchetti is singing with me. She has a uniquely delicate voice which helped creating the right mood. What truly makes the difference here is a saxophone solo from Paolo Sapia. He definitely gave the song the Floydian vibe I was looking for.

This is the wild one. The single track. There’s gonna be a videoclip of it.

It’s the typical track you wanna head-bang to. The sound is massive and Dan made sure it sounded great. But the best thing this track could benefit was the guest solo, performed from Anders Nystrom from Katatonia.

This is a track that needs proper introduction. It’s definitely a stand-alone. A nine minutes instrumental which I was never sure we could pull off. I think it’s 20 years old. I must have written it right after ‘Wish I could Dream It Again’ was released, back in 1995, but it was too pretentious for me to even show to the others, so I kept it in the drawer. Back then I wrote a clear structure of the track but I wouldn’t know how to play it, how to organize the clean guitars, the classical, the acoustics. Let alone the effects it needed in order to be a functional track and not just a bunch riffs glued together. For some people (like myself) song-writingship and musicianship don’t go hand in hand!!!

It needed its time to grow up. I’m not sure how many guitar tracks are there but they’re a lot. And during the recordings Massimiliano was about to give up. He was always telling me Pro-Tools wouldn’t make it. But hey, it did, and once again Dan worked a miracle, a masterpiece of mixing!
It’s folky, it’s Slayerian, it’s Black-Metal fast, chaos, evil spirits, and relaxing harmonies. Massimiliano overcame his shredder’s abilities with a solo of rare beauty and speed!

This song is a song of mysticism, uncontrolled homesickness… a journey to hell and back. Something Ulysses must have experienced.

It is probably the most ‘Death Metal’ of the lot. And it’s not. Btw, it starts with a fading-in early-Maidenian arpeggio and then it attacks with a typical northern European Death-Metal crushing riff which takes good part of the song. Then all of a sudden it gets dramatically sad, with minor chords and vocal hamonies (fifths mainly. I love the fifths, so medieval). Then a dark arpeggio which paints thunder and lightning, which turns into one of the most devastating riffs we ever wrote. David Folchitto final double bass made it epic. And yes, as some of you might have guessed, lyrically I took inspiration from the novel „Town Musicians of Bremen“ by the Brothers Grimm. Animalism once again, mixing with my visions, of war, depersonalization, empty halls, severance and the usual suspects!

Fin is a little diamond to me. Precious, white and cold. Foggy, lost in some other time. I love it. It came out exactly as I could only dream it would! And I thank Dan Swano for that. A misinterpreted mix can ruin a song forever and make you hate it. Not quite the case!

It starts with a 70’s ballad flavoured arpeggio, where jazzy brushes and string orchestrations complete the painting. The track grows throughout scale changes and vocal harmonies. In the middle part we could experiment a few things with delays, keyboards, vocoders, in a truly intimate march lead by a ‘heartbeat’ effect. And then the final apocalypse, a super crushing reprisal, where Dan experimented a lot with my voice.