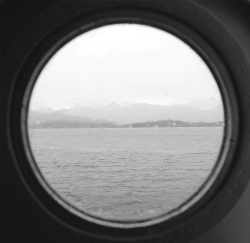 This opening track started off as more of an afterthought when writing. We had the one progression, but there wasn’t a lot of depth. However, I would say it’s the song that started Erik’s synth addiction (he has bought 4 in the past year). Once he started playing around with keyboard and synth sounds, it paved the way for the string melodies and overall cinematic quality. We ended up incorporating a lot of vintage analog synths all over the rest of the album. We had toyed around with the idea of keeping it an instrumental, until one day I was running through my neighborhood and the vocal line came to me. After that, I couldn’t imagine not having it in the song as long as it was kept simple and sparse. I think its place at the beginning of the record perfectly sets the tone for the remainder of the songs that follow.

This song was one of the first songs written for the album that laid a solid foundation for building other songs around. It was also the song that swayed our decision in working with our producer / engineer, Erik Wofford. He had emailed us offering to record a song free of charge, because he really wanted to do the record. It exceeded our expectations and we ended up using that recording on the album. The title “Celtic Mist” was actually sort of a joke, describing the chimey guitars in the beginning. It was intended to be a working title, but after calling the song that for over a year, we couldn’t possibly imagine calling it anything else, so the name stuck.

„So Close“ is the last sequence of the first three tracks on purpose. We originally discussed the first 3 tracks as being one long, extended song. After a while, they each became their own separate ideas, however, you can still hear the threadline in that they are each in the same key and still flow really well together when placed back to back. It was always a given that these three songs had to be placed next to each other no matter what. I love this track because it’s not a traditional, verse-chorus-verse type of song. Instead, it’s linear and focuses more on mood than structure. The bass line that Colin wrote probably stands out the most. I remember we used this incredible Moog Voyager that Erik Wofford owned that added a really nice texture to the guitar solo. Erik Wofford also reversed the tape I was recording on with whispered overdubs of my vocal to create a pretty subtle effect, but makes it interesting.

I remember we were at our practice space and, I think, Colin stepped outside for a break and I picked up the bass, while Erik was messing with his pedals. By the time Colin, came back in, he realized we were in the middle of a good idea and contributed by adding some auxiliary percussion. By no means would I call myself a bass player. I tend to approach that instrument like I would a guitar and strum a lot. For whatever reason it ended up working. Erik barely plays guitar in the song, but he manipulates his pedals throughout the whole thing before also joining in on drums, which took a lot of practice to sequence just right. You might recognize the In Rainbows influenced drumming in the beginning of the song.

The transition from „Frozen Planet“ to „Frozen Reprise“ is a favorite of mine on the record. It’s a subtle way of connecting the entire album together as one complete thought. It’s also the most intimate song on the record, so it gives the listener a chance to breathe before the second half begins. I originally had written an extra verse, but realized the song was more powerful without it. It was a treat to have Chris King from the band This Will Destroy You come into the studio with his amazing keyboard and space echo and play on the song. It added this warbly texture and when solo’d on its own sounded like something from Carl Sagan or an old 70’s educational video on sea life.

„Blueprint“ was a song that was written and recorded in just three days from start to finish, which is unheard of in this band, we tend to be very meticulous and slow in our songwriting process. We had pretty much finished up everything in the studio, but we still felt like we needed another up-beat track to help with the overall balance of the record. We met twice to write in our practice space and finished the remainder while tracking. Interestingly enough, it ended up being one of our favorite songs on the album. Our producer/engineer Erik Wofford was able to come up with some really awesome guitar tones for this song. He knows exactly how to make our guitars sound like a wall of noise while still remaining musical. You can probably hear the early 90’s Slowdive, My Bloody Valentine and The Jesus & Mary Chain influence, too.

This was the oldest of the batch of songs from the new album. To me, it sounds like the bridge between our last record, Nothing Happens for a Reason and the rest of the songs on LOOM. Chris King added layers of synth and effects on this as well to complement the ending. I remember starting the lyrics back in 2010 in a van in Alabama while on tour with a friend’s band (now defunct) called For Hours and Ours.

The song was initially titled “Ekspeditionen 1927” in reference to the Norwegian expedition to the frozen Bouvet Island, but half of us couldn’t pronounce it, so we opted for the latter, shorter version. Lyrically, the song has more to do with the idea of giving up on your own future and potential for the comfort and stability of a marriage, even if it’s not working. What sounds like a keyboard at the beginning of the song, is actually Erik’s guitar and there’s an underlying acoustic keeping rhythm, which is a little out of character for Pompeii. This is one of the songs on the album where the string arrangements really shine and we couldn’t be happier with the Tosca String Quartet’s performance. From a production standpoint, Erik Wofford did a fantastic job at putting each instrument in its right place, so that nothing was competing against anything else to be heard.

Parts of „Sleeper“ are reminiscent to what you might hear on our first record Assembly. It’s very dramatic and has a nighttime quality about it. This was the first song I started writing lyrics to around 2009-2010. The mood immediately made me picture driving at night and I had just watched the film Pollock with Ed Harris, where he portrays the artist Jackson Pollock and is seen driving intoxicated. I think the way everything crescendos at the end gives the record a sense of closure and relief before riding off into the sunset with “Drift”.

We had one song that was intended to be on this record, but that stood out like a sore thumb. It sounded dated (because it was) and that it should have been a B-Side off of our previous record. At the 11th hour, we decided to scrap it and roll the dice on a patchwork of a chord progression and guitar line Erik and I had been working on previously. I had to play bass and keyboard and arrange the drum parts with Rob while we were tracking with my scratch vocal. In the end, I am so incredibly happy we made the decision; because I love the feel of this and it’s proved a fun challenge for us to pull off live because there are so many layers happening. As previously mentioned, there is that “riding off into the sunset” vibe that helps bring things to a close.