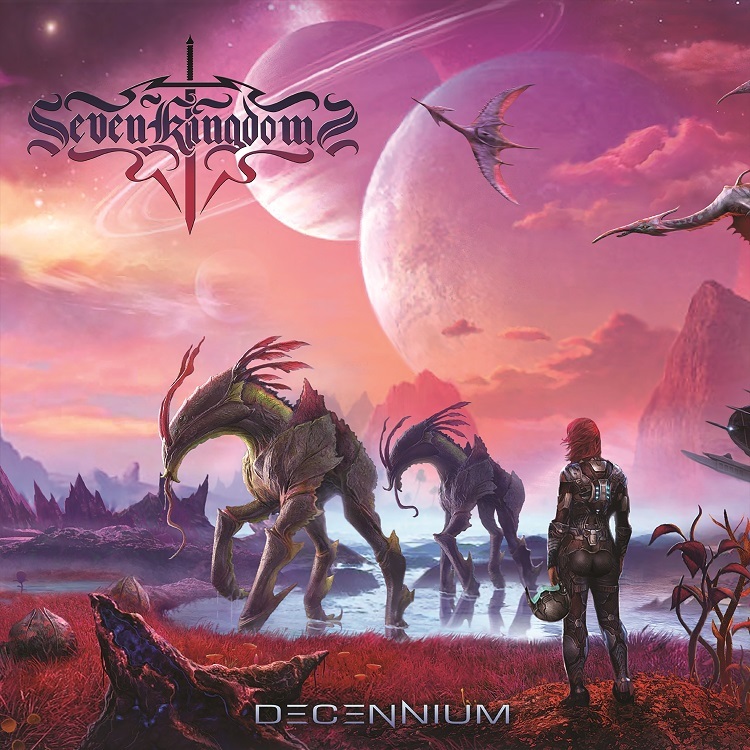 This was one of the first songs to come together on Decennium. Like many of the songs, this was originally a different concept that morphed into what it is.  I have always been fascinated by Space and the idea that there is more out there that we do not understand. The song tackles the ideas of what lies beyond, and asks the questions that we all want to know. There was a scene in one of the more recent Star Trek movies where they were flying into a Volcano to save a primitive civilization from extinction. They accidentally got ’seen‘ by the tribe, and because of their lack of understanding, they essentially started drawing the shapes of the USS Enterprise in the sand as if to document history. This concept could apply to real life with Ancient Cave Paintings and the whole Ancient Alien stuff. To me its fascinating!  Being a Sci-Fi fan, this is a thought that has always been in my head. What if we are that civilization? What if our ancestors experianced the same thing? We actually don’t really know… until then we should „question the unknown“ and continue driving humanity  forward, eventually into the stars…

I believe this song was the first completed song on this record. I wrote about 75% back in August 2014. I was intent on tackling an ASOIAF inspired song, and I really enjoyed the House of the Undying Ones chapter in ACOK. Lyrically, this song pretty much centers around that chapter of the book. This was the first guitar solo I wrote on this album too. I wasn’t intending on having any wah parts, it was a spur of the moment thing in the studio. I like how it turned out. (Thanks for lending me the wah pedal, Tyler!)

This one was written back in January 2016. I was trying to write something Power Metal as fuck and this song just started to take shape. The bridge section took the longest to finish. Camden just kind of whipped out that bridge riff and we jammed on it and things began to fall into place. It wasn’t until most of the music was finished that I decided I wanted it to be Lovecraft related. I also thought it would be an interesting dynamic to have horror themed lyrics with upbeat, Power Metal music. The Rats in the Walls was the first Lovecraft novella I’d ever read, so it has a special place in my heart. I thought it would be a cool way to honor it…

THE TALE OF DEATHFACE GINNY

Deathface Ginny is one of the main characters of Pretty Deadly, a comic book series by Kelly Sue DeConnick and Emma Rios. This song was inspired by her origin story and the first arc of the series. It’s a tale of revenge and destiny set in the old American west, told through the lens of folklore and with a little love for spaghetti westerns. I’m always drawn to strong female characters in fiction, so I couldn’t help myself sharing a song about the reaper of vengeance.

CASTLES IN THE SNOW

This oneis based on an iconic scene from George RR Martin’s A Storm of Swords in which Sansa Stark has finally escaped Kings Landing, only to realize she’s still alone in the world and completely at the mercy of others. She playfully builds a snow castle of Winterfell, which brings her good memories of the past, but is also a poignant reminder of the fleeting nature of happiness. For some people there is no good fortune, and life is full of more despair than hope…

This is a song about Jaime Lannister’s betrayal of his oath, which earned him that very nickname across the Seven Kingdoms. The Mad King was ready to blow up all of Kings Landing with stocks of wildfire hidden under the streets, rather than face defeat to Robert’s rebellion. Having already seen enough atrocities committed by the king, Jaime could not stand by any longer with the lives of the entire city at stake. He murdered the Mad King, the one his life was sworn to protect. Instead of becoming a hero, this betrayal would be how history remembered Jaime Lannister.

I am a fan of the Harry Potter series and have read it in full 3 times. I’ve found myself pondering Snape’s position through out the entire story. I felt that though we had a brief moment of some of the biggest moments in his life that revolved around Lily and Harry in the 7th book, we truly never knew quite the extent of his burdens and the challenges he faced to protect him. He was the Judas of the HP series, and spent all his characters time trying to secretly make up all his mistakes for the Love of his Lily. In 2013 I chose „The Faceless Hero“ song title, though the song had yet to be written. Because until the end, everyone believed Snape to be the bad guy, while an unseen faceless guide always seemed to look out and protect Harry. The Day Alan Rickman passed, my heart knew it was time. This song is my own personal interpretation of what I think Snape’s confession to Harry would have been, if he
had ever been given a chance…

This song is very personal to me. It’s very human, dealing with basic emotions and everyday struggles. Feeling lost in life, alone, uncertain. This is how I was feeling while I was writing. I really poured my heart into this one. I wanted to go for a different feel, musically. Solid, driving, not necessarily fast in a Power Metal sense. The drums and bass have some of my favorite moments and overallI’m super happy with how this one turned out. I think we all really nailed it… Fun fact: The pic slide during the intro was performed by Sabrina.

This is another song that was one of the first to be done on this album. This song is inspired by Frank Underwood’s (and his wife’s) Character in the Netflix Series, House Of Cards. This is one of my favorite series of all time. I must have watched all the seasons about 4 times! haha The idea that everyone is really just out for themselves and their own ideals should hit home to most anyone, and we can all relate to some form of political woes in one way or another. Nothing stands in the way of the Underwoods. They are able to make whatever needs to happen, happen, no matter the circumstances… which is a good and bad trait at the same time. Who would actually be shocked if our real government was actually exactly like House of Cards? I sure wouldn’t be shocked! haha. Strength is the biggest trait of the Underwood’s, but if you were in their position, What would you be doing? Would power spoil your morals? How do you cope not being able to make everyone happy? In the end, would that even matter to you?

This is a song about exactly what the title says. We went through at least 8 or 9 full sets of lyrics for this song and none of it was ‚right‘. Kevin, Bryan and I all went through what seemed to be a lifetime of trying to make words fit right. What you would call ‚Writer’s Block‘. We all ended up getting frustrated and passing it off to one another. In the end I remember talking to Kevin and both of us coming up with the idea at the same time saying, „Hey, what if this song is actually about having writer’s block and the struggle we go through to make something fit the way it should“? The second that concept came to mind, the words just magically appeared. They ended up fitting nicely, with the help of Sabrina coming up with the title of the song! At the end of the day, as a musician sometimes the biggest pains become your inspiration, and this song is a testament to exactly that. So here is a story, Awaken From Nothing..