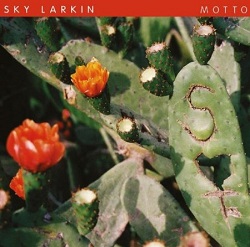 Title track at the beginning. Somehow I’ve only really just realised that. I think this song in particular captures our statement of intent, the urgency and immediacy of a record written in grabbed at moments of time where everyone was fleetingly in one place, so it’s fitting that it comes first and doesn’t wait around for an opportunity that might not arrive.

This was the first song written for what was to become this record. I like to think you can hear the tentative steps towards a larger whole in the pushes and pulls in tempo and dynamic as the song rolls from verse to chorus and back. I’ve a real soft spot for playing this song live as I get to be about as subtle as I’ve ever been behind a drum kit in the verses, carrying the pulse of the song on the snare drum, but leaving room for guitars and vocals to wash over the top. Smooth.

For me this song hit home just how big we could sound with another guitar in the ranks. I remember finally nailing it in our practice space and being able to sit back a little and bask in the four of us creating such a dense wall of noise. It also reminds me of gasping for breath as, true to its name, this song is loyal and utterly relentless; I think you can even hear me spluttering at the very end…

I think the lyrics in this song are particularly great. Katie has a unique knack for poignantly direct yet cryptic writing, a tentative balance of letting people into her thoughts but delicately withdrawing to allow listeners to reflect upon and apply the ideas and emotions within them. It totally blows my mind. I won’t claim to know what, when or who she is writing about in ‚Treasury‘, but the sentiment of the song hits me square between the eyes, every single time. Also, props to the whistle, there isn’t enough whistling in music these days.

I remember us playing this through a few times at practice then simultaneously looking up at each other about to ask whether it needed ‚more‘, being just over two minutes long. Fortunately, we immediately decided that it did not. I think this song is so much more powerful in its succinctness and apparent simplicity, it implicitly voices everything that needs to be said about living through a difficult period of time without romanticizing it for the sake of song, giving it and those it affects the respect each deserves.

This is a song that took me a while to fully understand, I kind of had to take a breath, step back and look at/listen to it from the outside for a while in order for it to click into place. Of course as soon as I did that I completely fell for it and, although I of course love all of our musical offspring the same, it is perhaps my favourite song on the record. The skipping chorus drums in ‚Carve It Out‘ actually came about through me hitting myself on the hand whilst trying to work out what to play, but hey: no pain, no gain, right?

The first half of ‚Tarn‘ is so solid and dependable and the second half is so sprawling and unpredictable that I sometimes forget they’re the same song. It’s not until Katie’s haunting lyric couplet floats back in to tie the two halves together that the song attains any sense of closure for me, although that too fades quickly away. The song feels like the aural equivalent of a double-take or a photograph and its negative, laid side by side. Unsettling in the best way possible.

Katie and I have been writing and playing songs as Sky Larkin for something approaching ten years now and I think that shows in the pace and feel of this song. The confidence we have in ourselves and each other as musicians and as bandmates to let the song lead us and build almost of its own accord wouldn’t have been possible without all that time spent together in the dingy practice spaces, the sticky venues, humming vans and what sometimes felt like hermetically sealed studios. All worth it for that bass solo; just the slickest.

I can’t directly look at my hands whilst playing this song for fear of fumbling or hitting myself in the face, but aside from that, this song is one of the most fun to play on the record. I think it was Josh Homme (off of Queens of The Stone Age and Eagles of Death Metal, no less) that likened the best drum rolls to falling down the stairs. Following his example, I tried to make the rolls in ‚Bravo Dodo‘ sound like diving over the edge of a water fall or off a cliff, with the huge, swinging chorus as those triumphant and invigorating first few breaths of air after the leap. Phew.

This was originally a song in its own right as a stellar collaboration between Katie and our immensely talented producer friend who goes by the name DREAMTRAK, so when the idea was first floated that we adapt it into a Sky Larkin song I was apprehensive that we’d really be able to do it justice. However, we worked and worked at it; building it up, only to strip away even more until we had what you hear now. I love that we, as a band, practically butt in at just over a minute into the song. I think it pays its dues to the ethereal space and structure of DREAMTRAK and Katie’s original, but also allows us to strike off in our own direction and make one of our most individual and bold tracks, both on the record and that we’ve ever done I reckon.

Oh my, that guitar hook! I could play the rolling semi-poly-rhythmic drum parts in this song forever, but that guitar part knocks me right out of my stupor and into the cacophonous torrent of words and (almost) four to the floor pandaemonium. This was one of the last songs we recorded, if you listen carefully at the end you can hear the cracks in the ride cymbal I (ab)used (I am so sorry), and as that guitar hook eases back into play yet again I can’t help but smile at the memory of realising how much we’d been through and ultimately achieved in birthing this record. Aw.

We ended our last record with a quieter version of a previously released track (a ’shh version‘ in fact) and I feel like ‚Que Linda‘ follows in the same curveball suit. Adapted from an almost stream of conscious demo Katie brought in, this song feels like a renewed eruption of potential and motion, the very antithesis of an album closer, and, in that respect, a fitting cyclic companion to the drive and energy of our opening track, ‚Motto‘.

The artwork for this record is comprised of photos taken by and of us throughout the writing and recording of the album. From technicolor cacti in foreign lands to the misty moors, not much more than an hours drive from where I’m writing this, to keepsakes that remind us of what it is we do, wherever we are, each picture captures a moment in time, just as each song does. Each is a reminder to me, and hopefully an insight to you, of the unifying process of this record and of us as a band over the time it took to become a reality. Plus, the vinyl is transparent. SHWING.