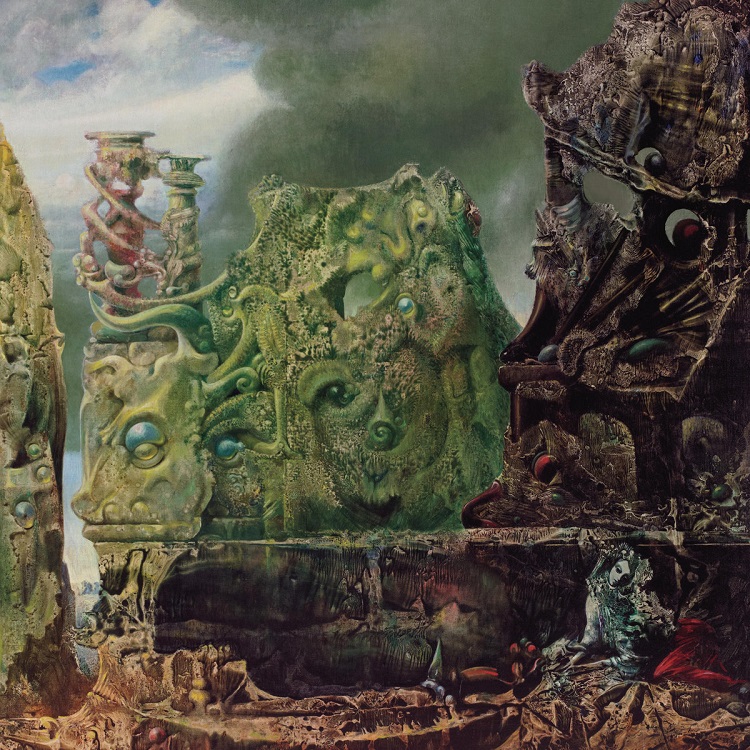 Having been asked to acquire a statement on the work by the painter himself, the band members made an effort to contact Max Ernst via traditional means such as email and telephone. Unfortunately, this proved to be challenging, since the German artist passed away in the year 1976. However — not to be deterred by such trivialities, they decided to instead reach out to Max via séance, using a ouija board. The following is an account of their experience: Last night, on the eve of the Sabbath, the three of us gathered in a dusty basement around a circular table. It was dark, lit only by the glow of 13 black pillar candles. Together in unison, we asked Max Ernst to comment specifically on our use of his painting „The Eye of Silence“ (1943-44) as the cover of our heavy metal record „Opulent Decay“. Then, we placed our hands on the planchette and began to chant. Soon, eerie groans begin to emanate from the darkness. Our chanting was not halted as wine glasses flew from the cabinet, shattering around us. The candlelight flickered and all but one were blown out in a wisp of smoke. At the stroke of midnight, the table began to shake with great force. The planchette moved rapidly around the board and finally a message was relayed to us by the man himself. With excitement, I pulled out a pen to write down his message, but in classic German fashion his reply was blunt and to the point – a single word: „SCHADENFREUDE.“

We would like to believe that Max Ernst, who had no hesitation holding truth to power through his brilliant work, would approve of our use of his painting on our album cover. The visual splendor of „The Eye of Silence“ fits perfectly with our intentions for the album, which are around bringing light to the ruin that wealth can cause and finding the beauty in decay. We were honoured when Max’s family estate approved our use of his painting for our album. I first came across „The Eye of Silence“ in the dusty basement of a bookstore, flipping through disorganized stacks. I’d been searching for weeks for the perfect cover art for „Opulent Decay“. I opened a book on surrealist art and there it was: opulent decay, exactly as I imagined it. To me, the painting shows a landscape of intentionality stripped of intention – a monument of decay, an object in its most essential form: a state of ruin, without function or legible intent. It fit perfectly with our vision for the album. While recently discussing the dichotomy of opulence/decay with Al Lester (our drummer) in relation to this painting, he pointed out that the contrast between these two apparent opposites can also become a third unique thing: the state of ruin itself, where decay becomes a new and unintentional aesthetic – a fleeting, transitional identity that is not what it was meant to be and not what it will eventually be, but what it most wants to be at the present. Like an empty building or an eroding cliff or a decomposing body, this brief state is when a thing is at its MOST extravagant, with the most colours, the biggest sensory features, and when it calls out the loudest! When a place still retains the sense of awe and grandeur that it was originally intended to have, but also the feelings of loss, emptiness and dread that come with it’s decomposition, and each of these feelings are amplified by one another. This is the romantic allure of „opulent decay“, and perhaps also the state of our world at this moment, as we are under the spell of the covid-19 virus: the systems and structures of our former ways of life are still in place, but they’re all in question and beginning to rot after months of neglect. Perhaps today, Max Ernst’s masterpiece is more relevant than ever.