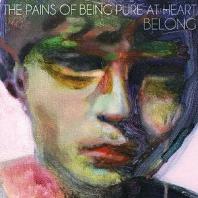 One of the songs we were so excited to record that we started playing it in soundcheck and out live before there was even a recorded version. Feels maybe heavier than anything we’d done before – big guitars, overdriven bass, gang vocals. Belonging (or NOT belonging) is also a constant Pains theme.

We played around with this one a lot in the studio, trying out a variety of effects, arrangements, tempos, keys – but ultimately went with a version that was more faithful to the live version we’d played out before going into the studio. Christoph’s divebomb guitar lead thing is our favorite bit.

HEART IN YOUR HEARTBREAK

The last song written for the record ended up being the first single. Flood actually encouraged us to record this version with no cymbals at all, which was definitely a departure. It gives it a more restrained, almost new wave-y feel than any other Pains song to date.

This is a song we’d loved in demo stages, but hadn’t ever been able to quite pull off live or with a full band recording. We worked on it hard in the studio, adding a bunch of synths, drum programming, a new bass line, and a new arrangement. Kurt’s drumming on this is especially inspired.

ANNE WITH AN E

The ballad, I suppose? This originally wasn’t gonna be on the album (and maybe not even a b-side), but we recorded it over a weekend, feeling pretty at ease and low-pressure about it and it ended up sounding better than we’d anticipated. Also some of Kip’s darker lyrics on the record.

I think Kip said he was going for a Weezer chunky bit on the guitars here, but of course our version of Weezer isn’t very Weezer-y at all. Kind of a slow-burning epic one, compared to some of our other songs.

Four more chords and some lyrics about feelings. One of the new songs where the lead synth line is the primary melodic element. We spent way too long in the studio adjusting and re-adjusting parts of the 15-second long breakdown. (Mostly my fault.)

Another late addition to the album, originally meant as a b-side. The mix is all scratchy and loud and messed-up, just how we like it.

Kind of our Tom Petty song? Really simple, but really fun to play. There’s a part where a slightly discordant synth note rings out for a few bars that’s my favorite bit in the song.

An endless loop of chords with all sorts of guitars and synths coming in and out. Weirdly sort of hypnotic — sometimes I wish it kept going and going. Buried amongst all the flotsam and jetsam of new tracking is the original demo drum machine loop. I like to think it keeps some of the original spirit of the song as Kip originally imagined it.

Belonging (or not belonging) – the tricky game of growing up and finding your place in the world is a theme that runs throughout much of Kip’s song writing.

The cover is a painting by a Brooklyn artist named Winston Chmielinski, who we’ve been a fan of since we used another piece of his for the cover of the „Say No to Love“ single. I love how dark and expressive and textured his paintings are.