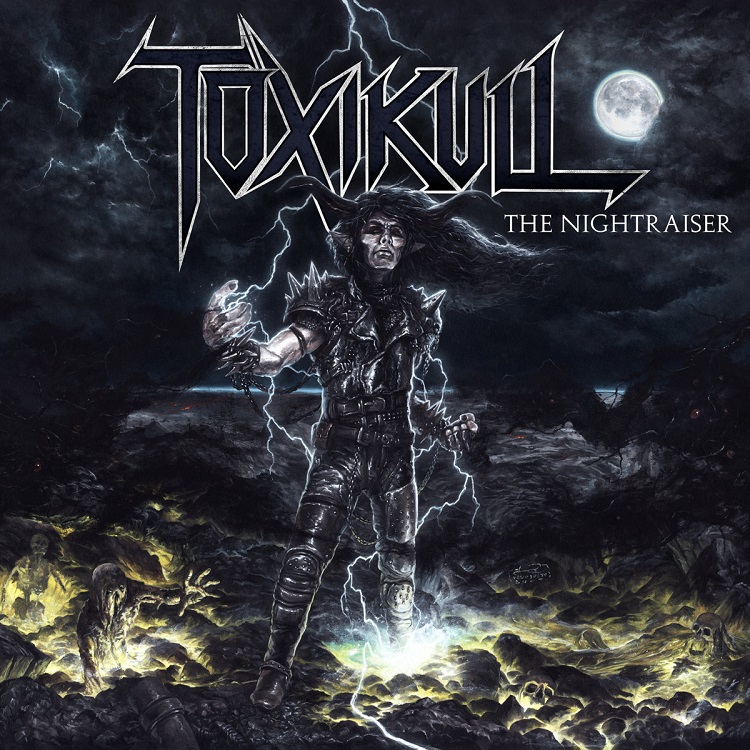 It’s the first song of the EP, and the name of it. The whole EP is based on this track, and all the other songs are influenced by the essence of this one. The intro riff is supposed to be an epic introduction to the destruction that comes next. With some obvious Judas Priest and Enforcer influences. The rest of the song is meant to be fast, furious, and direct. The character that appears on the CD Cover is the visual reflection of the song.

The cover’s story is about a creature that represents the night, the rise of pure and bloody justice taking its toll on the fake spotlights of the day life; the night swallows the dawn and its false sins. It’s not a creature that kills for pleasure or without a motive. It’s a cleansing of a universe in which death comes in its natural habitat, the night, and undresses all souls of their essence, eliminating those who live in the blindness of the daylight. It’s a social metaphor, and a call to rebel against abusers and false entities, be them persons, institutions or even tendencies.

This song is about one of my biggest passions, piracy. I have a tattoo of my idol’s flag, Bartholomew Roberts aka Black Bart, on my right arm. We decided to make a diferent song about piracy than the ones that existed. You know, all pirate bands talk about pirates like it was something really cool and nice. Like it was a really good way of life with parties and that stuff, but that is a lie! It was all about surviving, killing, being killed, and being against the sistem, i.e. the crown. Really hard times, with no future, with lots of sacrifice, and the only thing that made them go on was the honor of the flag. The song is about that. And as usually it aplies to nowadays. It’s again a call to the rebels. Fight against the system, with no fear! Musically we tried to get some heavy, thrashy riffs for the verses, with bloody lyrics, and in the chorus something more encouraging. Obviously it’s based on pirate melodies and songs.

Well, with this one, it is not difficult to get the influences. Obviously, it’s King Diamond and Mercyful Fate. The song is about a woman being possessed by “the beast”, and as the songs passes, the more the sacrifice reaches the end. Til it’s done. If you read the lyrics, you will notice that the intensity grows with the instrumental parts. It’s supposed to be a scary, obscure, sinistral song. Also we did something for the first time in our history, we played a bit of black metal with blast beat drums after the solo to get the maximum darkness possible. Praying to Satan!!

If you sometimes feel like a sociopath or a psycopath, this song is the right one for you. Musically, we got inspired by Slayer’s first albums, and the chorus by Venom, and Master. The C part has a bit of Suicidal Tendecies and old Megadeth (especially the guitar solos).

The song is like an outflow of the pressure that society puts on your shoulders every day, with rules, orders, laws, and basically your primitive instincts are supressed til you don’t accept them anymore. Guess what? There are some dudes that cannot supress these insticts, because they become crazy and schizophrenic on the inside.

This song is the inside of one of these minds, turning everything that is supressed into reality. Against all society, against all the rules, against all opinions of good behaviour, against any type of organization. “So light the darkness in my head!”

This one was supposed to be another song influenced by Mercyful Fate, but in the recordings it ended up to be a bit different. The lead singer of this one is Antim with his mighty viking voice. I think it’s the song that’s closest to our precedent album “Black Sheep”. I don’t know if there is any band that we can compare this song, or the influences, except the solo parts, which are Black Sabbath style with melodic twin guitars. Lyrically, the song is about the rage of Satan, like a curse above men, and the quote „Satan Bloody Satan“ is like a celebration of evil.

Guns ’n Roses was my first great passion band in hard rock and heavy metal. I passed my teenage years listening to every song of the band, including the members‘ first bands, like Hollywood Rose, L.A Guns and Rapid Fire. And I always loved the song „Rocker“ from Hollywood Rose and still don’t understand how no one ever made a cover of this killer tune. It’s a rebell song, with wild vocals, old school punk riffs – everything is awesome! Only the recording is a bit sloopy and too raw, and that was the main point that fired up my desire to make a cover of this. Without a doubt, the song deserves to be shown to the world again. Its a hymn.