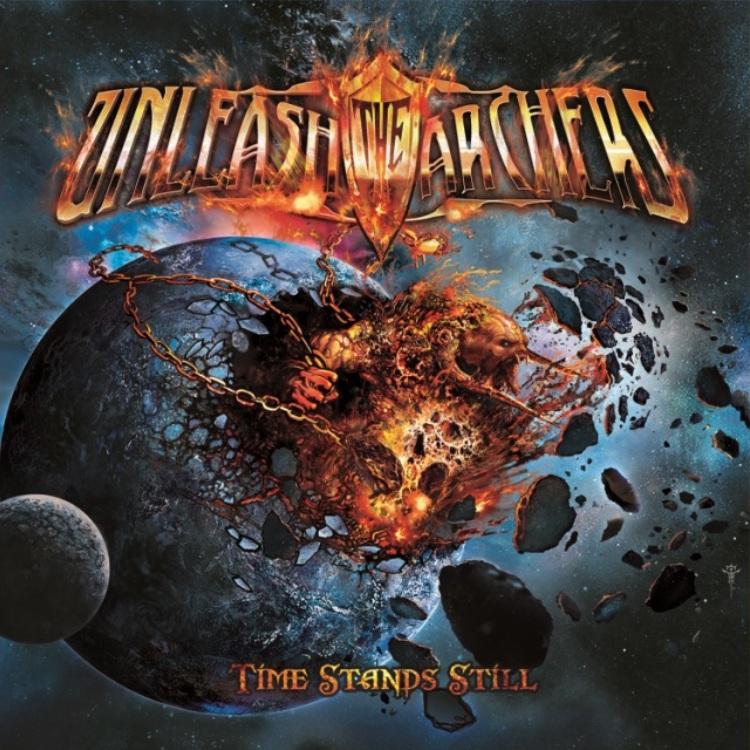 The album begins with an instrumental introduction that was written by using the melodic structure of our title track „Time Stands Still“ and breaking it down into a much simpler progression.  We wanted the album to begin and end with the same feeling, like bookends to the record.

This song is dedicated to the hard-working metal fans in Canada.  We are a little bit lost and forgotten up here. Big tours rarely come through, the winters make it very difficult to attend shows, and the cities are so far apart from one another Canadian bands can barely afford the gas to get from one show to the next.  Yet – despite all of this – when we book a show, no matter if it’s small town Ontario or our hometown of Victoria, the venue is always packed and the support is relentless!  We absolutely love our Canadian fans and they will always have a special place in our hearts.

HAIL OF THE TIDE

When UTA first started out, we lived on a large island off the coast of BC and any time we wanted to play somewhere other than our hometown´, we were looking at paying for a very expensive ferry. This is what prompted us to move to the mainland in 2010 to the bustling metropolis of Vancouver!  However, about twice a year we return across the water to all the fans waiting for us in Victoria and the shows are always amazing. „Hail Of The Tide“ is about that ferry crossing and how exciting it is to return home to those that have been there with us from the beginning!  This song was one of the first contributions to the record by our new guitar player Andrew Kingsley. He had the opening riff hidden away in his brain, never used but always remembered, and he was nice enough to give it to UTA.

Any band that has ever had some sense of ambition has hit the road in pursuit of a dream: to one day tour the world!  UTA began with touring our home province of BC, and then we branched out to Western Canada, then all of Canada and eventually all of North America.  No matter how big or small a tour may be, there is always that anxious, impatient feeling the night before you leave.  „Tonight We Ride“ is an expression of that torturous anticipation!  Which quickly dissipates after you’ve been sitting in a smelly van for 8 hours straight. This song began with Grant’s crazy solo at the beginning and we built the rest of it around that.  Originally I sang the verse quite a bit lower, but one day Grant suggested I bring it up the octave. We figured if I could do it. It was meant to be!

As I mentioned above, most bands that actually want to pursue music as a career will eventually get out and tour.  However, there are those that are content with staying in their hometown and playing to the same crowd every weekend. This song is for all those hometown heroes, encouraging them to get out and take a chance on a city that isn’t their own!  The chorus started this track. I basically just sang it to Grant and he recorded a voice memo on his phone.  I then laid out how I imagined the song structure should go and he and Andrew built on that together!

This track was another gem from Andrew’s “Bag o’ Riffs” as we call it. He had written the opening riff a long time ago and brought it to jam.  It was heavier than anything else we had at the time so we decided to use it. Everything else stemmed from that one riff.  I loved the darkness that was inherent in the track and so I wrote the song about the long highway drives we Canadians face in between all of our main cities, which can sometimes make you feel like you are trapped in a coffin.

Both Andrew and I are big fans of melodic death metal, and at the time of writing this track we were listening to bands like Soilwork and Mercenary.  This song was very much influenced by both of those bands, and it was also the chance for our guitar players to showcase their progressive side.

We wrote this song during a very transitional time for us, and it reflects the roller-coaster ride that is being a musician.  We all put a lot of heart into our parts on this one, so much so that it ended up being almost ten minutes long, but we just couldn’t cut any of it so we left her as she is.

Once again, this track started out as just a chorus in my head, so I recorded a voice memo and sent it to Grant and he wrote the rest of the track around it.  This one is interesting because every phrase begins on the upbeat, so it’s got a killer groove that you just can’t help but bang your head to. Scott hated me for writing it that way because all of his cymbal accents have to be on the upbeat.

Being the last track on the album is fitting for this one because it was also the last track we wrote for the record.  We were very casual about this one. Basically we just jammed out in our practice space seeing what felt right and what riffs we did or didn’t like.  I think the whole thing actually just started with the broken down chorus part in the middle, with me singing whatever melodies came to my head while Scott drummed out the beat over and over again.  We knew how we wanted this song to make the fans feel. It had to be a song you couldn’t help but sing along with and throw your fist in the air for!  I hope we succeeded.