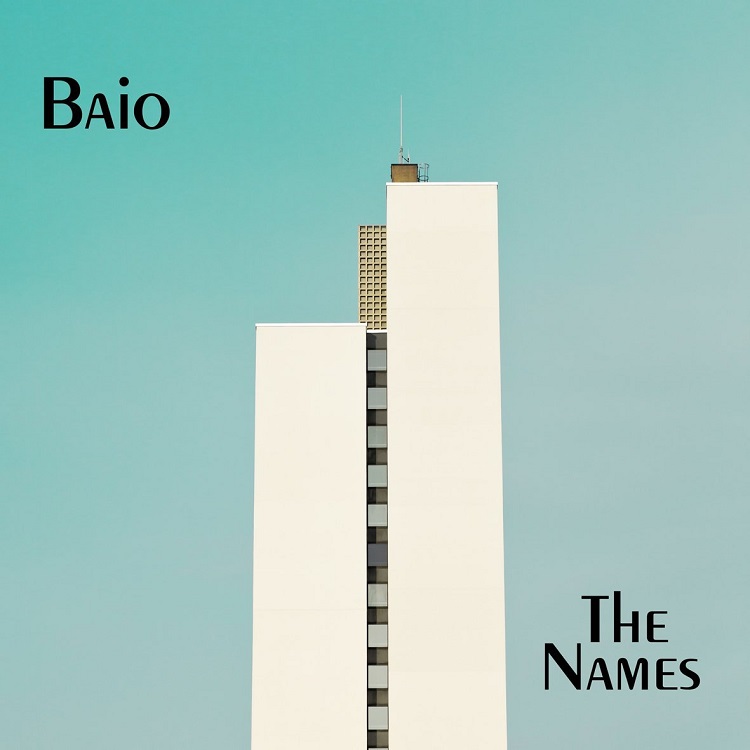 I love Bowie and Ferry! They influenced me so much and I guess you can hear that on the record. All in all The Names is about pop songs and done smart arena-techno. That’s like a genre I made up. There’s something so powerful about house and techno music where there’s literally the same beat but you can do anything around that. You have infinite choice and that’s why I call it done smart.

I tend to never work on music while I’m travelling. For whatever reason I was on a plane coming back from Japan two years ago and I was in the mood to start the track. I wanted to have this weird pause running through this and this sound like some goose being choked. I put those chords under it and left it alone for a while. I really wanted the structure to be very unlike every other song that I knew. I bought this record in New York that had a capellas on it and sampled like eight different songs and wrote a chorus melody. It’s a little bit a Roxy Music song. It’s like verse-chorus-verse-chorus and then it has that extended techno outro. At one point I didn’t know how to fill it up with sounds, so I took a walk and got all this interesting sounds with my phone. I think having a crazy first song is a good way to establish that anything can happen. One of the first times I played that for someone and he heard “The Names” afterwards, he was like “you kind of ruined it with that first song” and I was like “Yeah, I know, but I still like it!”.

I started it in 2009. I was outside the rehearsal space that Vampire Weekend was using in New York. I was holding a guitar on the street because we were waiting for a band member to get the Van. I just wrote that progression which was five chords, as many melodies as I possibly could and I spent a couple of years with that. Around 2013 I started writing lyrics. It’s a little bit about having someone in your life who’s going through some tough time and not knowing how to help him. I wanted to do it in an abstract way. At the same time I could never get the chorus to work. Only towards the end of last summer I finally cracked it. It was this insane puzzle that took me so many years to figure out. Once I solved it, I was in a very good mood for the rest of the week! It’s my favorite song on the record. Anytime I make something, I’m listening to it obsessively when I’m done with it. And when it comes out, I stop listening to it. It’s like it’s my own little secret and once it’s out it’s not anymore. This one comes out in three weeks.

This one came together quite quickly. Instead of taking five years it took me a day. I didn’t really think much about it. It just came right out of me.. That really just happened twice in my life and that is one of them. I knew exactly what I wanted the track to be. I’m a very big fan of Brian Eno and David Bowie, so I wanted to make a track that was a bit of a tribute to both of them. Obviously it’s a reference to the Roxy Music song “Mother Of Pearl” and the Bowie song “Boys Keep Swinging”. I gotta say: I was really nervous about singing the high notes and I’ve been practicing. Now it’s really satisfying to hear them.

I WAS BORN IN A MARATHON

This one took a long time because I had very different versions of it. I was thinking a little bit about America because I left it. Moving to London in 2013, I found a lot of people that I care about had gone through a tough period in the US before and came out much stronger in a really good place. I was so happy that they were doing well. At the same time I felt a bit disappointed in myself for not being aware politically or not aware of issues that were continuing to go on in America, so I wanted to have a song that encapsulated that.

That one came together very quickly like “Sister Of Pearl” did. I was listening a lot to The Cars. Their „Greatest Hits“ is such a great album. I really wanted to make a song that was kind of like Cars with a funk swagger. I had a bass line that I thought was very funky and then a straight groove, a muted guitar, a little bit of synth. I realized that I sing with a british accent in the chorus: just on the word got like you’ve got your needs. My wife pointed that out. I didn’t mean to do that. It’s not like living in London has changed the way I talk. I was really just trying to make a catchy hook and singing it in a british way just made it stick in my head a little bit more.

I’ve always been a big fan of a lot of electronic music. I really was thinking of stuff like Modeart’s “Milk”. I like sad techno tracks. I wanted a sad banger and I knew I wanted the last three songs to be the happiest on the record. I am an optimistic person, so I like the idea of moving from dark to light. So this one finishes the dark side of the record. I was thinking of three things: The Fjodor Dostojewskis book “The Idiot”, which I really love, the film by and the Iggy Pop album “The Idiot”. I studied Russiand and actually an iditot is someone pure of soul. In American English you would never think that. You would think of a stupid person. I find that very interesting, so that’s why I called it like that.

I wanted to have a sweet love song. I like a lot of rap music that has like lazer beam-synths. A lot of them sound better in angry songs, so I wanted to write a sweet love song with that. I think it’s just kind of true to my personality: that I tend to be a little bit non-confrontational in life. It’s also a bit influenced by “Six Different Ways” by The Cure – one of my favorite songs of all time.

It was the last one I wrote. I knew I needed one more poppy, catchy song. Last year two of our best friends of my wife and I were staying in London and we saw a painting that was called “Endless Rhythm”. The fact that a painting had a musical title blew my mind. It sounds dumb bit I was like whoa. So I was thinking a little bit about different creative mediums and the relationship between people and art. It’s my second favorite on the album.

That one came together very quickly. I was thinking a bit of Brian Eno song “Big Ship” and a bit about Explosions In The Sky, which is a band that I loved when I was a teenager and I love now and I was thinking: What if Explosions In the Sky covered “Big Ship”? That was kind of the idea. When I’m at home I tend to work on electronic music for a lot of the day and when my wife is coming home from work she’s making fun of me like “What do you do, you idiot!?”. She doesn’t really like electronic music that much but she said “Hey, that’s a really nice one!” when I was working on this song. So I named it Scarlett. That’s her middle name!