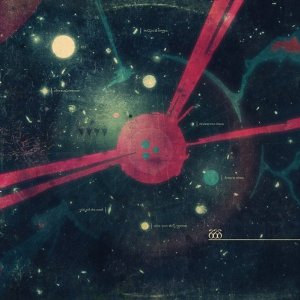 “So I wrote every little part myself. Mostly in bedrooms, in bed in the middle of the night, or out in the fields or something. Because it was all done on a laptop and that was the beauty of it, you were not stuck to the studio. So I thought what would something sound like if you took all that away and it’s just you and with the laptop and these programs you can make any sound out of anything. There’s no excuse, you can’t say, “I couldn’t afford an orchestra”. So that’s my favourite thing, that freedom went into the album and I think that’s why it has such peaks and valleys.”

Put the Gun on the Floor

The lyrics were inspired by the fact that one night a bunch of drugged, crazed people tried to break into my apartment and were also trying to break into the apartment opposite and one of them had a gun or something. I heard the woman, who was trying to protect her boyfriend or her husband at the door and she was like, “Put the gun on the floor!” It was just a really scary thing. The lyrics basically consist of that over and over again because that night was a very traumatic experience, so the music obviously really reflects that kind of grinding, hitting thing.

Side of the Road

Well, after that experience with that ex-girlfriend – I don’t know if you have ever had a near death experience, especially at the hands of another human being – but it makes you question a lot of things and makes you think about humanity and stuff. It was just a very dark time and that’s what fell out of me. It was a song about me dealing with her and me dealing with how I didn’t know how I felt about people.

It’s a positive song about the female form and my love for it. It’s pretty simple. Every song I create is very different, I wish there was a pattern I could latch onto as it would make everything easier – but with this song it was first music and then the lyrics followed.

I wanted a song that sounded like an old ship in the water – like woozy, creaky and cranky. You know like that old cliché of two ships passing in the night, where you try your best with somebody to meet on the middle ground, understand what the other person is saying, and never getting there. Combined with the imagery of a ship just cranking and capsizing and falling into the water.

That one was by accident. It was written and recorded in three days, I was broke at the time, so I was trying to write a positive song about being completely deathly afraid of being broke.

That one is an amalgamation of a bunch of things. Lyrically speaking it’s me calling myself out on my old faults, things I do that I wish I didn’t with a very pretty arpeggio underneath it. You know, like if you give a really harsh, negative message but if you sugar coat it, it might go down a little easier.

This one is lyrically about me growing up in Florida. I was there from the age of eight or nine until I was about 17. Living in Florida is a very, very fucking weird place, because it’s so beyond south that it’s no longer the south of America. It’s no longer Hillbillies, it’s very Cuban, very Hispanic and half my family are Hispanic but I’m very white looking and non-athletic, so it placed me into very precarious positions growing up. I don’t know why ‘Zebrah‘ it just seemed like the right word for it. I don’t even mention it in the song – it just seemed like a nice book end.

It’s exactly what it is. It’s just very direct, there’s no metaphors, no analogies, no anecdotes. It’s just the general thought of really fucking loving somebody and just you know, “Fuck it” and not trying to be poetic about it. Almost like a toddler saying, “I want that!”

This doesn’t really have any lyrics, I just wanted a really heavy song because sometimes I really like heavy music and I wanted one for myself that I could listen to and either run or move physically to. There’s not really any meaning behind that one other than the music itself which is kind of pumping.

I can’t tell you, because I was very drunk when I wrote it! It was like 4am and a lot of wine. I was just messing around with the guitar and it just fell out and then it was literally 4am. I looked out and saw the moon and thought it looked pretty fucking dreary, and that was just it.

That’s just an instrumental song that was more of a wave, tapestry kind of thing, so it didn’t have beats to it. It doesn’t have angles or any sharp edges, so that you could listen to it to calm you. I needed something to calm me and I couldn’t find a song that did that, it’s something you can fall asleep to, which with most songs I can’t.

That’s about a very abusive relationship I was in, and she took every advantage she could to make everything into a fight, to always take it to the tenth level. And I always took the bait, I always went there with her. I don’t know if you have ever been in a relationship like that but, after a while you take a step back and you realise, “I don’t have to fucking do this.” So that’s what that song is to me. You can get really stuck in things, especially if it is a pattern, like after the third or fourth of fifth time you start to think this is normal. It wasn’t a friend or anybody else that said something to me, it was just a moment where I realised, “I’m a good person and I don’t need to do this”.

Love You this Summer

I didn’t mean to do this, but it ended up being the Kinks meets Serge Gainsbourg. I always love Ray Davies’ ability to make the simplest song so fucking heavy, as far as it’s meaning and everything and The Kinks are one of my favourite bands ever. So I was just putting that with Serge Gainsbourg string sections, especially the stuff he did with Brigitte Bardot – they were great, great string sections – so I thought it would be cool to put those together.