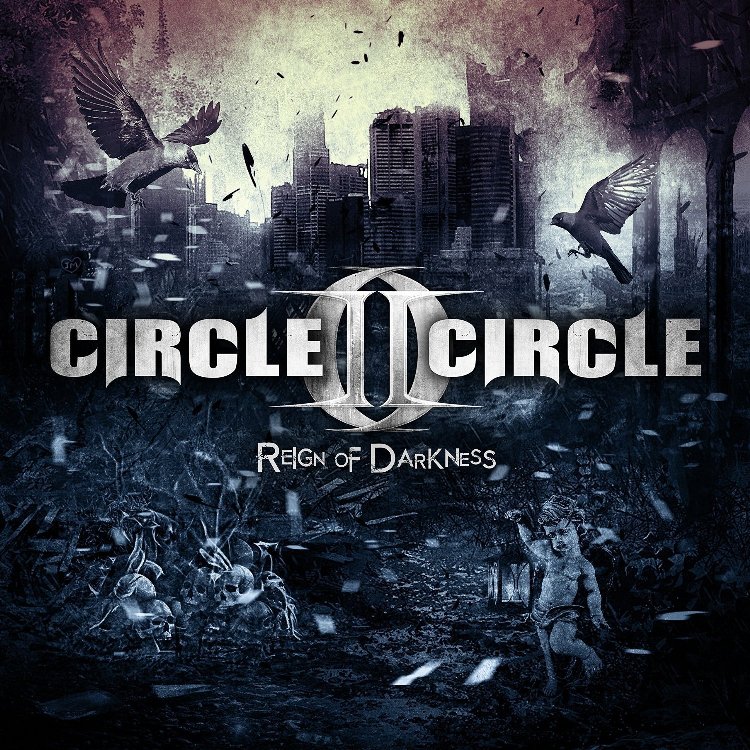 The album artwork was created by our great friend and graphic artist/CIIC website designer Joao Duarte from Sao Paulo, Brazil. He also did all the artwork and graphics for our last album. He’s a permanent member of our team. To me the artwork symbolizes the current state of the world. Of course it depicts an almost futuristic and disastrous situation, but that’s the way it is in some parts of the world right now. But the doves and the baby statue represent a peace in the midst of destruction and devastation and that’s like a dichotomy within mayhem in a way.

We have never opened a CIIC album with an instrumental track before, so we thought it might be interesting to do this and it set the mood for the rest of the album in the process. It was written by our guitarist and the producer of the album, Christian Wentz. It reminds me of a little bit of a dramatic piece paired with maybe a hint of a heavy version of a T.S.O. riff at certain points in the song. It’s very aggressive overall, especially at the end.

VICTIM OF THE NIGHT

It picks up right where “Over-Underture” leaves off, continuing the dark and aggressive mood. The lyrics in this song depict a serial killer who’s tracking and hunting his next victim to satisfy his sick desire to torture and murder innocent victims. It’s almost a warning to the victims in some of the lyrics. Most of the inspiration for writing lyrics with dark subject matter comes from my interest in TV shows about murder investigations and the application of forensic science in solving murder cases. This was one of the first songs we wrote for the album.

This song came from Christian Wentz‘ past song catalog and was a song he wrote but had never finished from a few years ago. So I got together with Christian and we finished the song. The lyrics are about a guy who is basically a fugitive running from the law because he had to kill someone in self defense but is now on the run. He no longer has the desire to continue in his past ways as a criminal or his life on the streets but it’s at a point where he has no choice but to keep running.

This is an up-tempo song initially created by Christian and our great friend Marc Pattison. I wrote the vocals and the lyrics to finish but Christian and Marc work great together coming up with great music ideas along with our bassist Mitch Stewart and this is basically the core of the songwriting group and process in CIIC right now. The lyrics are talking directly to the main character in the “Untold Dreams” and it’s told basically from an advice perspective. I really like the musical arrangement and riffs in this one because it’s upbeat and sort of fun sounding even though it has a darker mood in the verses.

This is one of my favorites on the album and the creation of Mitch Stewart, our bassist for over a decade, my partner in crime and the writer of so many great CIIC songs over the years. To me the intro sounds kind of like a Black Sabbath type riff. The verses have that same feel but with my vocal melody it gives it an entirely different vibe. The chorus is classic CIIC all the way. Anyone who has followed us for a long time would probably agree. Great job Mitch!!

GHOST OF THE DEVIL

This is the track for our first lyric video for the album. I think it’s a perfect song for Halloween. The story of the lyrics takes place on a lake where the central character of the song witnesses the ghost of the devil rising from the water. He can tell it’s a ghost of the devil because the devil appears to have died and come back as a vision or a spirit. In witnessing the ghost, the character gains special powers and the ability to have visions of the future. He also gains the power to bring the dead back to life. Unfortunately when he dies, the dead that he brought back to life will die once again but they don’t know that yet. It’s almost a vampire-like tale but don’t ask me where I come up with this kind of stuff.

This song has a very special meaning for me because it has a positive story that actually comes from something very negative. It’s about a person who has endured a sudden tragedy that changes their life forever – the loss of a loved one. However, in the long process of healing from this terrible loss, the person finds a new purpose and meaning for their lives that they would have never discovered if they had not had to go through the trauma of dealing with that loss and tragedy. I’m actually seeing this sort of thing right now in my own state of South Carolina, USA with people who have lost everything they owned in the recent terrible floods we had here related to Hurricane Joaquin. Hopefully these people here in S.C. who lost so much can find healing and relief soon so they can get on with their lives, but of course they will remember these events for the rest of their lives.

This song is interesting because the verses are very aggressive and dark but when it hits the chorus the tempo pulls way back and it opens up to a very melodic expression of an event the person has been carrying with them for a very long time that gives them a deep sense of guilt. It’s almost one of those stories where the guilt of a a secret that someone has held deep inside just starts eating at them to a point where they just can’t take it anymore.

I really like the slow beat grind that Mitch came up with on this one, especially in the verses. This song has a real cool melodic chorus and some elements that we’ve never tried before, much like many of the songs on this album. There’s a cool little keyboard break in the middle of the song right before the guitar solo section that really sets a cool mood. The guitar solo is one of my favorites on the record and a great example of the prowess of Bill Hudson, Christian Wentz, and Marc Pattison and how creative they were on this entire album with all of the guitar solos.

This song to me is a great song for a true band performance production video, so we’re going to do that with this song. The meaning is really about alternative lifestyles. As you might be able to guess from the title, it does have something to do with exploring the darker side of love and sex. This might include, but not limited to, bondage, discipline, sadism, masochism, or any other fun type of things that people get into. But I kept the lyric content kind of general so people could read into it whatever they choose to. Have fun because this song is meant to have fun with.

This song is one of the most different approaches we have ever taken in CIIC to date. It has a very deep and serious subject matter that deals with an addict who has struggles with alcohol and drug addiction for most of their life. This song is in many ways a modern day requiem. These persons are getting to a point where they are tired of relapsing and losing the battle to get clean and sober. They just can’t seem to win the battle. The subject matter is truly dark and sad in this song for sure. It actually ends the album with the lyric „Goodbye“, signifying that the person is most likely saying his final goodbye to life. It’s a sad subject but I always write lyrics to what the music says to me, and you’ll hear when you listen to it, this song has sadness written all over it. We do so many things in this song that we have never done before in any CIIC song and for that reason it’s a very important song for us and opens us up for a lot of really cool musical approaches in the future.