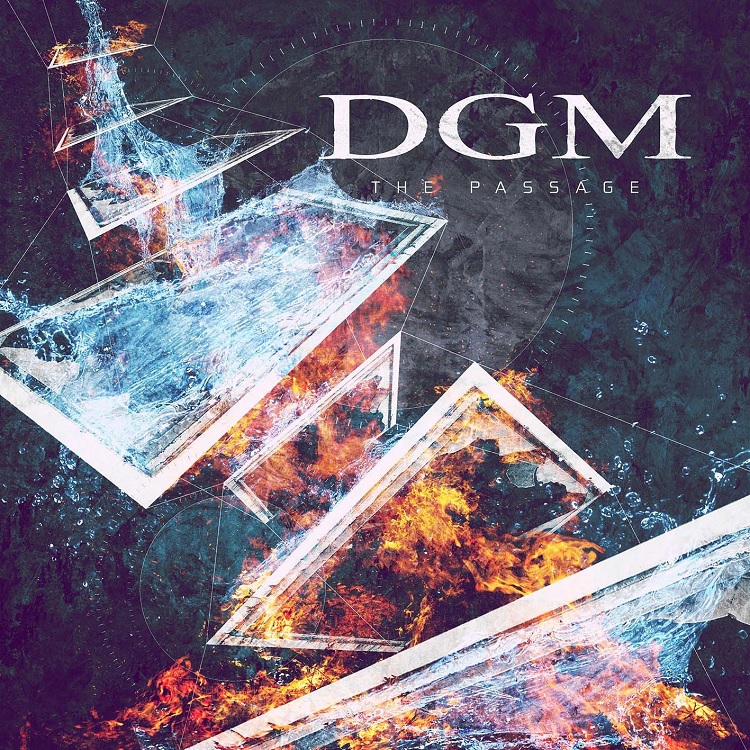 This is the first time we work with an artist outside Italy for the artwork. We searched for so long during the months before the master delivery, trying to choose the best one. We ended up loving works from Gustavo Sazes, who worked with many great bands such as Arch Enemy, Kamelot, Jeff Scott Soto and others. His style is great because he can be so versatile… from obscure stuff to proggy-dreamy style. I know it’s difficult working with us because we never give the artist an exact idea of the cover art, and we usually hope that he will translate to graphic what we have in mind. Gustavo was simply flawless: we gave him the songs and all the lyrics and the cover you see now is the exact first version that he sent to us. It’s abstract, strong but dreamy and ethereal at the same time, it really translate to paper what our music is nowadays. I’m sure we’ll work together again in the future!

This is by far the longest song we’ve ever wrote. More than 8 minutes of pure DGM. It wasn’t originally planned to be this long, it came out really naturally and it took only a few days of writing. It starts like a „standard“ DGM song, but after the usual duel solos between guitar and keyboard I decided to explore the proggiest side of the band, developing an instrumental section inspired by prog bands from the seventies like Kansas or Yes. We love play technical and intricate stuff, but we always try to remain focused on melody and musicality. Right in the middle I thought that it could be great to have a „slow“ moment with only piano and vocals. Mark has an amazing soulful voice but we usually pushed him hard all the time during the previous records. I really wanted to write an anthem of DGM, representing every aspect of the band: fast riffs and solos, but also really catchy choruses, progressive elements and strong melodies!

Right after I finished part 1, i thought I could explore even more the progressive and experimental side of our music. We never had a long mid tempo song with all these proggy elements: a start with only bass and keyboards, a strong verse with big pads only and epic, anthemic chorus. The middle instrumental section reminds me of Toto on steroids, surely a band we love. Since this song had the same tempo of part 1, we decided to „unite“ them in a single mini-suite, with same themes in the lyrics. We love to write lyrics about everyday’s life, and this time we went for a „dark“ love song. It’s not the usual Whitesnake „baby baby gimme all your loving“ (even though we LOVE Whitesnake!) since it wouldn’t fit the music, so we wrote about all the darkest feelings and sensations that happen when a relationship is goin‘ in a certain direction…

The first single of the album. I started this song thinking that we always played intricate and complex stuff, but in the end we’re constantly listening to really melodic and AOR bands every day, especially Journey for example. So I thought it was time to have a more „commercial“ song , with a super melodic chorus and a Van Halen vibe in the riffs and verses. Obviously it came out in the DGM style, so there’s still musicianship and strong arrangements. We loved this song from the beginning and our label chosed it as the first single! Lyrics talk about the animal side that everyone has inside, about the struggles of being „normal“ and „calm“ while there’s a lot of raging ghosts hiding in everyone’s soul.

First song of the album with a special guest. I started to write this song already knowing that Tom Engund would have sang it. It’s not a secret that we’re fans of his incredible voice and of Evergrey so we create a music landscape that could perfectly fit his style while maintaining our typical style. The main riff is really heavy and groovy and it suddenly transform in a super atmospheric verse with Tom singing amazingly. I wasn’t‘ so sure in the beginning about combining his voice with Mark style, since they’re so different in timbre, but they’re both great singers and we’re super happy with the result. I decided also to go for a longer guitar solo: we usually do the keyboards and guitars duel thing, but this time I wanted to create a sort of long guitar statement so the solo starts super dramatic and suspended, and it becomes faster as it develops.

This is the typical fast & in-your-face DGM song. We love to push the speed from time to time and this song is a typical example of that. The first two riffs are strongly influenced by thrash bands like Testament but right after those the verse bring us back to hard rock and melodic metal shores. We tried this time to go for a typical power metal chorus but with slightly different melodies, combining typical power chord progressions with more bluesy vocals. I guess this one will be killer during our live sets, and it represents pretty much all our heavy influences: thrash riffs, power metal runs and hard rock flashes.

The title track was the first song I wrote for this album. Originally it had a 2 minutes intro that we cut right after the final mix. I love the main riff since it’s way different from everything we’ve done in the past, and reminds me a little bit of Gojira somehow. As we do in many songs, we like to mix up really diverse influences, so right after the super heavy and obsessive riff it starts a cool melodic and groovy verse, with typical DGM chord progressions. The choruses are somehow AOR’s influenced, and so anthemic. Being a progressive band means also to experiment new aspects and push the limits a little bit harder: that’s why we choosed to slow down tempo and atmosphere when the solo section shows up. We’re not only playing ten million of notes per second so we wanted to show our more soft and tasteful side. This is one of the few songs I wrote lyrics for: it’s a cry for help for mankind, about the bad auto-destructive behaviour that humanity embraced especially in the last centuries.

We thought that it was about the time to show once again our softer side. Instead of writing a typical and usual power ballad, we went minimal creating a short break of piano and vocals only. Really intimate song, melodies and lyrics. This song marks the end of the first „half“ of the record and give the listener a few minutes to take some breath before going back to the heavy stuff.

PORTRAIT
This song started from the intricate guitar riff of the beginning. It alternates different time signatures throughout the whole structure but it always remains melodic. Chorus is once again super catchy and instrumental and solo section are probably the most technical that you’ll find in the record. Together with the song „Dogma“ this is probably the more „in your face“ song of the album.

One of my favourite of the whole record. We wanted to create a super epic chorus, with simple rhythm and chords but catchy like hell with dramatic melodies. It really shows our diverse sides: during the riffs and verses it’s bluesy and groovy, reminding a little bit of Winery Dogs for example, while in the pre-chorus and chorus it transforms in a dramatic and soaring chorus that will stick in your mind instantly. Our main goal in every song is trying to combine really diverse styles in a single song, trying to maintain our main style intact. A few years ago we would never have risked so much in trying to mix basically a funky/blues riff together with a so sad and dramatic refrain: but we feel we are now pretty mature as musicians to try out this kind of things. We love our artistic freedom and if the song works, why not?

Another up tempo track that features Michael Romeo of Symphony X on the guitar solo. It starts with an heavy and fast riff, probably the most Symphony X influenced of the whole album. We tried to write an heavy verse too, and Mark sang a little bit different on this one, more raw and aggressive. In the chorus we come back to power metal style and I think this one gives a sort of „breath“ after 2 minutes of fast riffs and double kick madness. I remember when I arrived at the solo section and I thought: „ok, I should play in Romeo’s style here, since it’s so Symphony X sounding this one….“ and after noodling around for a few minutes i thought that it could be great to have the „original“ instead of copying him eheheh… So i picked up the phone and asked Mike if he would like to play on the song, and here we are! Incredible stuff goin‘ on in the solo, he really shines on this one and his trademarks licks give the song a strong credibility.

Following the idea of not putting a standard power ballad in this album, I sat down together with Mark and we created this little piece of music starting from an acoustic idea he already had in mind. It’s once again so intimate and melodic, and it features a few things we never tried before: electronic drums, different guitar sounds and an overall ethereal soundscape. We thought it was the perfect way to close the record, after almost an hour of madness, this calms the waters and guide the listener towards the end.