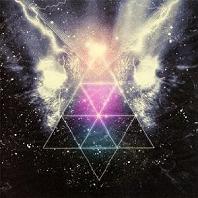 WE ARE THE DEAD

This track is a good barometer for the album, it’s quite schizophrenic and mixes both sides of our personality as a band. At one point you will have acoustic guitars followed by crazy snarling synths. We put this tune first as a good indication of what’s on the rest of the album.

This is probably one of my favourite tunes on the album, the guitar solo does it for me. For this track we recorded lots of strange noises like music being played through A Hoover and using a tiny cigarette box amplifier.

PULL OUT MY INSIDES

This was written and recorded in Brooklyn when we went for a mixing session. It’s probably the most conventional song on the album, but it also is a nice pop track with a nod to The Cure.

This track was a headache to make. We asked our fans to send in a recording of them shouting „yeah“ to our website and then also recorded them at our gig in Manchester. We took everything back to the studio and recorded lots of clips of us playing down to tape and then cut it up and spliced it back together in different orders till we got a pretty insane track.

THE MONKEYS ARE COMING

This track has a kind of Nirvana type riff which got written but we had a hard time fitting it together to make a hook, until we took a break and were just browsing YouTube. Then we found a great speech by some dude on the streets of America, he does this amazing wild speech and we knew we had to use it!

Some people would think this song is about drugs but it really is about the early Gemini space missions. We’re big fans of stuff space related and even met a NASA astronaut when we played in Florida this year.

This song has a sample from the film „Beyond the Matt“ which was directed by Barry Blaistein. To get the sample of wrestling promoter Paul Heyman doing his speech cleared I had to find Barry on Facebook and ask for his permission to use it. It turned out he was a really nice guy and he came to one of our gigs in Hollywood.

This track features a good friend of ours, Trip. He is an amazing rapper and has won many jump up rap battle tournaments in the UK. We used to put on club nights with him, and the vocal take we used was actually recorded years ago!

This track features guest vocals from The Pipettes, we tried to make what we thought Talking Heads would have sounded like if they were playing a gig in a club in the Bladerunner universe. Whilst working on this track we also had the film „The Dark Crystal“ on repeat on the TV.

This track was the first one we wrote for the new album, we wanted to do something that people would have never expected us to do, so we made a ballad. This got the creative juices flowing and enabled us to get in the mood to write new tracks.