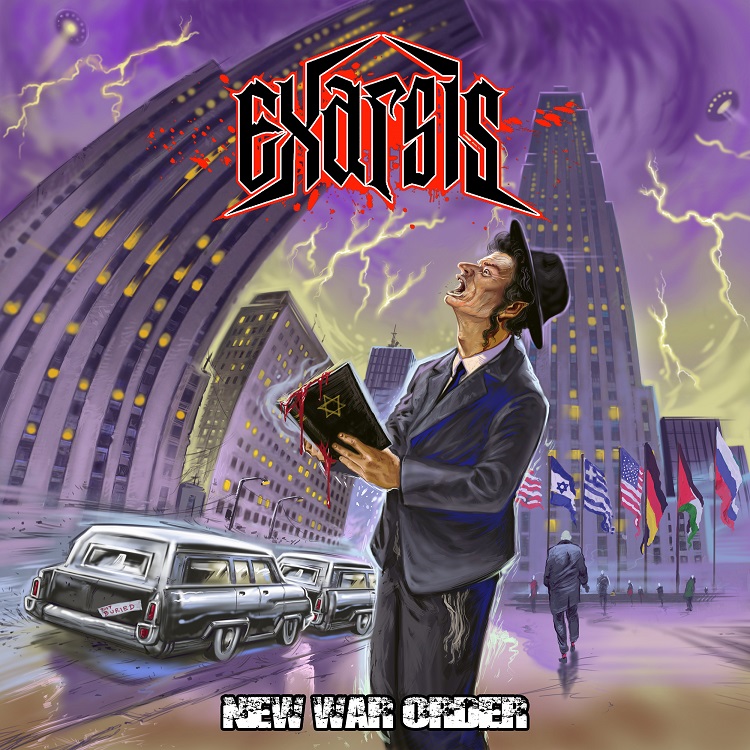 Some of this record’s lyrics dabble with religion and politics. So we wanted to make a comment on holy wars with our new artwork. The main reason we chose to talk about this stuff was the Israel-Palestine wars and how beliefs such as Zionism or religion divide people while people were supposed to be united, no matter the colour of their skin or where they come from. It’s an anti-racism comment. On the one side we see flags of countries that have been through holy wars or are victims of conspiracies of the New World Order as the Economic Crisis. Hence the title and the building behind the flags. In the center there’s a Rabbi holding a Talmud book dripping blood, and that’s how we shout that religion brings death and misery instead of the unity and love that preaches. The Rabbi is our mascot actually, the Politician, who appears on all of our record sleeves. That’s why there is a hearse car there, bearing one of our new songtitles, “Just Buried”. No, we do not hate the people of Israel, you smartasses. As for the UFO’s in the sky, well, it’s an Illuminati thing. You better read our lyrics for that. We received a lot of negativity and hatred by people on the internet, as well as by people from magazines, radio stations and websites. To us, that’s muzzling of freedom of speech, since we’ve made statements on our Facebook page of what’s the artwork all about and as a band we are openly fully against racism, nazism, anti-Semitism and politics. Metal is supposed to be open-minded and criticize everything that’s not right in this world and that’s what we do. Our message is to open your eyes and see who controls the media and the rest of this world, and we will never stop doing this. I’m afraid that even metalheads have been too politically correct and see “ghosts” and enemies everywhere. We are artists, not your enemy. Metal will never die because hates political correctness. Because it’s against the people who control, against discipline and conservatism. Powers that be will never win.

Holy wars are History’s greatest conspiracy. People die for a fictional idea, how fucked up is that? Religions were supposed to unite people, not kill people, right? “Killing for religion, something I don’t understand” the great Dave Mustaine wondered once, and we 100% echo that. It’s a twisted logic really. So, this song is based on that, and it focuses on the young people dying for a divine concept and a nation that turns into a monster of itself (the “abomination of a nation” line) while on war. The artwork feeds off this song, as our main influence to write such a track were the Israeli-Palestinian wars. As for the gentleman you hear on the intro of the song, that’s David Icke, the world’s greatest conspiracy theory book writer.

Musically, the intro is a mid-pace affair of what Exarsis usually do, it’s like a call to arms if you like, but things speed up properly as soon as “Twisted Logic” kicks in. It definitely sets the more melodic scene of the brand new record, both on vocals and lead guitar. Welcome the new Exarsis.

It’s not a theory but a fact that secret masonic groups and sects hide underground. People gather down there, plan our future and perform rituals. Sometimes they do decide to abduct people who talk too much and we won’t see again. Who knows, we might be those victims someday as people try to stop us talkin’ already.

That’s the first single of the record, and John Kaimakamis made a wonderful lyric video for it. He totally got it. It’s a thrash metal anthem, a song we love performing live because the fans have an important part in it. A live stable that is here to stay! Plus it gives theatrical possibilities for future live shows which we might take advantage of someday.

School as a nursery for malleable minds; the children. They teach us about religious non-sense, they teach us about History the way they want us to know it, they teach the nation’s people to hate each other since a very young age. We are like sheep, driven to a direction decided by the powers that be.

That’s the first video-clip of the new album, directed by Athina Tousia who did “Skull and Bones” off the previous album as well. We shot the band’s performance on a great Athenian mountain, Parnitha, at a place called the Park of the Souls, as it is across an old mental asylum. It’s a spooky place. The video has a John Carpenter thing going on, namely “They Live”, as we used elements of the next song’s theme, “Just Buried”, with TV manipulation and stuff but, hey, we sing about that stuff all the time. This young kid in the video is taught to consume and pay attention to nothing else.

Television creates a bubble. Yes, I know that we live in the Internet era and computers and i-pads are the new TV, but the actual TV is still a pretty strong medium, if not the strongest. So, it does remain a powerful tool for the powers that be to turn our heads the other way around, forget about the real problems and fill our heads with sports, reality shows, fashion and consumerism. Plus TV was instrumental in creating a likeable image for neo-Nazi political parties during this decade, especially here in Greece.

That’s a heavy song, both musically and lyrically, no doubt about it. Some parts of it have a death metal vibe which is always welcome in Exarsis’ music. It’s not one of our fastest, I’ll tell you, but it transmits such energy that makes “Just Buried” a must for our live shows. Its vocal melodies are unique and somehow cathartic. The song’s pace helps my voice to use more melodic lines, and that’s one of the key elements that make the “New War Order” album stand out.

“Chaos Creation” it’s the mid-paced intro to “Prophet for Profit”. It’s we against organized religion again, and this song aims at the preachers that appear on TV. Ιt touches on two things: religion as a product for sale, as business, and the dirty deeds of the men of the cloth, such as sexual abuse. In addition, the song’s message urges people to wake the fuck up and react, because religion in countries like Greece is an institution that’s an untouchable thing for millions of Christian Orthodox believers. It’s a shame.

Another song that gives me the space to sing the melody I want to. The chorus is quite melodic, I don’t think we’ve tried like that before. I love the mosh part (even the gang vocals shout “MOSH!”) and the verse prior to the last chorus has one of my favorite vocal lines since I joined the band – the end of that verse gets super high in the end! Great song, can’t wait to do it live.

This one has to do with a vicious card game totally linked to the Illuminati. It’s a funny way of them to express their next targets, what’s the next disaster gonna be. It happened with the Twin Towers in NY and the great tsunamis in Asia. One of their next moves is the 2018 World Cup in Russia and the Olympic Games in Tokyo in 2020 – as there’s a card with the Ginza Wako clock tower that looks like the Big Ben in London. We’ll see what happens. But don’t tell us we didn’t warn you.

This song is totally different to what we have tried before. It’s the simplest and most melodic Exarsis song so far, it’s verse-chorus-verse-chorus and no gang vocals at all! In addition, there’s a melancholic vibe to the vocal lines that I really like, hence the Solitude Aeturnus lyric in the second line of the track. I would like to use more of that stuff on our next record. We’ve got four brand new songs at the moment, by the way.

This one is dedicated to the satellites and the antennas used by the U.S. Army and Government in order to and study and exploit the ionosphere. But, in reality, that’s a secret weapon that controls and tries to exploit the human mind through frequencies. You didn’t see that comin’, did ya?

We opened our shows during the Onslaught/Artillery tour with this one. It’s of the aggressive tunes of the new album, so it made sense to be our opener. It borrows some elements of the “Toxic Terror” single two records back, like the first line (“Weather control achieved already”) and the first riff of “Toxic Terror” which is “HAARP Weapon”s last. Great track, it will be a live stable for sure.

As you can see, every last song of any Exarsis song has the title of the previous record. So you already know something about our next album. In light of that, the lyrics are a loose verification of what “happened” to the predecessor of the record now playing. The message, the bottom line to all this is that what we have to do as the human race is react, refuse and resist. Recently we read about the greatest social experiment of all time, where 10,000 will let scientists to wire and watch their houses in true Big Brother spirit and record everything they do: what they eat, when do they leave their home, what they eat, what kind of music they listen to – everything. And what’s the title of the project? “The Human Project”! Geddit?

The longest and most ambitious Exarsis song written to date. Tons of ideas, riffs, lyrics and melodies, that song is the A-to-Z of what this band is all about. It’s got an Iron Maiden guitar harmony that, to me, is the record’s highlight. It’s got variety but we didn’t try anything that’s not us -like a slow part- so we think that’s a success. We made the next step. Stay tuned for more. And thanks for the interview.