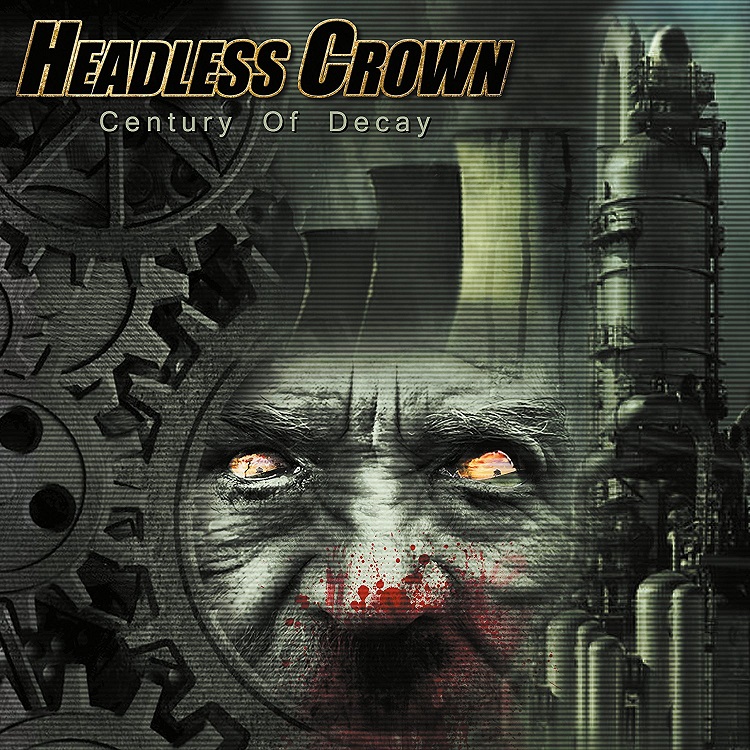 Our second album wasn’t meant to be a concept album at the beggining, but after writing the lyrics for the first four or five songs, the same distopian/futurist topic was coming back, and a concept album came to my mind. The songs were darker than on our first album, and suited the topic, so I had to change lyrics and titles for two songs, but before that, we had to choose the order of the songs, they were composed, but most had no lyrics yet, so I could write the whole story, and cut it , as it is the case here, in 11 pieces, so I had to work like if I was writing a movie script, which meant that every time I had a new idea, it changed the story line, so I had to rewrite. It was a lot of work, more than three months in all, but I loved it, being a movies and books freak, it felt good to soak in there, hoping that my work would be good enough, but that’s for you to judge… In a nutshell, it’s the story of an anonymous worker, in a monstrous factory the size of a big city, in a grey,rainy, over polluted distopian world, lead by “The State“, his only peaceful and free moments are in his dreams, where he can escape, in a non physical world, and him being at the end of his rope, he plans to escape there forever, but “The State“ is watching. My influences are to be found in classic movies/books like, “1984“ “Brazil“ “ “THX 1138“and the cult Sixites UK TV series “The Prisoner“. The most frustrating thing in the end, is to be limited by the number of words you can put in a song, so I had to leave out lots of ideas, but who knows, I might turn it into a novel or short story someday…

From the moment I heard the song I knew it could be an album opener, it has this powerful beginning, makes me think a bit about Priest, Manu is a great composer, and I rarely have trouble finding a vocal line on his riffs, and this one came pretty quick, there’s also an epic moment in the middle of the song, that gives me goose bumps. Lyrically, it lays the atmosphere of the whole story, describe the city the story’s in, I had the “Blade Runner“ /“ 1984″ kind of esthetics in mind.

A solid mid tempo, starts pretty melodic, then the atmosphere changes and becomes darker, a constant in this album, an emotionnal roller coaster if I may dare say, the end is quiet enraged. It’s one of the songs I had to rewrite the lyrics to and change the title, it was originally called “Sign and Obey“. Here the story begins, with our unnamed character, that we’ll name “the worker“ who wakes up for a day in factory city.

A dark song, the atmosphere is heavy and a desperate feeling sticks like a bad smell. There’s a great twin guitar attack and a powerful solo. Being a big NIN fan, my vocal inspiration on this one came from Trent Reznor, kind of…
Our worker is in the factory, suffering, being over medicated to be productive, but he feels he’s about to crack.

A quiet energetic song, incisive riffs, a great bass/drums bridge that leads to a heavy and dark part. The verses are challenging to sing, lyrically, it’s where the influence of “The Prisoner“ is more obvious, it’s a rebellion speach against “The State“, where the line “My life is my own“ takes all it’s sense.

Starting with the bass, it’s very cold neverending riff machine, a mid tempo that crushes everything in its way, I sing lower on this one, and tried to reflect a cold feeling, makes me think a bit of the song “Antechrist Supertar“ by Marilyn Manson. Here “The State“ is speaking, arrogant and violent, note the contrast of the melodic chorus and the harsh lyrics, in the most ironic way possible…

I remember when we choosed the songs for the album, we listened to the ones that were selected months ago, and when this one came up I said, “mmh i’m not sure“ I didn’t see how I could sing “metal“ on thoses verses, then, when the concept came in the picture, I changed my approach and thought about a Marilyn Manson atmosphere that would fit the story, i’m also a big fan of his work, and it allowed me to sing differently, I liked it a lot. It’s more about interpreting than singing the verses, I had to put myself in the right mood to get what I was after. Also challenging to sing in général, quiet some very different parts and different registers. It’s difficult to describe, I say it’s an atmospheric song, because it has some drastic mood changes in it, from creepy verses to a chorus with classic heavy metal riffs, you ad a heavy bridge, and you have quiet a journey here. The song title is a tribute to “Plan 9 From Outer Space“ of the legendary movie director Ed Wood. Here is the part of the story where The Worker elaborates his plan to escape to his world.

A soon as I heard the beginning, I thought about David Bowie, i’m not very familiar with all of his work, but I always loved his voice, and I was driven to sing a bit in his way, at least that’s how I hear it in my head when I sing the intro and the bridge, after Plan 9, it ends this atmospheric cycle. Otherwise, it’s a complete metal song, big riffs, and kick ass drums, a great guitar solo, and a twist in the mood in the middle of the song, like in some David Lynch movie, one of my fav directors. The Worker is enjoying his time in his dream world and wonders if it’s as real as he feels it is.

Our fastest song , we can’t wait to play it live, it’s a headlbanging symphony, quiet simple in structures compared to some other songs, with a melodic chorus and a very dark and heavy ending. He’s taking a drastic decision in order to leave defintely for his dream world…

THE EYES OF THE CROW

The first song that was written for this album, it’s very heavy and powerful, with a nice melodic bridge, I love to sing this one, I feel a mystic atmosphere here, another one to headbang to! I had to change the lyrics to fit the story, but the title and the topic stayed the same, I was watching the Game of Thrones serie at the time of writing, and always liked ravens and crows, and felt that it could very well portray the fact of travelling to another world.

THE MANIPULATORS OF DREAMS

This one makes me think a bit of Queensrÿche, Operation Mindcrime era, I also sing lower on verses, there’s a great chord progressionthat leads to the solo, the chorus is very melodic and catchy. That’s where our friend realises that all that his been through was a manipulation of “The State“ since the beggining.

The title is a tribute to an episode of “The Prisoner“ , those who are familiar with the TV series knows what I’m talking about. It’s a powerful song, full of hate and desperation, because the worker knows he’s going to suffer greatly for his rebellion against “The State“, I love the guitar melodies that leads to the end of the song. We wanted to finish the album with power, and hopefully, to give people the urge to push play again.