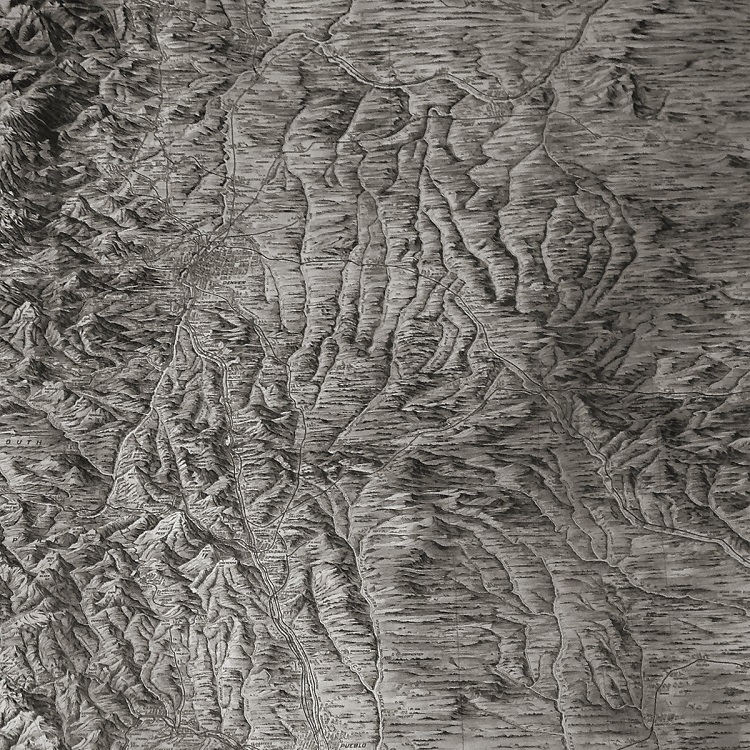 Peter is a friend of Scott’s from London and when we finished Cinderland and were thinking about someone to help with the cover art, he immediately came to mind.  There was a Low cover he designed that we really admired and we were curious what he would come up with for our cover.  We sent him the mixes of the record and he came back with these images of Colorado that really matched the stripped back nature of the music.   We wanted something that conveyed not just the landscape but the landscape through a certain lens.  Something about the combination of the old, hand drawn topographical map combined with more modern aerial photographs struck a chord for us.

I knew a little bit about the location of the recording in Wyoming, Scott sent me a photograph of the ranch where he and Mark recorded. The first few listens I had of the record it struck me how open space-wise it was, a good balance of light and dark. In my mind the cover had to evoke some of that space, both present in the record and the actual location of the recording; I lived in Montana when I was younger and have an innate understanding and feel for the space of the landscape in Scott’s photograph, it’s endlessly captivating, always present in a recess of my mind. The unrelenting open plains, enticing yet untouchable, there always is, especially in winter, equal intrigue and foreboding. The cover is a photograph taken of a map of the rockies I took in an emergency shelter/ski patrol hut on top of a mountain in Colorado, the map was originally printed by James McConnell for schools. It is an accurate mapping of the area; mining camps, towns, rivers and mountains, originally printed in 1894. The inner is taken from a plane window flying over the mountains of the cover map at the point where they meet the plains. It’s printed on the reverse of the card which gives it a matt-flat depth. It is very important to me that the cover compliments the music, to be part of the record and be in balance but taking a quiet backseat. I hope that I achieved that.

On a personal note, I have played this record relentlessly in the studio since making the cover, it is endlessly rewarding, it is a real gift to be asked to be part of it.