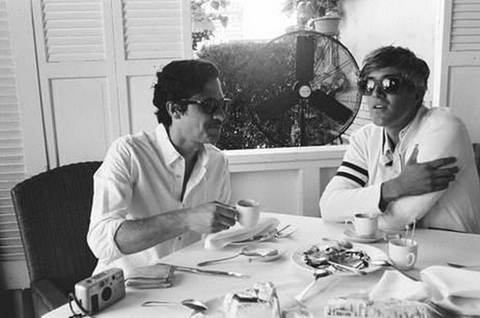 Popmonitor: So, this is not your first time in Berlin?

Chris: No fucking way, we’re old hand. We know Friedrichshain because we played at Postbahnhof a couple of times, and we know the six-block stretch in Kreuzberg near where Festsaal used to be. We’ve been to Potsdamer Platz to watch a movie and get a couple of big beers and also to the Holocaust Memorial, which was definitely horrible but in a good way. It’s incredible and had a massive impact.

Chris: Also the Tiergarten and the Reichstag…so we got around a little bit. We like it a lot. We’re moving here probably next month…I just decided…I haven’t told him yet! What do you think?

Keith: Yeah sure, that’s not a problem!

Popmonitor: Where are you looking forward to playing on the upcoming tour?

Chris: We’re doing four shows in Spain which we really love. We’ve also spent a fair amount of time in Germany, it’s the place we have toured most next to England and we still love coming – England is starting to wear thin. We get a good response in Germany.

Popmonitor: How are you feeling about the album?

Keith: Mmmm…yeah, we are really excited!

Popmonitor: Can you tell me a little bit about the title?

Keith: Well, essentially, the lyrics largely refer to gaps that occur when it comes to communication between romantic partners. We saw the title TV en Français painted on the wall of a hotel and we then applied it to this theme. Having a conversation in a relationship can often be like watching television in a foreign language, during which time you can essentially understand what is being presented to you, but occasionally a fundamental piece of information is obscured.

Popmonitor: Are there any personal aspects behind the name?

Keith: In retrospect it made a lot of sense. The album was written immediately after a long relationship I had been in, that had magnificently fallen apart. It sort of feels like a break-up record without the actual royal embitterment that tends to be part of that genre of music.

Popmonitor: Are there any major stylistic changes in comparison to previous albums?

Chris: Nobody would say this is a left turn, but there is a progression. I think our records have generally progressed pretty coherently – In the sense that it all sounds like We Are Scientists, but more and more in that it becomes our own sound, as opposed to a reflection of a style of music that is happening at the time. I think our first record fitted neatly into a dance-rock genre that was happening around 2005, but we have very steadily done our We Are Scientists thing without reference to the way music has generally progressed. So this record sounds the most out of place – not in a bad way, but it is definitely its own record.

Popmonitor: So there are not any notable influences?

Keith: Not really. I think that is another thing that is really changing about the way we write music. On the first album you can definitely pinpoint what we were listening to, and on the second album I can remember listening to songs and saying, ‘I want to do something like that.’ But with the last two albums it’s been different. I feel like these days the art that is most creatively inspiring to me often isn’t music. I spend a lot of time feeling like literature and film, which I have always loved, have been making me want to make music more than music itself.

Popmonitor: Are you reading or watching anything specific at the moment?

Keith: I’ve only recently gotten into Graham Greene – that’s the only new thing in the past year that I have discovered that I cannot imagine not having read before.

Popmonitor: Your website seems a really good insight into your sense of humor…have you considered pursuing comedy?

Chris: I think we have always thought of the website and videos as another opportunity to do something creative, not just as a necessary way to promote the music. I would have thought that this would have been a more common idea for other bands, so it doesn’t seem strange to us. I think presumably it will also give fans a little bit more of an attachment to us, unless it offends them, in which case it chases them away! [Laughs]

Popmonitor: And I read your article about Katy Perry, did you enjoy her concert?

Chris: It was an amazing concert!

Keith: We loved it! It felt like going to an exceptional Broadway musical. A musical that lacked the goofy antiquity of your standard musical, I find. It’s just that the advertisements I have seen for Kinky Boots or Jersey Boys recently are more like something I would of gone to see with my parents in the 80s…

Chris: I bet you went to see Spiderman?

Keith: Oh God! Have you heard about this? It’s a famous disaster. U2 wrote the music and it’s awful! But the whole production was an utter catastrophe, Spiderman kept getting injured!

Chris: It was apparently the most expensive musical ever. It just closed last month, finally! [Laughs]

Popmonitor: Were you fans of Katy before the concert?

Keith: I think I thought that her song writing team were great at writing pop songs, but I don’t think I had really digested her. And we only went because a friend of ours plays in her band, but I definitely walked away a big fan!

Popmonitor: When it came to writing TV en Français, was your creative process the same as with previous albums?

Keith: Well, for the first time we had an idea of what we wanted the album to be. We have never been a band to sit down and talk about what kind of item we should create. So we tried it this time and it worked out poorly. We decided that we wanted to make like a 90s college rock album – kind of like Lemon Heads or Ian Dinosaur Junior kind of stuff – and we wrote about half an album like that and we liked the songs, but it didn’t feel right. So we threw out all those songs except for one. As soon as we started writing again without an agenda it immediately felt more sincere. So I think the agenda became abandoning the agenda.

Dumb Luck OFFICIAL video from We Are Scientists on Vimeo.

Popmonitor: Are there any stories behind the tracks?

Chris: There’s a song called “Sprinkles” that has a very distinctive guitar and bass line going through the verses, and our long-term sound guy and tour manager calls the song “Scooby Doo” because of the way he sings it! [Laughs]

Popmonitor: How about the track, “What you do best”?

Keith: It’s sort of just about failing to communicate at all and agreeing that the best course of action is not to attempt to even wrangle an issue. I’m trying to think if there’s anything interesting about it musically, or notable…

Chris: Or even good…

Keith: Yeah, should that song be on there? [Laughs]

Popmonitor: What do you guys do best?

Chris: Yeah if you do one thing with We Are Scientists make it breakfast. We are really pleasant to have at the breakfast table.

Keith: Or attend unworthy films, we are really good at that.

Chris: Yeah, if you are going to to see a pile of shit movie you definitely want to do it with us. It will be a little more fun.

Keith: And we make it happen – lots of people talk about seeing these movies, but they never go. We do it! And then we have drinks afterwards!

Keith: It’s indefensible, it’s not even that we can say we like them. It’s a continuous hope within us, that that crappy film is going to be the crappy film.

Chris: Because when those movies work, which happens about once a year, they are the best. Low ambition but high realisation is a really perfect thing. That’s the best thing I think.

Popmonitor: Can you tell me a little about the “Dumb Luck” video?

Chris: It got out of hand. It was basically inspired by wanting to do those cheap crappy special effects, on ourselves, obviously. Most of our videos are based around us wanting to do something, like getting a bottle broken over our heads…we always wanted to be lit on fire…

Keith: That’s the one thing they won’t let us do!!

Chris: Yeah, it’s a legal issue. If a label pays then they could get in trouble if we die! Laughs

Popmonitor: If there was one thing you could achieve with this album, what would it be?

Chris: I would love it if it helped people get in shape. It’s a good album to listen to at the gym, rowing a boat, sailing…

Keith: I would like to change the face of sailing with this album!