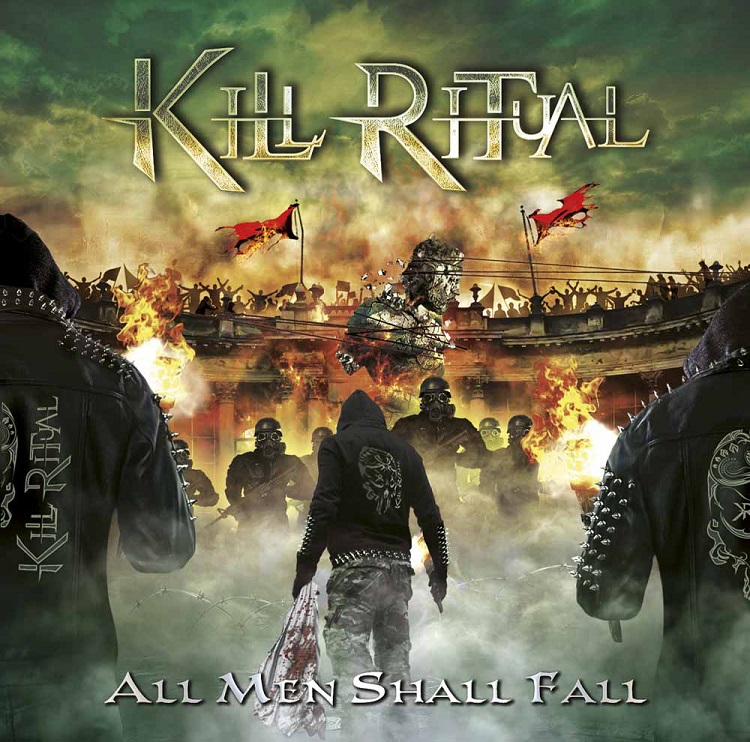 Steven (D. Rice, Gitarrist, Anm. d. Red.) and I decided that we wanted to make this follow up to Karma Machine a little bit different. Karma Machine was still in the ‘thrash’ vein, so with All Men Shall Fall, we wanted to start focusing more on the Power Metal side of the metal genre. We don’t want to get pigeon-holed into one genre just because we’re part of the Bay Area history. Steven thought of the concept for All Men Shall Fall. He named the title of the album and then handed me the reins. Following along with the basic theme, I decided to write about some of man’s shortcomings: addiction, depression, lust, narcissism, faith, hopelessness…

This is a great intro to the album that Steven came up with. The voice that you hear is Steven himself. Giving the start of the album a kind of ethereal, sinister introduction to the next song.

I live in Las Vegas; Sin City. I tell anybody that is thinking of moving here, if they have an addiction this is not the place for you. It’s very easy to get caught up in it all. Right about the time I was writing this, a friend of mine was going through a divorce. His wife started using meth and it just became really ugly and it hit home with me because my brother has been battling addiction most of his life. Do I believe these people are evil? Not at all. They’ve made some bad choices and unfortunately it ends up being a life-long battle.

ALL MEN SHALL FALL

This is the title track to the album. I wanted people to know that even if they do make a bad choice in life, they have the means to change, to leave that in their past. One of my pet peeves with Alcoholics Anonymous is that even though these people don’t drink anymore, they are still tethered to it. Nobody knows that I used to smoke cigarettes (until now). I don’t consider myself an ‘ex’ smoker. I just don’t smoke. See the difference? I use the lyric ‘Consequences equal Compromise’ because we have a tendency to hang on to old stuff, when the truth is that we can let it go. We are not who we were, nor should we have to live in our past. Families have a tendency to never forget what we did 20, 30 or even 40 years ago. It’s not a fair way to live our lives in this kind of judgement.

This one might piss a lot of people off, or it might end up becoming a battle cry. Here in the United States we have politicians who lie to our faces and for some reason, I will probably never understand, people follow them! The general consensus is that all politicians are corrupt and that to get up to their level, there are payoffs, bribes, etc. to get even higher. Knowing this, you would think that we would put an end to this, but we don’t. We just watch our TV shows, go to work, church, pay our taxes, then hope that something will change instead of, as Gandhi stated, “Be the change you wish to see in the world.”

I’ve always struggled with religion. I’ve always thought of it as a crutch, like AA, that I mentioned above. Years ago I was dating someone and her father used to sit in a chair in the living room with a beer in his hand watching the Catholic channel. I liked the guy, but I thought it odd and hypocritical. I consider all religions hypocritical. If Jesus really was the Son of God, then his followers should really start to pay attention to his teachings. As Rage Against the Machine once stated, ‘Killing in the Name of…’, I’m a firm believer that if people started taking responsibilities for themselves instead of hiding behind the mask of religion, we’d have a much more peaceful world. I end the song by saying, ‘Save your own soul’.

Once you get to the point in your life where you think you are doing the right thing, what society deems as ‘responsible’, just to end up depressed and broke, you start to question it all. I’ve lived this. Once I started doing what I love, and not what others told me I ‘should’ be doing, I became happier. Imagine if everybody did this. It’s possible. Again, I end on a hopeful note, ‘You are a star. Shine bright your light.’

DEAD MAN ON THE WATER

Steven barely ever writes lyrics. I’m not sure why. Possibly it’s the fact that he does everything else and has to leave something for me to do? Haha. Regardless, he’s a great lyricist. He wrote this entire song. I just tweaked it here and there. He wrote this song about Jesus. Another bash on the institution of religion. I love the line “Pale Ghost on the water, did we push you in?” Meaning, if Jesus really was who we have been told he was, how much of his demise was because we weren’t hearing what we wanted to hear? It seems that we always kill our leaders. Martin Luther King, John Fitzgerald Kennedy and John Lennon. The list is endless.

I have always felt for the Native Americans. These people have been lied to, killed, cheated, humiliated and I’m ashamed as an American for what we’ve done. When the Standing Rock incident started making national news it caught my attention right away. It sickened me that big oil can just bully whomever they please just because they have the money There is a translation error in this saying; Money is the root of all evil. The LOVE of money is the root of all evil.

This is another one I wrote for the Native Americans. ‘500 years you’ve tried to kill us off and take our country. Your law = Genocide.’ Who gave us the right to do this to others? I imagine this song being sung by a great Chief, possibly Sitting Bull singing an epitaph to Ulysses S. Grant.

This was written for my partner, the love of my life. Her initials are KG and her sister nicknamed her ‘Kage’ She came into my life when I was ready to receive someone. Prior to meeting her I was single for four years. I needed to get to know who David Reed Watson was, and once I felt this confidence, she came along. A lot of people search for their soul mate not realizing that they will show up when you are ready. You can’t have what you are not.