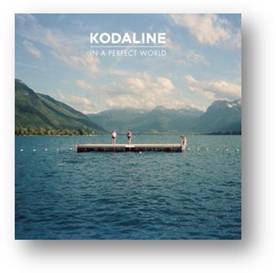 Currently battling it out for the number one spot on this week’s Official UK Album Chart, Irish foursome Kodaline present their long awaited debut album ‘In A Perfect World’. Brimming with belting lyrics, melodies and emotion it is, quite simply, music to make you feel alive. Here are exclusive comments from all four members, Stephen Garrigan, Mark Prendergast, Vinny May and Jason Boland…

We just thought it worked really well as a first track and I suppose it’s about losing someone, but also being positive. It’s like High Hopes. (Laughs) That’s very much an underlying theme throughout the whole album. Hence the name, you know, In a Perfect World. (Stephen)

Pretty much sums up the album right? Done. (Laughs) (Mark)

This was the first thing we put up – well it’s out first single – and we just loved the song so we put it on the album too. We made a really cool video for it, which has done a lot for us, the song has gotten a lot further I think, being on YouTube. It’s the one everyone knows at the moment. (Mark)

Well I was dumped, so I wrote a song about it. So being dumped isn’t always that bad. (Laughs) Yeah, well I don’t think she has even heard the song, because she lives in Hong Kong or something. (Stephen)

The Internet though…haven’t they got free Wifi in Hong Kong? (Laughs) (Mark)

I haven’t spoken to her in a long time, but yeah that’s what it was about. In the studio we put the music in and it just came together really cool because it captured exactly how I felt at that time and the lads played off that. Because we know each other so well, they kind of new what I was going through, so they could relate to it in terms of playing and being emotive. (Stephen)

This has a real Irish kind of sound, it’s driven by a mandolin, acoustic guitar and harmonica and just lots of acoustic instruments. We just had a lot of fun. It has a very summer vibe, potentially a single one day. (Mark)

We were in my house in Dublin and I found an old mandolin in my house, so I just picked it up and we wrote that song. It’s kind of about relationships, like you are getting somewhere but it’s kind of like a fling and it’s not really going anywhere, but you just go with it anyway. (Stephen)

It’s a song that funnily enough, I know it sounds stupid, but do you know that book, The Secret? It’s by an author called Rhonda Byrne. The only thing I took from it was that positive thinking is the most powerful thing in the world. When everything is going really bad the best thing you can do is think positive, it’s pretty old that song, one of the oldest. (Stephen)

But it still feels fresh. We re-recorded it when we did the album and it still really excited us to play it. (Vinny)

Is probably the most uplifting sounding song. (Mark)

It’s quite chilled out. Mark and I were sitting in his back garden and it was sunny out so we wanted to write something that you can just listen to when it’s sunny outside and just chill. It turned out to be about just wanting to move away and travel the world, it’s a kind of indie-pop track. Yeah, it’s just about getting away – we all come from a really small town and it gets pretty boring, so you just want to travel the world! But you do also miss it when you’re away. (Stephen)

Mark had this riff for that song – it’s a big riff – it’s probably the most exciting song, or maybe exciting is the wrong word… (Stephen)

It’s the song you’re most likely to dance to. (Stephen)

Yeah, we take you up and then throw you down! Every song on this album, as cheesy as it is, the way we seem to write is that we actually live a song before we write it. It’s like our diary. (Stephen)

It’s about going into the big bad world, trying to make ends meet, kind of soul searching and figuring out what you want to do. (Stephen)

It was cool because Steve wrote the chorus on Garage Band on his phone and we actually took some sounds from that and put them on the track. We couldn’t create it exactly, so we just took the Garage Band stuff from the phone. (Mark)

Yeah, I just sang into it. I had this song in my head and that’s how it started. (Stephen)

This is the oldest song I think. It’s stood the test of time – we all still love playing it and listening to it and it hasn’t really changed. It was one of those songs that just happened so quick, everyone was on the same wave length. (Mark)

It’s also about that same girl…It’s very Gospel, we tried to do a Gospel choir. “It all comes down to you”. It’s a pretty self explanatory one really! (Stephen)

We just got our friends into the studio and had a big session and got pissed, it was great, loads of fun! (Mark)

Talk is about my ex-girlfriend. (Mark)

Yeah, it’s kind of like when the relationship is completely stale and you just can’t go back. As in, “We don’t need to talk about this”. (Stephen)

That’s probably our darkest song and it’s on our first EP. We decided to put it on the album because we like it so much. (Stephen)

It wasn’t originally on the album, but then we were playing it so much at gigs and then we were like, “I don’t want to stop playing this!” So we were just like fuck it. We always said a 10-track album but we let one slip in at the end. But it’s very very dark. (Mark)

That was one of the last tracks we finished, it’s kind of about life and growing up and looking back at when you were younger. (Mark)

It’s fun. When we were recording it we all played drums, as opposed to just Vinnie playing we all just grabbed some sticks and it just sounded great. It was us and our producer, yeah any excuse to get on the record he took! (Laughs) (Mark)

He sang as well on All It Comes Down To You, in the choir. (Vinny)

We made him though! (Laughs) (Stephen)