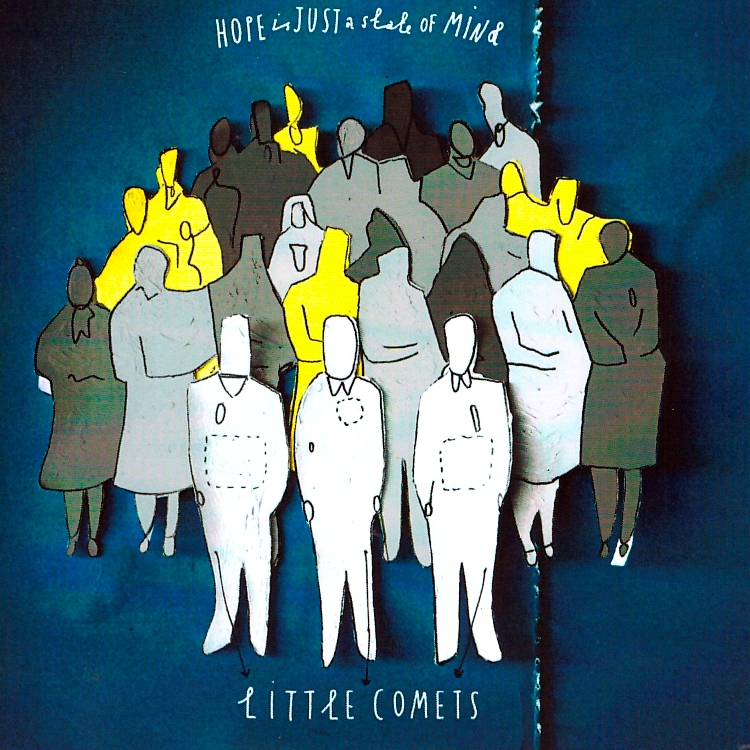 I think this album is the most personal collection of songs that we have ever put together. All of the songs are about something important to ourselves and there is a lot of narrative that comes from me directly. On previous albums we have tended to hide behind characters and duck issues – but not here.

This is a message to my little boy, William, who was born just as our second album came out. This is the first album that we have made since both me and Mickey became dads and I think a lot of the writing reflects that. I hope for my little boy to be happy and to follow his heart in a world that often doesn’t – that is the message here. We also managed to record both of our children and layer them into the song – editing this conversation was my favourite part of the recording process.

This was a song written through total procrastination. I couldn’t finish a lyric for something so I wrote this instead. This happens more than it should. The lyrics are really about the effects that the Conservative government of the 1980s had on the part of the UK that we come from (the North East). Certain trades and skillsets were simply vanished very cruelly. There are a lot of parallels with then and now, which are quite unnerving.

THE GIFT OF SOUND

We wrote this very late in the process whilst messing around. It is just about using your mouth and being expressive. I originally wanted the song to end the album but when we played the tracks together it just didn’t sit right…

This is quite a silly song. Our band is very much about being natural and not contriving much. This song is about contriving, amidst a little history of the band. Because when we started we used to contrive, and it just felt awful. There wasn’t the depth of connection to our music that we feel now.

I think this is my favourite groove on the album. Mickey wrote a lot of the drumparts but this one is far more relaxed and I think it has a nice flow to it. Lyrically, it is a very complicated way of saying don’t judge other people, just concentrate on being nice. I think if I ever get to a heaven and god says „yeah you were nice but ah, you didn’t believe in me so off to a pit of flames“. I think he/she would be pretty daft.

This was originally a B-side to an EP but it really gave the album a lot of balance when we played it back. It is quite a light song musically with lots of layered vocals which were lovely to record. On top of this the lyric is about the victimisation of single parents in the press. I think women need a much greater deal of support from society to be able to become mothers and nurture a career. I don’t at all feel that society adequately copes with this.

Ah man, this is a sad song. I think it is the most ambitious thing we’ve ever tried as there are a lot of layers. I’m not saying it is a total success but it is always good to push yourself and try something different sonically. The song tells the story of a little boy called Daniel Pelka who was killed by his mother and step-father in Coventry in the UK. He was abused over a long period of time and forced to eat salt amongst other truly horrendous things. Having just become a Dad myself I found the entire story extremely upsetting. This little boy was simply invisible to all the people who should have protected him.

I had a friend who trained to become an international rower in the space of two years despite lacking physical advantage or an experience of the sport. His greatest influence was Lance Armstrong. I think this story transcends sport and deals with a great many issues from sexism to cronyism, to corruption and greed. It really exposes the human condition. The song was great fun to record as it has lots of intertwining guitars and quite an energetic culmination.

Domestic violence is a huge problem in our world which does not get the focus that it needs. Maria Stubbings was killed in 2008 by her partner, who police knew had a history of domestic abuse. Maria was badly let down. I feel that our society needs to take a greater stand against ignorance of this issue in the media, in government and by those who we rely on to protect. That’s what this really tries to say.

I think this is quite an angry song, which is ok sometimes. I get hit hard when people just aren’t very nice or honest. I think you should respect people with honesty.  Some of the people we have encountered across the years are incapable of this – either through choice, or because they’ve forgotten how to be and lost themselves in the pursuit of accumulation. We really tried to capture this in the guitars, but it is quite hard as it is a pretty poppy melody.

This is definitely our marmite song. The night before the album was due to be mastered Mickey wanted to replace it with a song that we would have had to write, record and mix in 12 hours. I think we decided that he had lost it at that point so we just went with it. We often shy away from songs that song too obvious or too big or too poppy and I think with this song we are just a bit scared of it. It is like we aren’t the right band to be playing it, but once we get past this I’m sure we“ll be fine.

THE BLUR, THE LINE & THE THICKEST OF ONIONS

I don’t know how Robin Thicke’s song got onto the radio – it either means that people literally take no notice of lyrics in songs anymore or they just feel no moral responsibility to their audience. I think sexism is beyond rife in our society, in both latent and blatant ways. The media doesn’t help and I feel that people should be respected more across the media. Challenge people with detail on issues, rather than the 30 second news bulletin, the focus on detritus and lack of content in most music. Add a piano and a less ranty lyic and that is pretty much this song.