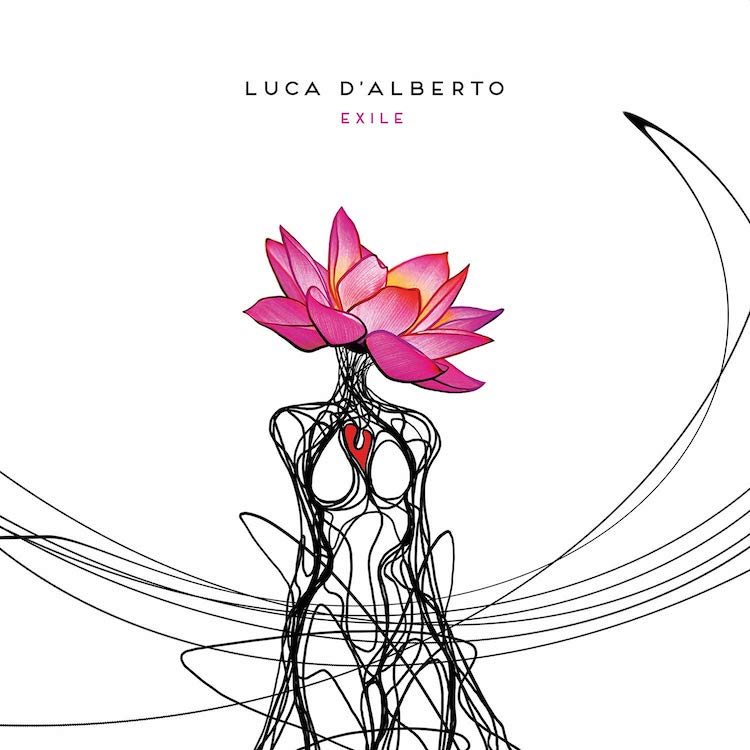 Working on Luca’s new album artwork was an immense honour. Not just because of our deep and binding friendship, but also because I admire the sonic and emotional complexity that he is able to bring to his work. When he told me about the message he was transmitting through his music – the exile from emotions and the desire to rediscover them – I decided to portray the concept through the image of a flower. The flower takes on the shape of a body through its flowing roots, seemingly forever bound to the ground from which it springs. The life essence of that same flower blooms at the heart of it, as it does within each individual. I chose to depict the roots with simple fluctuating black lines as I felt that represents Luca’s musicality. Especially on this new album, the songs are built from the ground up and explode into larger sounds, giving us the sense of moving upwards, and of life. The flowing black lines also represent the notes, the live music. We also decided to create an animated version of the artwork, with the help of Ermanno di Nicola, which you can see at the start of the video for the first single ‘Consequences’ – it really shows how the music inspired me to create this artwork.

‘Exile’ is about the connection between the mind and the heart and the continuous flow of emotions and thoughts that passes through our vibrating body. Our thoughts, our silences, our feelings; they are confined to our consciousness like a phantom exile that explodes within us every day. I played and recorded every instrument on this album on my own, which is why I feel like I too lived in exile while I was creating my sound. This is what I explained to my good friend Carmine Di Giandomenico who designed the cover artwork. He was able to render an image with incredible creativity and sensitivity.”