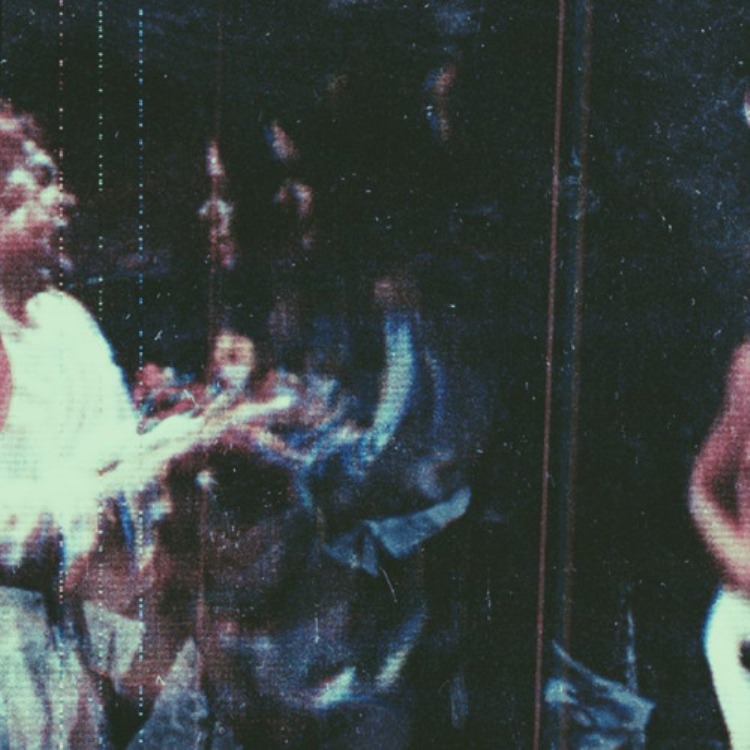 Our debut album Illuminations is an intimate and honest expression of what has been going on in our lives in the last year, but it also links to a longer thread of growing up as brothers, our friends, relationships, ambitions and fears. We wanted to create a record with darkness, grit and nostalgia. We wanted it to be an experience of falling into our world for a while, and embracing some of the dark, the gloom, and the hope. The cover art for the album was designed by Yoshi Sodeoka, who also designed all of our singles leading up to the record. As soon as we saw his art we felt like we’d seen something that visually totally represented our music.

We always said we wanted an introduction to evoke a dark and hazy mindset ready for the album. We used the chord sequence from „Sometimes“ and played it with this dusty organ sound. We then built layers from lots of found sound, went around recording TV static, flicking switches and creating pitched vocal samples. The producer of the record MJ added this arpeggiating synth that builds to the end. We wanted it to feel like it was a mood-board of our sound.

Sometimes is one of the first songs we’d written for Lusts and it felt right to open the record with it. The song deals with the idea of obsession, of believing that someone you don’t know is the person for you, despite not knowing them. Icons, heroes, celebrity, it taps into that feeling of wanting or yearning for them, without them even knowing who you are.

„Careless“ was written after we’d read „The Rules of Attraction“ by Bret Easton Ellis, and we were inspired by the dark mood of the book. It can be a word that captures my imagination and seeing the word „careless“ instantly sparked an idea for a song. We wanted to have a track that had a spoken word passage as well, so we created this stream of consciousness rant for the bridge and recorded it through distorted microphones and lots of reverb layers in MJ’s studio.

This song was written during a serious Echo & The Bunnymen phase. We were listening to „Crocodiles“ a lot. We wanted a song that moved fast, and was distorted and reckless. We’d written it live and I was shouting the chorus over the top. We always want to juxtapose that punky aggression with some electronic introspection, and the end of the track descends into these reverby synths and recorded conversations we had in Paris. It was recorded late at night with James faintly murmuring words underneath it.

I think that „Temptation“ is the epitome of the sound that we wanted to create and that’s why we released it first. This song poured out really quickly, one of those tracks that you don’t even think about when youÕre creating it. I have a demo of me singing it from start to finish, pretty much the first time. It’s really nostalgic, but we wanted it to be upbeat so we made it have a driving rhythm. Someone described our sound as Ôuplifting misery. I think that fits well.

We think of „Illuminations“ as the heart of the record. It was written after James bought me the book „Illuminations“ by Arthur Rimbaud, but he’d unknowingly bought me the French edition so I couldn’t read it. I wanted to write something that I thought the book could be like. I feel like it sums up the unique way that we can reach ideas and take influence from each other. After speaking with James Endeacott who signed us, we all felt it had to be the album title.

We’d always said that we wanted our album to feel like it has a flow with interludes linking it together, so it felt like a journey. We imagine this as a sort of fuzzy „Lost In Translation“ moment. We’re always recording voice memos on our phones, and we’d both recorded these ideas separately. We played our phones side-by-side and realised that these two ideas completely fitted together. We took this into the studio with MJ and he created these loops with distortion pedals and keyboards and they all just linked together. It felt like a total mix of all three of us.

It’s hard to explain but „Waves“ was inspired by a few elements, one of the things was colour. I just saw this colour in my head of how the song should be and created it. I often just have these pictures of the track in my mind and it comes from that. We’d been listening to lots of Daniel Avery and MBV, and I’d been reading Virginia Woolf’s „The Waves“. I liked the idea of just letting your subconscious go. I also had this image of a storm whirling around you, and an ambiguity as to whether the waves carrying someone to you was a good or a bad thing.

We’re massive David Lynch fans, and we always watch his films when we’re trying to capture a mood or get into a certain headspace. „Mulholland Drive“ was a important inspiration for our sound. „Bad Weekend“ has all these dark layers of washy guitars over the chorus, and this weird undercurrent, so it’s driving and melodic but feels like there’s danger. It’s a juxtaposition that we’re always striving for.

We’re both big fans of songs that we call „anti-anthems“. We love it when a song celebrates what could be perceived as not being „normal“, being an individual and making your own decisions. It can then be really unifying to know that other people feel that way too. The guitars in the chorus were recorded to sound like they’re falling apart, we used lots of effects pedals to create that sensation, like they’re drowning or constantly de-tuning.

„Fountain of Love“ is one of the more reflective songs on the album. It’s driven by the vocals and the bass, and MJ created this drone of reverby guitars looping through a tape machine underneath to create this tension. It’s got a cold, dark feel, and it’s about mortality, love, fears and hoping to find something meaningful. Halfway through we wanted it to sound like the Cocteau Twins playing in a John Hughes film and so we layered up these glistening guitar sounds using a Roland Jazz Chorus amp.

„Mouthwash“ is a very personal song. It’s an amalgamation of a few different intertwining threads that were happening in my life. It addresses relationships that are breaking apart, aspirations and what you want from life, where you want to go, the idea of escape, frustration. We wanted the title to be an otherwise inanimate object, so you sort of project your feelings onto it. It felt like a good way to end the record.