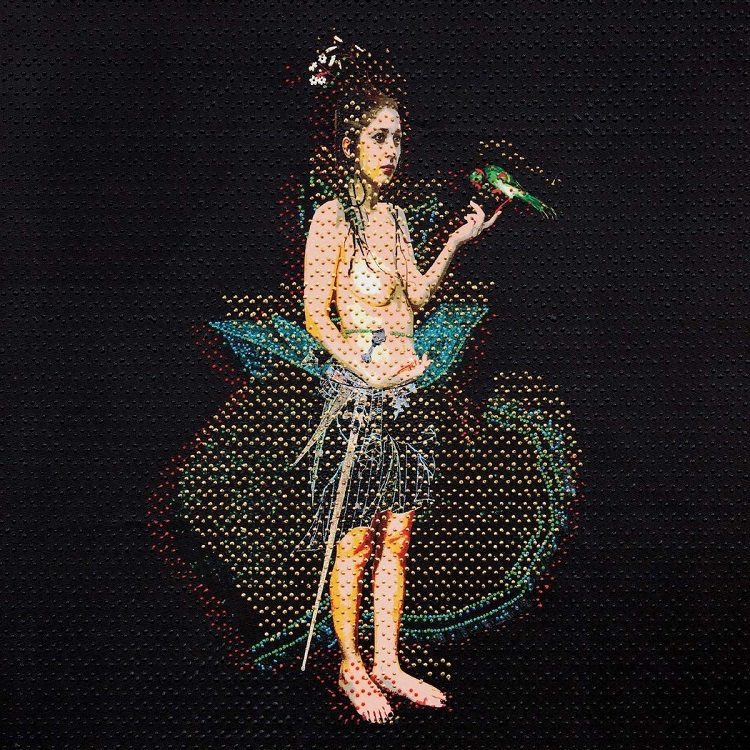 I originally wrote this track over a sample I made of Autechre. Then I got on a bus in Brighton – I love writing while on the move – by the tIme I got off the bus this song was born. I got rid of the sample which I replaced with Daf and later on added Tombak. This song is about human nature and our inner realms… and speaks for this awareness that we all have and struggle with, our ego, our weaker self… It has no melodic elements and is mainly a percussive track, which is a good introduction to my sound escape for this record.

I am very influenced by Bjork and this song is probably one that most reveals it… It’s a sad song despite the upbeat sound; it speaks of what is most hard to admit when you love someone but they don’t love you back. One is very vulnerable in this situation and I wanted to turn that feeling into something strong , and that sadness into joy and even euphoria… I am fascinated with the madness that comes with love…

The desert is my destination ; my spiritual education and geographical roots really come through in this song which is about emotions and loyalty; loyalty requires a strong faith in whatever or whomever you are loyal to… and this means a good understanding of and hold on your emotions. The story of prophet Joseph is filled with teachings in this regard. Never does he hold a grudge for what others bring upon him. Neither the jealousy of his brothers that fake his death nor the love of a woman that ends him up in jail shake his faith in God… I find this truly inspiring. At the end, he ends up on top of society as the right hand of the Pharaoh, reunited with his family… Talk about patience and faith…!

I wrote this song when I returned from one of my travels to Lorestan, a province of western Iran in the Zagros mountains. These mountains are a big part of Iranian history and when I returned from this trip I was filled with a feeling of belonging and longing. Belonging to a land and longing to return… I was also very inspired by Mooye Khani, a mourning chant specific to this region. Not that I have even began to explore the musicalities of Mooye Khani… one for the next record fore sure!

This song was written in LA and is based on melodies of Homâyoun, a dastgah in Iranian music. My inspiration and direction on this journey is to write songs in these Iranian placements and bring these worlds – western & iranian – together… lyrically, the song is a monologue more than anything else, telling myself to get on with it and stop talking about these things I imagine and do them at once. Moving in one direction, united. On the inside, this means gathering all your thoughts, intentions, focus and will in one place to concentrate your forces.

MY ENEMY, MY LOVE

In Sufism there is a practice called Zekr, which means Remembrance. It is the act of remembering “the face of the beloved” or God. This practice has many forms, one of them is a chant which slowly speeds up to reach a climax. This song is based on this structure. The rhythm is played by the frame drum known as Daf. This percussive instrument was originally only played in the context of Sufi practice and is the signature sound of the album. The song is minimal in lyrics. It just says, “I was told that you’d be here, but you’re not”. The world God in the Arabic language is Allah, and it means the One that is Not. I was very inspired by this. God is everywhere and nowhere. It is and is not. To be is to not be. And all there is Be. To get rid of everything to solve oneself in the ocean of Existence… seeking Him not to find Him, but to ultimately find oneself by losing oneself. As of the title of this song, you know the saying “keep your friends close, your enemies closer?” I believe that I am my ultimate friend, and my ultimate enemy. It is trough spiritual practice that I bring these two together, in an attempt to be free of them both.

This song is about regret. There is a kind of love and awe which is not worthy of this world… but we seek it regardless… perhaps just to burn as bright as the sun. The experience is intense… and mad ; and in hindsight you cannot help by to judge yourself – what was I thinking ? what did I expect ? – but you know that if you could go back in time, you would give into that fire over and over again… The song features two of my favourite instruments, the Fender Rhodes and Kamancheh, Iranian bow.

A natural philosophical development of “Igneous Sun” was “If”. Although musically it is an electronic track and sonically they are different, lyrically it left me where I wanted to end this record, asking questions about where I was on my journey and where I wanted to go. It is also last on the record as I mainly produced it. I came a long way since my first experiments on Garage Band in 2011; I learned so much while I was searching and making, trying and writing, asking and looking… the one constant thing that got in the way and still does is fear. This song is really about that. Fear is the opposite of Love. It is the lack of faith. Faith that you are right where you are meant to be.