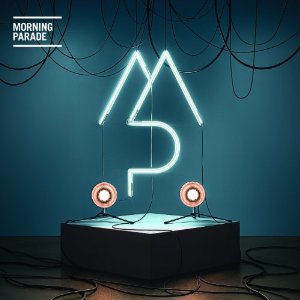 After weeks of debate we eventually agreed on the opening track for the record, we were torn between ‚Under The Stars‘, ‚Us & Ourselves‘ and this one, ‚Blue Winter‘.

It was one of the very last songs written and recorded for the album but the very first song we did with David Kosten.

The song is about escaping from isolation, paranoia, and being trapped inside the walls of your own mind. It contains one of my favourite lyrics from the record ‚Magpies circle memories that I’d swept to the side‘ – I’ve always liked the imagery of these birds pecking away at shiny thoughts and memories that you’ve tried to suppress and forget.

It was recorded across the course of a few days with most of the instruments going down at RAK and the vocals and a few synths going down at the Pool. We wanted to capture the iciness of the sentiment and lyric whilst keeping it as raw as possible, David had us all instrument swapping with leads into pedals and pedals into synths. It was one of the most exciting tracks to record because we had no real idea how it was going to sound in the end.

‚Headlights‘ is one of the oldest songs we have. It was written in about 15 minutes on an acoustic in a hotel room in Bristol. I always thought it would make a decent B-Side but it turned out to be one of the label’s favourites – we mentioned pulling it off the final track listing for the album and they nearly had a heart attack.

The song itself is a bit of a morbid view on relationships. People who love each other are often the people who hurt each other the most. There is a gritty side to romantic love, a thin line between true companionship and dependency that is rarely explored. I thought it made for an interesting if slightly morbid sentiment especially juxtaposed against the sickly sweetness of the melody and arrangement.

It was the first song we showed to David and we tore it to pieces. The first time we heard a mix we were all mortified, that’s when we knew we had to work with him.

It was just a keyboard riff and a first verse for about 6 months. Then it became a 5 and a half minute long acoustic disco nonsense epic.

We’d been toying with it out on the road for around a year and we never really felt like we’d cracked it, that was until we stripped it back to a kick drum and a keyboard… like it was at the very dawn of its creation.

We messed about a lot with the structure; the original arrangement had an extra verse and a longer instrumental. David made some pretty brutal cuts that took the song somewhere new and we all agreed that it better suited the sentiment of the song, haunting, disorientating, euphoric and over before you know it.

It’s about going out and losing your mind, the nights that seem to blend into a series of flashbacks, finding yourself in and out of awareness and exploring the places our minds choose to be during those experiences. We always think it’s good to let your mind wander once in a while.

RUNNING DOWN THE AISLE

We learnt how to make this record on the job, amongst hype, the watchful eye and opinions of the media, whilst touring heavily, and under a gentle pressure to produce something that could be commercially successful. I think for a while we were a little afraid to push our own boundaries and try something new, we had a bunch of songs and ideas on the fringes that we hadn’t ever really considered as contenders for the album, we hadn’t really even considered them at all as songs for Morning Parade.

Our manager heard a rehearsal room demo and really encouraged us to work through it. From a 9 and a half minute piano demo we dug out the skeleton of a melody and a couple of decent lyrics and started working on a basic arrangement. We were at the point where we thought the album was finished so there was no pressure and we went into the studio with open minds. Looking back – I think this is where David found the best in us.

‚Running Down The Aisle‘ is about losing sense of reality and losing sense of your self. It doesn’t matter where we are in this world; we live within the walls of our minds and the feelings in our hearts, I find it so very confusing that quite often they tell you two completely different things.

It’s been a great discovery for us going forward, like unclipping our wings.

This was born from a basic guitar riff that Chad had been playing at rehearsals and the first 2 lines rolled straight out over it and the song was born.

Ben, Phil and Andy had all booked holidays over the Christmas period in 2010 so Chad and I decided to finish this one idea before they got back.

We’d spent a lot of time away recording the album and touring and for the first time in a while we were back at home walking around the streets where we’d grown up and we felt out of place, uninspired, uncomfortable and lost, like aliens. We spent every day together working on the song and talking about how strange it is to feel so disconnected from your roots and how quickly life moves on. The song title came from the idea of being more than 1 person in your life, a collection of people, ages and experiences all at once.

We recorded it in the January of 2011 with Jason Cox but reworked it later that year in the summer at RAK studios. I remember David saying I sounded like I was getting a cold and should do the vocal quick, I lost my voice the next day and if you listen out carefully you can hear my voice starting to break up in the recording.

We owe this song a lot; it feels like an actual member of the band when we talk about it.

It was born in December 2009 on New Year’s Eve, I was heading out for drinks with Phil (bass) and he looked at me and said ‚you look like shit mate, are you sure you wanna go out?‘ which quickly translated to the opening lines of the song which came fully formed. After about 5 months of doing our day jobs and spending the evenings banging our heads against the rehearsal room wall it was finished and quickly became our favourite song and live opener.

We recorded it exactly as we play it live that summer with Jason Cox at 13 just after we signed to Parlophone. It was the first song of ours that got played on the radio and the only song that has been played at every single gig since we wrote it.

When we came to putting the album version together we used most of the parts from the original live recording, it just has that magic that shouldn’t be messed with.

CLOSE TO YOUR HEART

Close to your heart was known as ‚Van Song‘ for most of its life. We wrote it in the back of a tour van on a battered old acoustic on the way home from a festival gig in the summer of 2010.

I think the bulk of it was recorded at 13 with Jason Cox, we re-did the bass and drums at RAK with David after the Blue Winter session as we really liked the kit sound we got there.

It’s a song about being high on life and feeling invincible, easily the happiest and most light-hearted song on the record.

‚Half Litre Bottle‘ was written in my kitchen at home in Essex in about 15 minutes and really we just started putting it into our live shows to give my voice a bit of a rest and to break up the set.

Once the album was finished we went in with David to record some B-Sides and put down the guitar part and vocal live with a couple of extra takes and some magic from Chad and Ben. It was finished within a couple of hours on the same session as ‚Monday Morning‘.

It was intended originally to be a B-Side but we all fell in love with the recording and thought that the song deserved a place on the album and that the simplicity of the arrangement added a nice contrast to the record.

It’s been a song for a long time, I think it first came to life when I was about 21 and we always liked the opening lyric and the melody of the song.

It’s all about that Monday morning feeling just before your alarm goes off, half awake, half dreaming where you wish you could just stop time and stay in bed.

We originally released it as the B-Side to under the stars back in November 2010 but felt that the song was strong enough to be considered for the album or even reworked as a future B-Side.

We recorded it and ‚Half Litre Bottle‘ in a day last summer, it was the very last session we did for the album.

For some strange reason we recorded it backwards with the vocal and guitar going down first as opposed to the bass and drums. We then all recorded our parts individually without any input from each other, just one on one in the studio with David. It wasn’t until the end of the day that we heard the whole thing come together.

It’s a story of two lovers, and the moments before one of them breaks the others heart.

Love comes with a weight and a responsibility and having to break someone’s heart is a horrible thing to go through, but unfortunately sometimes it is a necessary evil.

Ben wrote the piano motif and was playing it in the studio, I sung out a melody and lyric over it pretty much fully formed and luckily the recorder was on.

We recorded this song at a few different tempos and always elected for the fastest, the melody seems to push against the groove better at a faster pace.

It very nearly didn’t make the cut, Ben fought for this to stay on and I think our hardcore fans will be pleased he did!

Another song that was written in about 15 minutes was Born Alone. It was a sunny summer afternoon and the song happened very quickly with everyone throwing in ideas that seemed custom made for the arrangement.

It’s a song about learning to understand yourself and appreciating life’s journey rather than just trying to reach a destination. It holds a special place in our hearts as it captured a time in our lives where we felt we had reached an understanding of what we were and what we wanted to achieve. We knew as soon as we finished it that it had to be the song that closed the album.

It was recorded half at 13 with Jason Cox and the additional production happened right at the very end with David Kosten. If you listen carefully you will hear a group vocal and some group clapping at the end of the track – we invited our closest friends and allies to come in and sing on the song and had a good few drinks afterwards…