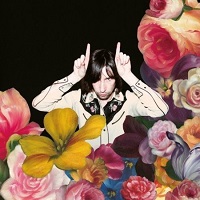 It’s a psychedelic space rock critique of youth culture. An anti-conformist statement. We did a 3-minute-version of it, it’s really cool. We needed it for TV, because a TV company gave us some money.

It’s a song about family values. It’s one of my favourite songs on the album. We got the middle section which breaks down, like a dream / nightmare sequence. It’s got a 60-piece orchestra plus us playing live plus the Sun Ra Orchestra. It’s a heavy song, it’s a Blues song, it’s a sad song, and it’s an angry song. I hope a lot of people can relate to it, I’m really proud of it.

We got Mark Stewart from The Pop Group singing on that one, one of our favorite artists, singers, songwriters, lyricists, activists. It’s got a really cool groove, an urban blues that you can dance to.

A high-energy free jazz rock’n’roll song. The lyrics start out with a guy that’s attached to a post, and they give him his last cigarette because he’s going to be executed. Then jump-cut to a psychedelic nighttime scene of loose women and crazy drugs. There’s also a car crush involved. It could be a metaphor for another kind of crush. It could be whatever you think it is, but there’s a reason this guy is gonna be executed, you know. It’s a fucking great song, the funniest song on the album.

It’s about a winded person, that’s all I’m gonna say.

Kind of up-tempo, I think it’s about… (telefoniert kurz mit seiner Frau) It’s about a drive through a modern city at nighttime. But not the culture of landmarks, more the street scenes of regular people and shops. What other people think is ugly I think is beauty. So it’s an invisible city to many people.

We found an early demo by Jeffrey Lee Pierce from The Gun Club, acoustic guitar and vocals, and we really liked the lyrics. So we took them and wrote a new melody and made a new song out of it. It reminds me of alien war, it’s very cinematic.

It’s about the assassination of somebody’s character. Just one long trail of vomit, completely malevolent. It’s about the kind of person that people think is decent, they dress in the right way, say the right things at the right place to the right people, but really is not that nice and kind of creepy.

We got Robert Plant from Led Zeppelin singing on that – we sing together in the chorus. Two Bobs! (lacht)It starts with a loose, bluesy, swampy jam, like early Suicide. It’s about someone being eliminated.

Turn Each Other Inside Out

That’s a sex song. I found this poetry by this underground American streetpoet David Meltzer and I really dug it. So I bought this anthology and found a section that I thought I could make a song out of it. I took the lines I thought would work best in a rock song, rearranged them, and made a new song out of them. It took us a while to get to Meltzer, but he loves the track. He gave his blessing.

It’s about somebody you might have met a long time ago who is just a negative force, a negative personality. You have moved on in your life, but they haven’t, and when you see them coming towards you, it’s like a disease. You’re kind of free of them, but they’re not free of themselves. It’s another character assassination song.

Walking With The Beast

It’s a sad-angry love song. There’s almost a sense of resignation and acceptance of a situation that you no longer have any control over. The lyrics are sad, but the music is joyful. There are a lot of mixed emotions in it. It’s a great way to finish the album.