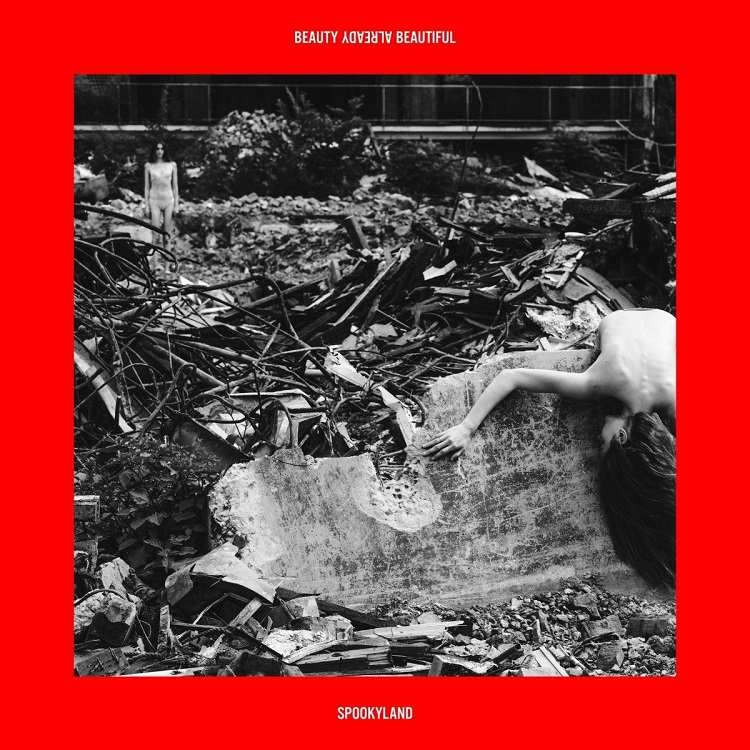 There’s a woman drained in a wasteland of destruction, another version of herself watches on. This album’s exploring the catastrophe of being caught between two opposing forces; the frenzied and cynical selves. equally manifest and unwilling to take turns. Somebody gets hurt.

We had been listening to Patti Smith’s accounts of graveyards, and how she kept herself to the perimeter. The sound is a big string quartet, which is sort of the landscape, with me pronouncing words wrong around that. Tony had been wanting to do a strictly vocal and string track with us for years.

This might be our favourite. I like how it never explodes into a crescendo, which is usually what happens with us. Tony turned Nath’s drums up real high, which makes it almost hip hop. I learnt from Nowhereland that a good groove can carry a crowded lyric like a gentle breeze.

‘Big Head’ is giving gender tradition a little rattle, but as the bald face love song, not the straight–‐laced facebook post. I was trying to celebrate the promiscuous woman; raise up some kind of female James Dean.

A locker room pep talk in a song. I love champions because it shows the band as a whole and the personalities of the players individually. Everyone is playing lead throughout, together and apart. Nic makes the song sound like it’s rocking side to side..like some kind of pro tools sorcery, but it’s just his bass part, you ought to hear it by itself.

I really like the music on this, the boys turned a boring finger picked lullaby into a new wave credence sort of thing. Liam does this crazy cyclone sounding guitar part in the chorus,  I’ve never heard anything like that before.

This songs been rewritten about four times, originally because It was too long and a few more times because we didn’t really like it. Most these songs are about trying to celebrate something that probably shouldn’t be celebrated, Rebellion is meant to have a laugh at idealism, a sardonic romance anthem, but after all the re writes it sounds the opposite.

Vocally, I was thinking about Van Morrison’s No Guru record for Prophet. You can’t really hear that because I can’t sing well, but it was freeing nonetheless, doing something more wide screen. This song was kind of punky once, but Nic made a last minute change to his whole bass theme which completely re–‐directed the way everyone delivered it. Mike Mogis was kind enough to do some pedal steel over this track, he was very mysterious about it too, locked in his studio at odd hours for 5 minute increments, I don’t think we even heard what he’d done until we got back to Australia, it’s such a beautiful touch.

I got interested in how when enough time passes the writer is the final authority on the event. In terms of a love song, I wanted to entertain what the other might say if they were given the podium. ‘Turn’ is a love song that escalates into an incident of thorough castration.

There’s a clip of Lou Reed doing a rocked–‐up ‘walk on the wild side’ at Farm Aid in the 80’s, he looks like he’s having fun, so I wanted a turn. Tony calls this the ‘meat and potatoes’ song of the record, he’s right too, there’s got to be thousands like it. This song however, belongs to a smaller class of the Americana about Redfern.

A whole lot of eyeball metaphors in this, one. It’s about something going wrong along the way, or at least wondering if something did. The line ‘god’s eyes have to blink’ is repeated a lot, so blaming God for the world’s woes can seem reasonable, pathetic, funny or even annoying, all in one listen. Nath is on fire in this one, it’s his subtle rhythmic changes throughout that make it feel uplifting, instead of a dull downer of a song.

Bulimic is mostly a song about social friction I think, when there’s chaos in your mind, there’s a certain impulse to hurl the whole thing into the toilet bowl to find some kind of self esteem, but this kind of program is basically doomed. Bulimia of one’s humanity.. no one’s gonna’ appreciate that.