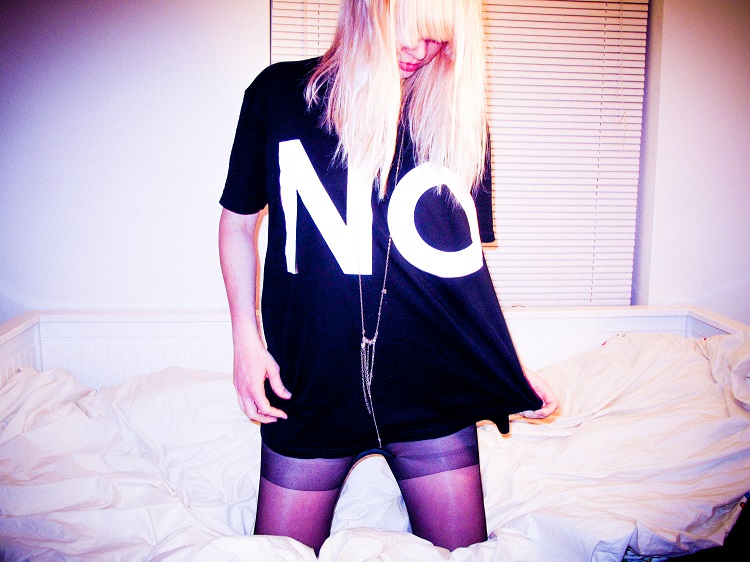 A couple people pointed out to me that all the EMA solo records begin with static.  The first one on “Grey Ship” has a 4track tape hiss that I feel is very welcoming and intimate.  “Satellites” on TFV has a thick harsh noise binary with a deep bass.  That one is basically a warning shot.  In 7 years I used the box fan that was going in my upstairs studio and then sculpted it using a tremolo but shifting the wave shape.  I think static is good for setting a mood.  It gives a sense of place.  I feel like this intro is very hypnotic.  A friend of mine called this song “cleansing”, which I agree with. It’s about moving past anger.  It’s about letting go.

Oh man I just love this one sonically.  It’s difficult to make songs that actually sound dangerous and frightening and I think “Breathalyzer” does both.  But it’s also got a lot of little hooks and riffs that are super melodic.  It’s heavy in every sense.  The sounds are mostly made with a moog and then that same moog run through a modular rack and I’m tweaking the filter to make the high solos parts.  I have a 20 minute instrumental of this song and it RULES. The kind of scary whispered parts in the beginning — at first they were just kind of vocal technique cues — “relax your throat” — but then it sounded insanely creepy so I just kept going.  I actually had a guy say to me once “I can make you feel small” and so I added that cuz it seemed to fit. Leif pretty much hated this song from the get go.  It reminded him of being on too many drugs in a horrible place and made him feel really uncomfortable.  I was like, good, that means it’s working!  This song is def about being way too fucked up to the point of discomfort — but then moving past that.  Taking a “heroic dose” and kind of freaking out but then finding a way to calm yourself down and enjoy the ride. Also I think it’s funny to set such an intense feeling in the backseat of a Toyota Camry, driving around malls and big box stores.  Transformative experiences can be ANYWHERE.

This was one of the first songs written for this record.  It used to perform it solo during my durational sets.  The chorus is like stupid simple.  But it’s about control in a way — the tension between the calm and controlled delivery vs the lyrical mantra of “i wanna destroy” over and over.   I picture a person sitting alone in a bedroom staring up at the ceiling or at a wall.   I read once that in customer service phone calls the way to tell if someone is genuinely about to lose their temper is if they get really quiet. Even in the end of this song the yelling never really takes over, it’s like a chorus of sweet girlie voices repeating the phrase.  This is the sound of someone who is truly about to lose it.

Blood and Chalk was originally written during the #Horror soundtrack.  The lyrics came out really fast in one sitting and I figured it was pretty much about a girl about to hit that monster teenager phase.  But when I was working with Jake (Portrait) he said he thought it was about a police shooting.  I think that actually makes more sense, especially with the title.  All the lyrics take on a different meaning when you look at it in that light, and I wonder if this was my subconscious working on a different level.

I’ve talked a bit about this one previously.  At one point in time I had wanted Exile to be a 3 record set — one of big “technicolor” songs, one experimental long tracks and one of these kind of “black and white” minimal guitar songs like this one.  I wanted it to sound like if a young Greg Sage from the Wipers was making solo music on a computer in a bedroom.  Direct in guitar with a cheap chorus effect.  Also I wanted the drums to be really tiny, reminiscent of the first synthetic drum machines which were often attached to home organs like a Wurlitzer.I obviously got talked out of the three record idea (for now!!!)

So here is the Guns N Roses / Hindu mythology / anti- Charles Manson mashup. Growing up in South Dakota we had a bit summer fair called the “Sioux Empire Fair”.  They had chintzy rides like The Zipper which were terrifying because they seemed like they might break at any second.  Also, since this was the largest city in the state, people came from miles around for this big event.  Farm kids in the city.  There were lots of fights and teenagers making out in the lines of rides.  That is the vibe I wanted to go for.  A little sleazy, a little sexy and a little menacing. The spoken word has a part about the Hindu monkey-god Hanuman.  There is a story where he’s a toddler and he wants to fly up into the sky because he thinks that the sun is a giant mango.  At the last minute Indra smacks him down and he falls to earth and breaks his jaw.  But the point of the story isn’t some Icarus thing about hubris where you get what you deserve if you try to fly too high.  It’s more — if you try to do big things you might get fucked up — you will sustain some damage — and that’s ok.   There is also this kind of desert cult aspect to the whole song.  There is a crazy Manson documentary I saw when I was young where these Manson girls have guns and shaved heads and they sing “if you want it, here it is, come and get it” and it’s super scary.  So at the end I’m quoting that.  Basically I think Manson is a scumbag.  He was manipulative and abusive and people forget that he was actually trying to start a race war.  This is just the Manson girls without Manson.

This is also one I’ve already spoken about a bit.  It’s the oldest song (besides the Gowns one).  It was one of those that the subject matter felt right on the edge of being taboo.  I’ve learned to just lean into those as they usually contain a recognizable kernel of truth that people are avoiding.  Marked and Butterfly Knife are other examples of songs I almost didn’t put out because they seemed too controversial when I wrote them.

This was also one that I almost chickened out on and didn’t put on the record.  But actually it’s one of my favorites!  And the ladies love it. It’s got one of those EMA – constructed structures that doesn’t really follow the verse / chorus / verse thing, so it was fun to make.   I feel like the subject matter here is actually more forbidden than just about anything else on the record.  To admit to being a woman over 30 in music — to actually reference it — it makes ppl uncomfortable.  But my vision is getting better, not worse.  My ideas and my ability to execute are growing.  Still tho, the patriarchy and agism and double standards are strong.  It gets to me for sure.  This song is about trying to say “fuck you” to that, even if I don’t always feel that way.

This comes from a pretty deep place of some pain.  In high school there was a group of guys I really looked up to because they played in bands and knew a lot about music.  But they also said fucked up stuff about women and occasionally made racist jokes.  This is about the tension of sitting in a room while that shit is going on and wanting to say something but not being sure if you have the social status to pull it off.  Eventually I would talk back and speak up if something made me uncomfortable, but at first it was difficult, in some ways because initially hearing that stuff can be really shocking and kind of paralyzing.  Eventually, having to speak up to them made me really tough.  It made me unafraid and able to utilize humor and other skills to call people out in a way that was effective but not outright scolding. The downside was that it made me convinced that all guys were secretly like that — that they thought serial killers who killed women and cut them up were funny or cool, that they wouldn’t really respect me until I made them.  It gave me an armor, but it was also kind of an issue in relationships I had later in life.  After I moved to California I was dating a sweet guy who really just thought I was super cool, but sometimes I would act like way too much of a hard ass.  And he would always say, “Angel, why you gotta be so tough?”

This is an old Gowns song that Ezra used to sing.  He wrote most of the vocal lines and I wrote the guitar part and he was gracious enough to let me record it for this record.  Basically that riff is one of my favorite guitar parts I’ve ever written and for years it would be the first thing I would play when I sat down with a guitar, so I really didn’t want it to disappear.   Guitar is funny.  I love it, but I sometimes feel like it disqualifies me (along with vocals) from being thought of as a serious “composer” or electronic musician.  All the Gowns and EMA stuff have electronic elements, and I’m cutting things up and processing them and arranging them structurally in non-traditional ways, but throw a guitar riff in there and it’s “indie rock”.  Sigh. On the other hand guitar rules.  I’m a sucker for interlocking riffs and harmonies.  This is one (along with 7 Years) that I was really trying to channel Henry Barnes of Amps For Christ (and Man Is The Bastard).  He’s an amazing guitarist and composer, one of my favorite record makers of all time.

WHERE THE DARKNESS BEGAN

It’s possible this song should have been first on the record.  It was a toss up between this and “7 Years”, but I felt like “7 Years” was an easier entry point.   This was part of a longer spoken word improvisation that was made after the Charleston church shooting in 2015.  Stephanie McCrummen wrote an amazing story for the Washington Post about the last people the shooter stayed with called “American Void”.  It’s a complex and harrowing portrait of American economic decline and paralysis.  I saw the whole country in that story, and I saw my own apartment in that trailer.  It was an interior that was familiar to me… 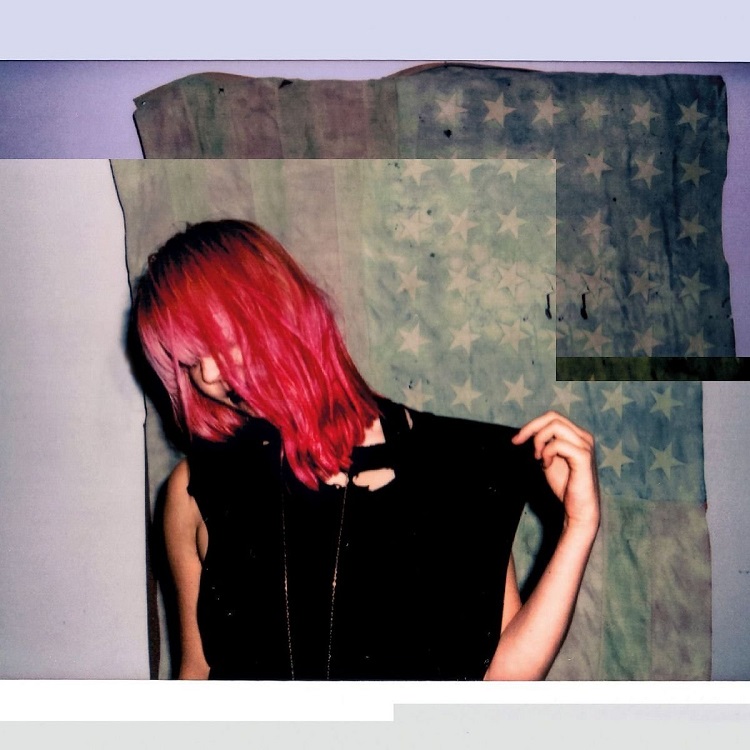