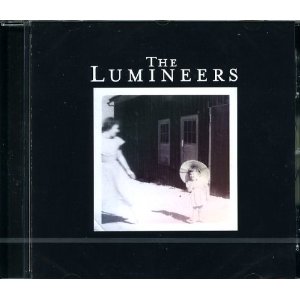 Flowers In Your Hair

A lot of the songs were built up over a long period of time and so the album is very much a ‘best of’ collection. This was on an old EP that we had and was one of the strongest on there. It does have that San Francisco ‘hippy’ vibe of the flowers in your hair. When I first heard The Lumineers this song sold me. (Stelth)

I think one of the other things that’s interesting is that Wesley and Jeremiah had done a lot of different musical projects that didn’t really sound anything like what The Lumineers are now. From my understanding I think Flowers In Your Hair was the beginning of this sound. (Ben)

True story. Wesley was in a bar talking to a girl and tried to make a move I think, so she said, “Silly boy, classy girls don’t kiss in bars.” I think ironically they did end up kissing later that night in the bar! (Laughs) Maybe she wasn’t a classy girl. But it’s a very literal song and a very direct story. It’s maybe the only autobiographical story that we have because the other songs are stories about other people. (Stelth)

Submarines It’s about Wesley’s great Uncle as there was a story of him seeing submarines just off the Eastern Seaboard and everybody thought he was crazy. However a lot later there were some excavations and submarines were actually found under the water. So the whole time this guy was viewed as crazy, but then you find out after he was dead and long gone that he could have been telling the truth. (Stelth)

This is about Brandy. Well the Dead Sea is a really dense water where you can’t sink. It’s basically about Wesley’s lady friend, as they were getting to know each other she said, “You’re like the dead sea.” I like it because it’s almost a dark reference but it’s such a beautiful song, it’s a love song. It’s kind of talking about the move from New York to Denver as well and that being this great decision. (Stelth)

There’s also a feeling of a lack of choice in the song as well. It has this sense of not so much about courting but also about being taken and lifted up by someone. (Ben)

We used to all play in this bar called The Metal Arc in Denver and at the time I was still playing with The Lumineers on and off. I would play in this bar at a sort of open mic night and then also with them. The place was a very small setting and it was a very long bar – very shallow, like a basement, very dark – and so you could be playing and nobody at the back of the bar would care. So they started doing this thing where they would start yelling, “Ho! Hey!” There would be shouting on the beat and you couldn’t hold a conversation. It is this kind of song, it’s punchy so you can get people singing along too and it’s really hard to escape that moment. You could be in the bathroom and it starts you clicking. You know it’s a basic love song but it just grabs you. (Stelth)

It’s also kind of a break-up song too, which is sort of ironic because of some of the connotations that have now been associated with it. For instance we have heard of a lot of people using it for their weddings and that’s kind of funny. It’s part of the context particularly around the second verse. Wesley has written all of the lyrics, which is an important note. (Ben)

This is a very deep love song. I think it’s like the new Glycerine (by Bush). I think of the song as that. There hasn’t been such a desolate love song in so long. I think Glycerine was just guitar and bass, there were no drums and it was the ‘hit’ of that album – a whole rock album! It was the soft song. Anyway, I feel this song is a perfect example of everything else that is existing on The Lumineers album. And I don’t know hardly anything about it, it’s almost so private to Wesley and I believe him every time he sings it. (Stelth)

One of the correlations of the song that I think is really interesting is that it also eludes to theft. These guys were on tour two years ago in L.A. and they had everything stolen, so I remember hearing Wesley talking about that and I think he connected with that line in kind of a new way after that happened. (Ben)

“Smashed in my car window, didn’t touch the stereo.” The fact that they didn’t grab the stereo left this feeling of, “We’ve still got the music.” (Stelth)

This is kind of another break-up song, realising that you have to go through with something and you have to make decisions whether you want to or not. Maybe things aren’t working out and maybe they can come together at a later time. We actually asked some little kids at an elementary school what they thought the song meant and it was all so innocent. One of them said, “It’s about believing in yourself no matter what your Mom says, no matter what people tell you, you have to believe in yourself.” And that’s what this little kid took out of it – I think it was more powerful than anything we could come up with. (Stelth)

Also, we did a music video for this recently which also brought to the table this notion of keeping your head up. Not necessarily just keeping hope but also keeping a child-like awareness and curiosity throughout your life, having openness. (Ben)

It’s so literal. I think this cast of characters are almost mixed up in this terror between themselves and what is expected of them by the community. But I do remember that Wes said – as he grew up a Catholic and so he had a Priest – that this Priest ended up saying he was leaving the Church because he fell in love and wanted to get married. And you almost get excommunicated at that point, but how can you deny love? All of the stories are kind of wrapped up in that false identity and are about really trying to find yourself. I think there is one about a boxer who is expected to a throw a fight, one about a political figure…it’s a mixture. (Stelth)

This is about Wesley’s Father’s oldest brother, who was drafted and killed in the war. It’s not a pro or anti-war song, this is just what happened. And it was really hard on the family as he was so looked up to and respected. (Stelth)

He wrote that one in Denver. It’s actually one of my favourites. Every time we play it I listen for new things because I feel like there’s a lot hidden in it, and it’s so simple and each part is so clear and so lucid, but there’s also a lot tucked in there. (Ben)

I think it can be misconstrued. It’s really hard to say about a woman, “I need you at home.” But it’s that feeling of being on the road and you understand that your love back home, she’s wild – I think we all have wild girlfriends’ back home and it is one of those things where you think, “I know we’re in this situation with touring all of the time, but the only thing that can keep us sane is coming home and you still being there.” So it’s far less sexist than it can be thought. (Laughs) (Stelth)

I think it’s a really haunting song, about the hardest part of splitting with someone. It’s really vulnerable, “Did you think of me when you made love to him.” (Stelth)

What I get from this song is that it takes place at that juncture where you start feeling like it’s real that you are no longer with this person, you start feeling those ramifications. The other thing about Morning Song is that I think in a lot of ways it doesn’t particularly resolve, which of course relates to that sensation. I think a lot of songs that are about this subject have that specific tone, maybe end on a certain note, but it kind of ends on that idea of uncertainty, and I really like that about it. (Ben)