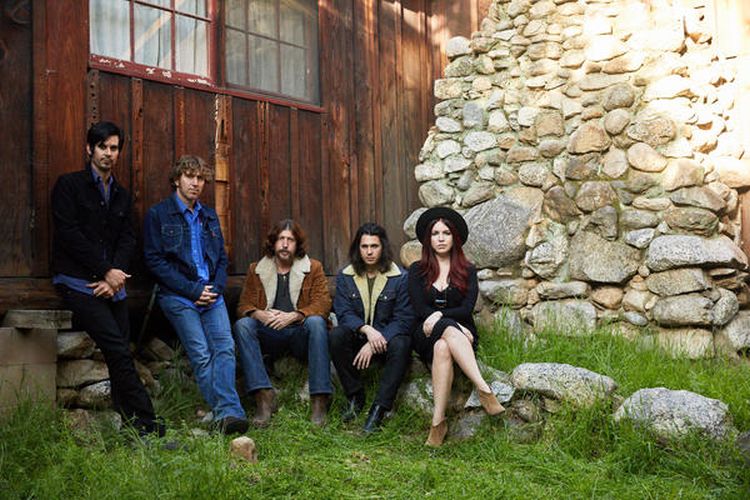 Psychedelic rock-folk-Americana stalwarts THE STEVENSON RANCH DAVIDIANS have unveiled their new single ‚Wack Magick‘. This is the second single from the album ‚Amerikana‘, following up the lead single ‘Holy Life’. Scheduled for European release in 2018. This is the first album The Davidians’ have released since 2009.

”‚Wack Magick‘ is basically about the use of mysticism as a tool for social control. It’s about occultism, mind control, secret societies, hallucinogenic drugs, etc., all of which have been utilized by the predatory elite to mystify the minds of the masses,” says Dwayne Seagraves. Steeped in the aura of the perennially mythologized psychedelic culture of Southern California and making music influenced by the enduring essence of ‘60s psych, folk and soul, woven with strands of early American roots music, The Stevenson Ranch Davidians has, since 2006, revealed itself in shifting configurations.

While the lineup has continually coalesced around lead singer and songwriter Dwayne Seagraves, the collective has always had a guiding vision and goal: to create music that seeks to simultaneously demystify and deify the human experience. ‘Amerikana’ represents a new direction for the band, where the dreamy, flowing sound of albums past is infused with a fresh sense of inspiration, energy and purpose. This is an eclectic, yet cohesive, set of songs that glorify the human spirit while condemning those who seek to destroy it. Seagraves states that ‚Amerikana‘ also celebrates what he views as true magic: human will put to action. Through his songs, he hopes to convey the sense that human beings have been the sole source of all great insights and achievements throughout history, and that power originates from within individuals rather than from gods, governments or other external sources.

The band’s new lineup brings a range of talent, experience and inspiration to The Stevenson Ranch Davidians’ sound. In addition to longtime Davidians’ bassist Jessica Latiolait, guitarist Rob Campanella is a member of The Brian Jonestown Massacre and The Quarter After, while his brother – drummer and backing vocalist Andy Campanella – is a veteran of Occult Wisdom, Imogene and Chief Nowhere. Guitarist Misha Bullock, the sole Englishman in the fold, formerly played with Tennis System.

The Stevenson Ranch Davidians „Amerikana“ LP will be available on Classic Black 150G Vinyl with Lyric Inner Sleeve, but is already available for pre-order on Picture in My Ear Records ‚ Bandcamp at https://pictureinmyearrecords.bandcamp.com/album/amerikana ~ ‚Holy Life‘ and ‚Wack Magick‘ are also currently available on iTunes and Spotify.

In 2017 the band embarked on their first ever tour of the West Coast with a psychedelic roaming festival, curated by the Mad Alchemy liquid light show. They played 9 cities in all, together with LSD and The Search for God, Jesus Sons, Dream Phases, Family of Light Band, and Creature’s Choir. The band also played their biggest show to date in July 2017, opening up for Dean Wareham (Galaxie 500, Luna, Dean & Britta) at the Chapel in San Francisco where Wareham played Galaxie 500’s classic „Today“ LP in its entirety.

The Stevenson Ranch Davidians will be supporting The Brian Jonestown Massacre on select dates in May 2018, with a European tour of their own in the works for October 2018 with El Borracho Booking.

„A flawless raucous composition combining bewildering ‘60s psychedelic spirit, candid rebelliousness and soothsaying, and even manages to tastefully weave in that twang element we usually associate with early American roots music. This is fresh and meaningful, with an in-your-face wake-up call we should all welcome (and even wish on others)“ – The Spill Magazine

„‘Pulls you into a trance with its swaying, lilting in a mix of psonicadelia in what are mere minutes of spacey zen that lend to a sense of timeliness. With vocals as incredibly powerful as James’ vocalist Tim Booth, the energy factor is ideal in this piece of fantastic music mastery“ – Big Takeover Magazine

„Their blend of ’60s-era psychedelic folk with elements of modern indie Americana becomes a form of protest… With woozy atmospherics that echo Kurt Vile and lyrics that veer into the spiritual, the band uplifts without preaching and encourages without chastising“ – The Revue

„Rough around the edges while serene in between. A surrealist Americana soaked dreampop tinged song that is layer upon layer of chord progressed goodness“ – Jammerzine

„High sense of energy with the strong and powerful vocals. They have altered the structure of music by incorporating folk, soul, and 60s psychedelic hints into their sound“ – Big Bad Buckle

„The dreamy, flowing sound of albums past is infused with a fresh sense of inspiration, energy and purpose. This is an eclectic, yet cohesive, set of songs that glorify the human spirit while condemning those who seek to destroy it“ – Power of Pop