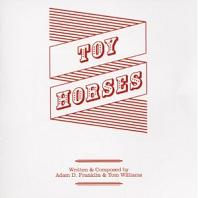 PLAY WHAT YOU WANT

This documents an argument between two band-members – you can probably guess which ones! There’s an ever-present happy/sad juxtaposition that runs throughout the album – melancholy lyrics paired with sing-along melodies. The album may have been dressed up as relatively inoffensive and mainstream sounding but there’s far more darkness and edge to it, hidden just out of sight, that I hope reveals itself with repeated listens.

AND IT WAS YOU

Despite what he’d like to think, the protagonist is not a special case. His problems are everyone’s problems because we’re all like everybody else. It’s a retort to the self-pitying sorts and those that brag of their misery. A deceptively-simple sounding piano ballad that leads to a big pop chorus and ends in a swirling cacophony of sounds.

It’s about a girl not content with the world she’s been handed. She cuts all ties with it and creates one of her own where she controls everything and everyone in it. The walls slowly, and inevitably, begin to fall in on her. Features an electric ukelele melody that accompanies and weaves around the main vocal line..

Musically ‚poppy‘ but lyrically the most harrowing: „I live in fear your white lies will slowly yellow through the years and everyone around will disappear, those you hold dear“. It’s about the urge to pull things apart the moment they start going well and how that irrevocably affects others.

One of Tom’s acoustic, McCartney-esque gems. We only play this song live very rarely but it always creates a ‚moment‘ when we do. I’ve read people online interpreting it as a pretty love song, a tragic suicide song, a cold-hearted break up song etc… I think it’s quietly quite perfect.

LOYAL TO THE CAUSE

It’s a song about writing a song. The world is already completely saturated with them and would cope perfectly well without another one ever existing. What’s the point? The perfect song is unattainable and we probably wouldn’t like it much anyway. It’s a rockier number with some fancy guitar work.

LOVE AT AN ARM’S LENGTH

I think an arm’s length is more than close enough! Alfred Lord Tennyson said „T’is better to have loved…“ and this song wonders whether that’s not the case at all. It’s suprisingly popular for a track with such a strange song structure and no obvious chorus.

I wrote this song in 5 minutes in exchange for some free clothes from a girl called Violet. Melody as currency is a concept that greatly appeals.

NO ONE’S EVER GONNA LEAVE YOU

A song about not wanting to turn into my absent father while aghast at the thought that I may already have. It’s a scratchy, simple little rock song with a 50s guitar solo.

It asks the question: ‚If I go out of my way to ruin everything, will somebody try to stop me?‘ This is our big string-laden one written in Nashville halfway through recording the album. Keen listeners might notice that the outro featues hooks from all of the preceding songs on the album!

There’s an old british fairground theme that runs throughout the artwork. We even visited a gypsy travelling steam-fair and did a documentary-style photoshoot with Lawrence Watson (Oasis, Paul Weller) for the CD booklet. The red part of the logo represents the twisted carousel poles that adorn every stall around the fairground as well as the main carousel. The dots in the ‚Toy Horses‘ text are to look like the thousands of lightbulbs that decorate the whole site.