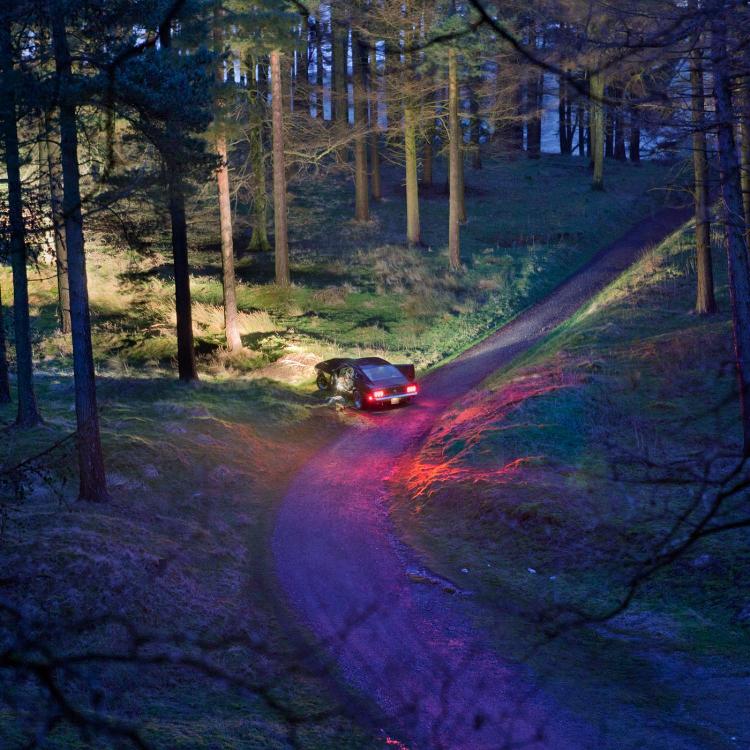 The album was recorded in a couple of small sessions in early 2014 and then in a larger space between September and December after we had come off touring. We were recording with Ross Orton in McCall Sound Studio in a run down part of Sheffield. Ross has recorded albums for The Fall, M.I.A, Arctic Monkeys, Bromheads Jacket and Toddla T. The idea was to build up the most noise possible before the opening track. It sounds like a jet engine, very synthy, like the Tron soundtrack. Ross sort of went into autopilot on this one. Picking up guitars, tuning them to the same note and then recording feedback as all the strings resonate together. There was this thumping club beat bass drum to take you into „Running Wild“ and I really liked it, but it was discarded.

We’d been playing this song since before the first record came out. It’s such a live staple that it would’ve be wrong to have it as anything but the opener from whatever we did next. It’s sort of a pastiche of psychedelic music, the main refrain like final seconds of the theme tune from Countdown, which I got really addicted to last summer. Lyrically, it’s trying to reference Old England by way of Sherwood Forest, Beachy Head and the great fire of London. So not particularly relevant or anything.

We’d originally recorded this at a slightly slower tempo which gave the drums a bit more breathing room, the riff sounded more Sabbthy, but it really drew the vocal out on the chorus and I just sounded like I was yawning, so we sped it up by a couple of BPM and it was a lot tighter and meaner. Lyrically, it’s set on Ringinglow Moor. The moor is a key location for the record because it’s where the scratched CDs are played in “The Woods” and it’s also the moor that is set fire to on the album closer “Have You Forgotten My Name”.

WE CAN DO WHAT WE WANT

The song is like a synopsis for a getaway film. Bonnie & Clyde are mentioned but it could also refer to any number of films; Gun Crazy or Pierrot Le Fou. There’s an energy and excitement on this track, as if you’ve just fallen in love with someone and it feels totally natural to rob all the banks in town. Without a doubt, one of the most poppy bubblegum things we’ve ever done. I was in the states at the start of the year and my cousin sent me a voicemail of her daughter singing along with the chorus. Typically, it get’s a bit too poppy and the narrator reaches an epiphany, that they can do what they want but it’s of no benefit to anyone. The freedom in being able to do anything becomes restricting.

I think we wrote “Favourite Son” the week before the first record came out. It was always intended as a b-side for one of the singles we were going to put out, but we never got it down right. Originally the song comes to a halt and it slows down. „I want him to be yours and I want yours to be mine“ is one of my favourite lyrics on the record. On the last record, I was just messing around with terms of endearment and the subject of love. On this album, I was trying to move away from the concept of love and more towards how it impacts on relationships and what it can bring out in people. “Favourite Son” definitely displays the most distorted of these relationships where the narrator is seeking a relationship based out of favouritism.

It’s the quickest we’ve ever written. When we started the band, we ran on a ‘no chorus’ policy. On most of the first record, there might be a musical piece that represents a chorus on a lot of the songs, but we’d always steered clear of that thing. When we were writing “The Snake”, we had the verse and the bridge part sorted and we kind of assumed the song was done, but then I could hear the chorus coming through. I asked Rory to shut up playing drums for 5 minutes and it was done. The middle 8 section is set in the lagoon from the 1989 BBC adaptation of C.S. Lewis’ Voyage of Dawn Treader where Eustace turns into a dragon. We used to watch that series all the time on VHS from our library when we were kids.

One day we came into the studio and Ross kept telling us about this new Arabic cafe that he’d just been to down on the Wicker. He said he’d had a shish kebab and a naan as big as a table. The next day Rory and I went for breakfast there. The name of the restaurant is Diyafa, which is an honour code of the Bedouin which states that anyone must be kept fed and given somewhere to stay if they need it. The song is a sort of sequel to “We Can Do What We Want” where the runaway couple has begun to tire of each other and all that excitement and energy is depleted and nothing else is going to help them out. In the end, and to their relief, they run away to the forest and make a bid to spend one final night together and when they wake up in the morning, without saying a word, they go separate ways. The first chord of the last chorus is this great swelling burp of a guitar noise. I’d recommend you listen to the record as loud as possible to get maximum enjoyment out of it, but that fuzzy burp sound sounds really great when it’s cranked up.

I went for a walk with my dad along the snake pass and up onto Bleaklow Moor. Bleaklow is famous for having a couple of plane wreckages from the Second World War where planes would pass too low over the moor in the fog and crash. It was a hot day at the beginning of October and we went through this small wood next to a stream that brought us out where we’d parked the car. I don’t know what went on, but the trees were releasing a lot of spores and I must have breathed too many in. I was really raspy for about 3 months after that, so I went to a doctor. They said everything was alright. Anyway, that’s what this song is about. Rory likes to refer to the guitar solo in this as the Fleetwood Mac bit. Make of that as you will. I really like how light and simple this track starts off as and then at the end it’s one of the heaviest guitar sounds on the record.

I tried to fit a breather in the record at this point. It was always my intention to include an instrumental. We spent ages figuring this one out. It just sounded really basic in the beginning. There was nothing there to make it worthwhile for the record. Ross told me to go mental for 6 minutes with the guitar and a delay and a fuzz pedal. I just put the guitar on my lap and strummed the strings behind the neck and on the bridge and pushed the strings off the fretboard to make a screaming screeching sound. Ross cut the track in half and panned it left and right and there was this really discordant thing going on. The track sounded really uneasy and menacing. We began to orchestrate the noise so as the song carries on, it gets wilder and messier. Halfway through the second verse pattern there’s this sound that comes through like a chain being smashed on the floor. I’m really proud of that sound.

STANDING IN THE COLD

The big ballad of the record. It’s about mistrust of relationships and it all ends really bleakly with a car being burnt out. Most of our artwork/videos seem to stem around cars. I’ve no idea why. I’m not a petrol head or anything, but I really like them. They are the ultimate invention. We’d come off a really heavy bout of touring and got this down in the studio, so if my voice sounds a little husky then that’s why. As well as a no chorus rule when we started out, we also had a no guitar solo rule, so with that rule fully out of action I really went for it on this song.

HAVE YOU FORGOTTEN MY NAME?

We’d tried a version of this in the summer, stripped apart Rory’s drum kit and recorded two separate drum parts which were really unusual. It didn’t sound as fluid as Rory’s style of playing, but for the final version we just took it live. The track is separated into two parts so there’s a really noticeable change in drum sound when the track moves on from its final chorus into the instrumental part at the end. The plinky sound that runs through the first half is the sound of playing behind the bridge on my jazz master. I remember thinking that this was the album closer, but when we went for the first vocal take I could see it just wasn’t working. As we were going through it I noticed there was a really nice harmony to be had and it matched up perfectly with the chorus and everything. At the end of the song, we were recording through a tape delay and Ross just flicked it off. The record comes to a standstill. It’s like a big final sigh.